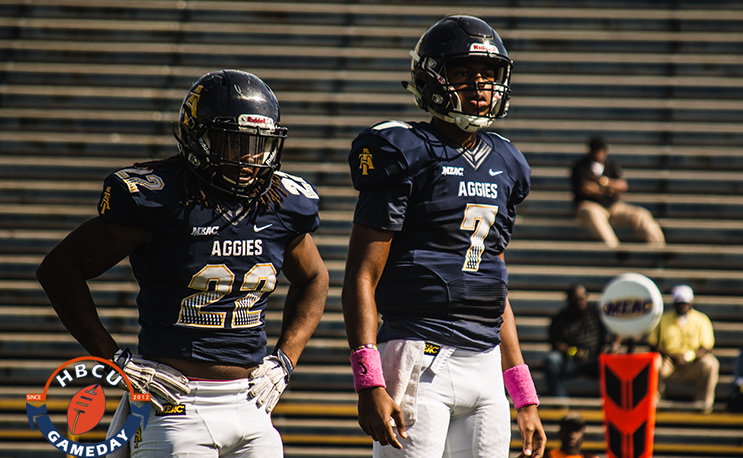 North Carolina A&T answered the bell against Bethune-Cookman as it came up with a come-from-behind win to stay perfect.

North Carolina A&T coach Rod Broadway, with his team’s 24-20 win over Bethune-Cookman secure in his back pocket, leaned forward in his seat and spoke candidly about why his team continues to get its opponents best efforts.

All he was missing was a “because Stone Cold said so.”

Broadway and his team had reason to feel good about their hot start, as the win moved them to 4-0 in the MEAC, keeping pace with Hampton as it beat Florida A&M earlier in the day.
[postBannerAd]

Raynard gets it done

A&T used three touchdown passes from quarterback Lamar Raynard and solid running by Marquell Cartwright to improve to 8-0 despite a solid effort from Bethune-Cookman. BCU led 20-14 in the fourth quarter before Raynard found Trey Scott for a four-yard scoring strike which put A&T up for good.

The first of Raynard’s scoring tosses came on a short pass that Jaquil Capel took 62 yards down the right sideline to give A&T a 7-3 lead. BCU would briefly take a 13-7 lead in the second quarter when Larry Brihm hit Frank Brown for a 30-yard score with 8:37 to go in the second.

Raynard, who was added to the Payton Award Watch List earlier this week, finished 11-for-25 with 177 yards to go along with his three scores and no interceptions. He also got the chance to catch a pass in the fourth quarter, and nearly scored.

“I should have scored,” Raynard said after the game. “It was a great call by coach Hester, but really I just wanted to make the catch. As long as I made the catch, I knew we would be in the red zone. It was a great throw by Jaquil too.”

He also became just the fifth quarterback in Aggie history to cross the 2,000 yard passing mark in a single-season. Not that it mattered too much to him.

“It’s big time,” Raynard said of his latest feat, “but right now, I’m not really thinking about all that. I’m just trying to win.”

So far, so good in Greensboro.