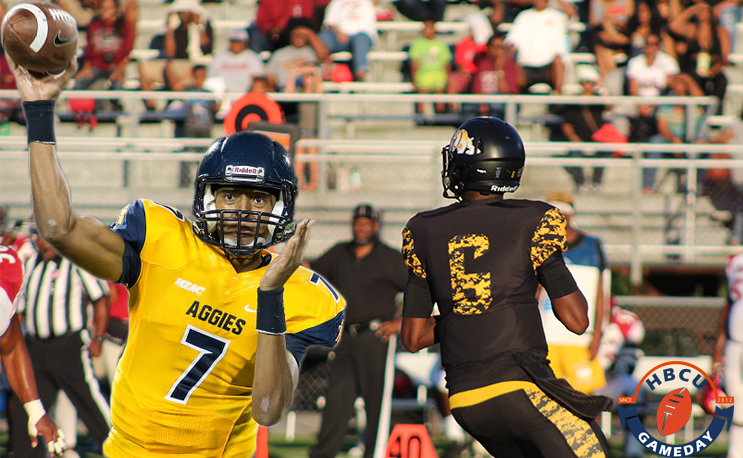 The top teams in HBCU football are all benefiting from good-to-great quarterback play.

Having a good quarterback is very important to the success of a team. The quarterback is the guy who gets the blame for a loss and all the credit in a win. HBCU football recently has put the world on notice on a national level, with four teams ranked across the FCS and Division II, and they all have one thing in common: Solid quarterback play.

Here are the guys that are getting it done at a high level through the first month of the season, and their teams are benefitting from it.

Raynard ended last season on fire for the Aggies,  but was overlooked due to the other stars on the team such as Denzel Keyes and Tarik Cohen. Raynard has picked up right where he left off last year for the Aggies leading them to a perfect 4-0 record, with an upset win over FBS UNC-Charlotte and to a no.13 ranking in the latest FCS Coaches Poll. Raynard has completed 71.6 % of his passes for 1,011 yards, 12 touchdowns and most importantly 0 interceptions so far this season and has the Aggies hoping for a return to the Celebration Bowl.

Coming into this season everybody in the country has expected Kincade to keep up his stellar play from a season ago that made him runner-up for the Deacon Jones Award last year. Kincade’s impact on Black College Football was to the point that other former SEC quarterbacks in Treon Harris (Tennesee State) and Elijah Staley (Morgan State) decided to go to the HBCU route, something we called the “Kincade Effect.”

Kincade was the pre-season favorite for the award this year after leading Grambling to a Black College National Championship. Kincade has the Tigers right on track this year leading them to a no.19 ranking in the latest FCS poll with a 3-1 record. Kincade so far this year has over 600 yards passing (669) and over 100 yards rushing (166).

Amir Hall has been nothing short of amazing so far this year. The reigning CIAA Player of the Year, like Kincade and Raynard has picked up right where he left off from 2016. Hall has the Bulldogs undefeated and ranked no.21 in the latest AFCA Poll for Division II. Hall has the Bulldog offense averaging an astounding 55.3 ppg.

The Bulldog offense has scored 142 points in the last two weeks after a win in a big CIAA showdown against Winston-Salem State. Hall has a total of 21 touchdowns (17 passing, four rushing) with 1308 yards while completing 70% of his passes and no interceptions.

Howard isn’t ranked, but it did receive a vote in the FCS coaches poll, and Caylin Newton is a big reason why. Newton lit the world on fire the first game of his college career after helping Howard pull off the biggest upset in college football history against UNLV. He and his teammates have brought the excitement back to The Mecca.
[postBannerAd]
The younger Newton has quickly made a name for himself already winning MEAC Offensive Player of the Week twice this season. Newton in the “Go-Go” offense brings a different type of game to the quarterback position. Newton is the true definition of dual threat. He has a total of 11 touchdowns, (four passing, seven rushing) including the game-winner against Bethune-Cookman, with 705 yards passing and 388 yards rushing.

Like Howard, Alcorn State isn’t ranked, but it is also a Celebration Bowl contender thanks to its star quarterback. Two years after he burst on the scene running wild on the SWAC, LeNorris Footman has transformed himself into a complete quarterback. The senior is completing 62 percent of his passes and throwing for 933 yards in just four games. He’s also run for 222 yards and a couple of scores.

The exposure that HBCU football has received has everything to do with the level of quarterback play. HBCU football’s glory days coincide with great quarterback play like in the 90s with Steve McNair, Jay Walker, Greg Clark, Ted White, Tory Woodbury and several others.