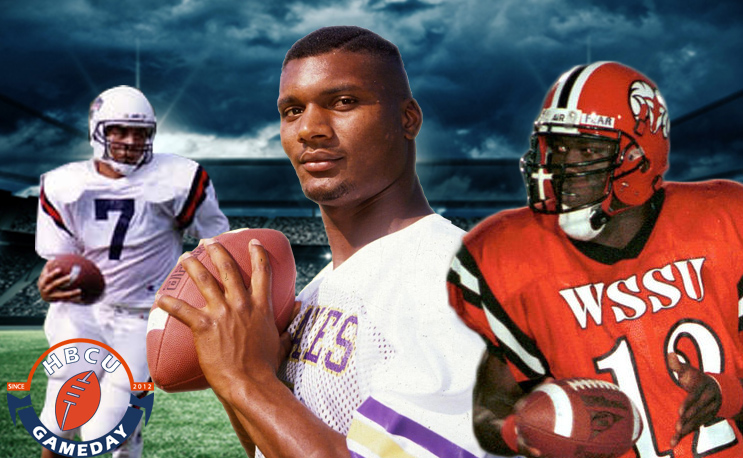 A look at some of the HBCU signal callers from the 1990s.

I’m a quarterback  who appreciates the history of HBCUs and the position. I played at Bowie State University at the start of my career and have done some great things but I have not nearly accomplished the things that some of the people ahead of  me nor counterparts have accomplished.

There is a new school of elite quarterbacks in my eyes, but first we must pay homage to some of the folks who paved the way.

In 1993 the HBCU and college football world was taken by storm by the original “Big Three. This trio consisted of Virginia State’s Greg Clark, Howard’s Jay “Sky” Walker and Alcorn State’s Steve “Air” McNair. College football during that era, especially at the HBCU level,  were won on the ground.

“Five wide receivers and three-by-one sets were never seen before” Clark said. He went on to say that he credited people before him who paved the way for him.

“Earl Harvey of North Carolina Central is a guy he came before all of us and was lightening it up back then throwing for a lot of yards.”

Harvey, who also went by “Air” lit up the CIAA for over 10,000 yards through the air which during the mid-1980s was an NCAA record. In 1993, Clark and Steve McNair of Alcorn State both went over 3,000 yards passing for the year and 30 touchdowns which was ABSURD at the time!

“It’s about legacy and passing the torch down to the next guy “ Clark said, “it’s such an honor and privilege.”

McNair was just a junior in 1993, throwing for nearly 3,200 yards and 22 touchdowns. He was even better in 1994, as he earned Heisman recognition and entered the NFL draft in 1995 as the number three pick by the Houston Oilers. The rest, as they say, is history.

A year later Tory Woodbury, a local walk-on with a rocket arm, started his career at Winston-Salem State and eventually led the school to to back-to-back CIAA championships.

”It’s a pride thing, being a HBCU quarterback and I take great pride in being one.“

Woodbury didn’t leave his mark by playing in a spread offense and throwing it 40-50 times a game. Instead, he was in more of a pro style-I formation offense, but teams still saw the talent in Woodbury and knew he could make difference in the league. Woodbury credits his success and journey to the NFL to his work ethic at WSSU.

“I separated myself while I was at college, people will tell you that because my goal was to go to the NFL,” Woodbury said. “I watched film and did all the extra little things to help prepare myself for when I got there.I had to work my butt off because I only played four games of high school football at quarterback.”

Woodbury would go on to make the NFL as an undrafted free agent and would play with the New York Jets, New Orleans Saints and Buffalo Bills.

As great as these guys were, along with quarterbacks like Howard’s Ted White and FAMU’s Pat Bonner, Clark and Woodbury they believe the New Era of HBCU quarterbacks is in good hands as well.

Clark said this new era of HBCU quarterbacks reminds him of his era. Woodbury, now offensive coordinator at Johnson C. Smith, also believes that this is a great class and  they are doing great things.

“I think this is a good era, I believe were in good hands and I believe there ahead of the curve than were I was at a quarterback. They are well on their way.”

Note: Nyema Washington is a former quarterback for Bowie State University. He is currently pursuing a career in journalism.