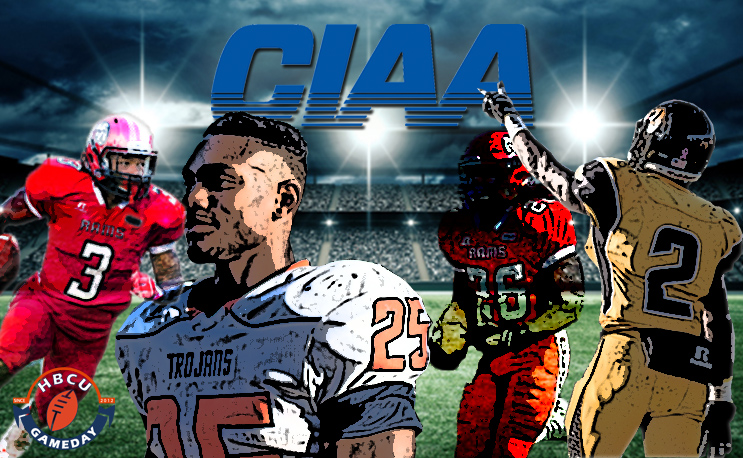 CIAA football has several home run hitters at running back heading into 2017.

The CIAA will hold its Media Day in Salem, VA on July 20. We’ll look ahead at the top quarterbacks, running backs and receivers in the conference leading up to Thursday.

Bowie State’s Amir Hall won the CIAA Offensive Player of The Year award in 2016, and rightfully so. But there is no doubt that Cannon is the most dangerous offensive player in the CIAA and one of the best in all of D2 Football.

The Hampton, VA native was picked as our top D2 back heading into last season and he did not disappoint. Cannon rushed for 1,214 yards in 2017 despite splitting carries with Kevon Bellamy, who also rushed for 1,000 yards. He averaged a staggering 7.2 yards per carry and scored 18 times on the ground, numbers pretty similar to what Tarik Cohen did at North Carolina A&T.

Cannon is a threat to score any time he touches the ball (just ask Bowie State and Tuskegee) and a legit NFL prospect with athleticism that is just unfair at the D2 level.

This is the toughest spot to fill on this list. Either of the two WSSU backs could be up here as well, but we had to give the nod to Chesson. While Hall and Manns got most of the attention from defenses, Chesson rushed for a quiet 1,128 yards for Bowie State while scoring 11 times on the ground. He’s also a solid receiver out of the backfield, as he scored four touchdowns via the air and averaged a respectable 10 yards per catch.

Like Hall, it will be interesting to see how Chesson performs this season with Manns gone. Will he get more touches per game? Will he be as effective if defenses start sneaking up a safety without having to double-team the big guy?

WSSU has an embarrassment of riches in the backfield with these two. Hurse came out of nowhere in the Catawba game to establish himself as one of the top backs in the conference, averaging 101.9 yards per game and finishing just under 1,000 yards. He was sharing carries with Moore before an injury ended his season after nine games, as he averaged just under seven yards per carry.

Moore started off the season slow, rushing for less than 100 yards in WSSU’s first four games. He started to flash the potential that made him a Duke commit as a high school senior vs. Lincoln; rushing for 179 yards and three scores on just nine carries. He finished the season absolutely on fire, rushing for 120-plus yards in each of his last four games, including a 177-yard performance against Bowie in the CIAA title game. He finished the season with 1,059 yards with an impressive 6.7 yards per rush average and scored 11 touchdowns (nine on the ground.)

Both backs are big play guys, with Hurse consistently hitting triples while Moore is a threat to knock it out of the park every time. If both backs can stay healthy, WSSU will be scary to defend again in 2017.

Green had an impressive rookie campaign in 2016, rushing for 1,150 yards, good for third in the league and more than anyone else on this list besides Cannon. So why is he fifth? Green was more of a volume runner than his elders, averaging a respectable 5.3 yards per carry. Very good (two runs equals one first down) but not out-of-this world like the others. But as the youngest on this list, he should be here for years to come.