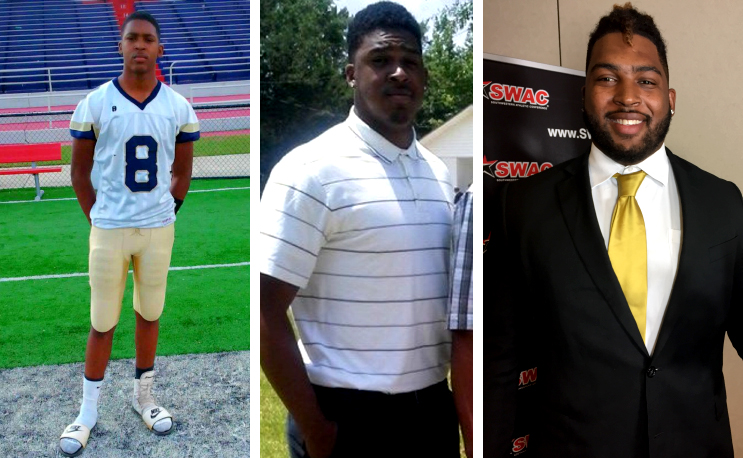 In three years Howard has outgrown everything but his nickname

No matter what Tytus Howard does on the football field as the starting left tackle for Alabama State, he will never be able to live up to the nickname he earned in his hometown of Monroeville, Alabama. Dare say no matter what he does, it would be physically impossible to do so.

Monroeville is a great place to receive your nickname. It  was named the “Literary Capital of Alabama” in 1997 after giving birth to great writers like Nelle Harper Lee and Truman Capote.  If nothing else the good folks of Monroeville certainly know a thing or two about words.

Monroeville has a population of just over 6,000 people and it’s unlikely that many people there can look Howard directly in the eye and maybe no one can physically look down on him.  His frame is every bit of 6’6 with a massive 305 pounds slapped on for good measure, a lot of that muscle. When working out he bench presses 375 pounds, roughly the weight of a piano or a motorcycle.

During his high school days Howard didn’t see any time at left tackle, he benefited from them.  He was a quarterback, listed at 6’2 and just 200 pounds. Reggie Barlow’s staff at ASU ultimately recruited him as a tight end and when he arrived on campus he just could bench press his own body weight.  Over the course of the next year he would totally redefine the concept of the “Freshman 15” with a combination of hard work and genetics.  Howard hit a late growth spurt and grew four inches his first year in school, he also hit the weight room and went from being able to lift a refrigerator to the aforementioned piano.

Not only did Howard gain the height and bulk but he kept the speed and athleticism from his past life as a 200-pound quarterback. Combine that together and you have a starting left tackle in the SWAC that coach Brian Jenkins thinks has a pretty good shot at the next level, just like his teammate and fellow offensive lineman Jylan Ware who was drafted by the Oakland Raiders this past spring.

So it would be quite normal if by now people would affectionately call Howard things like “Big Man,” “Big Dog,” “Hoss” or anything that reflected his girth.  Around campus maybe they do, but when he makes that 100 mile drive home down Interstate 65 and pulls into Monroeville they refer to his size a little differently.  It was there that this massive young man earned what may be the most ill fitting nickname in all of the SWAC:

“They call me, Weenie,” Howard said with a slight grin.

A name he should have outgrown by now but the juxtaposition between his past and his present is actually captured beautifully with that one word.

Yet another great literary feat for the Literary Capital of Alabama.