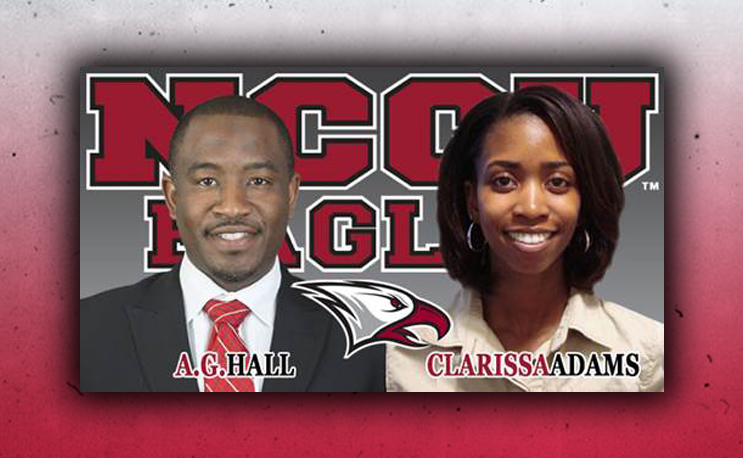 Hall, who was an assistant for the Lady Eagles when they advanced to the NCAA Division II Tournament on back-to-back seasons at the start of the millennium, returns to the NCCU coaching staff after having gained head coaching experience.

He spent four years as head coach at Winston-Salem State University from 2012-16, which included a pair of 15-win seasons. The Rams 2012-13 squad under Hall was ranked No. 2 in NCAA Division II in team defense, allowing just 51 points per game.

“Adding the wisdom and experience of A.G. is something I am very proud of,” said Stafford-Odom. “I have seen him operate with professionalism throughout his coaching years. He has a calming demeanor and a motor that motivates players to push harder. For me to find an individual who walked the path of a collegiate athlete here at NCCU and who has posted winning seasons as a college head coach, I am thrilled.  I know the influx of knowledge A.G. will share will help move our program forward.”

Hall has a total of 16 years of collegiate women’s basketball coaching experience, which features 10 years as an assistant at the Division I level between Providence College (2002-08), Clemson University (2008-10) and Bethune-Cookman University (2010-12).

After graduating NCCU with a Bachelor of Business Administration (B.B.A.) with a major in accounting in 1998, Hall started his coaching career at his alma mater for two seasons from 2000-02. The Lady Eagles went 49-13 over that span, winning consecutive Central Intercollegiate Athletic Association (CIAA) Western Division titles before advancing to the NCAA Tournament both seasons. The 2001-02 team in Hall’s second season won its first two tourney games before being eliminated in the round of 16.

Hall played 58 games for the Eagles and was a teammate with current NCCU head men’s basketball coach LeVelle Moton.

Adams will serve as the director of basketball operations at NCCU after spending the past decade with the women’s basketball program at the University of North Carolina.

While in Chapel Hill, Adams served as the director of student-athlete development/recruiting assistant under the leadership of Naismith Memorial Basketball Hall of Fame inducted coaching legend Sylvia Hatchell since 2007. Her tenure at UNC included two seasons with Stafford-Odom, who was an assistant coach for the Tar Heels from 2011-2013.

“There was an instantaneous aura of professionalism when I met Clarissa years ago,” said Stafford-Odom. “Her uncanny ability to promote positive alternatives and to bring resolve to situations that appear unresolvable render her invaluable. Clarissa will be an essential resource to our student-athletes as they navigate their way through college and prepare for life after athletics. She will bring life to the community and media presence of women’s basketball, and she will effectively communicate the daily and long term direction of our program.”