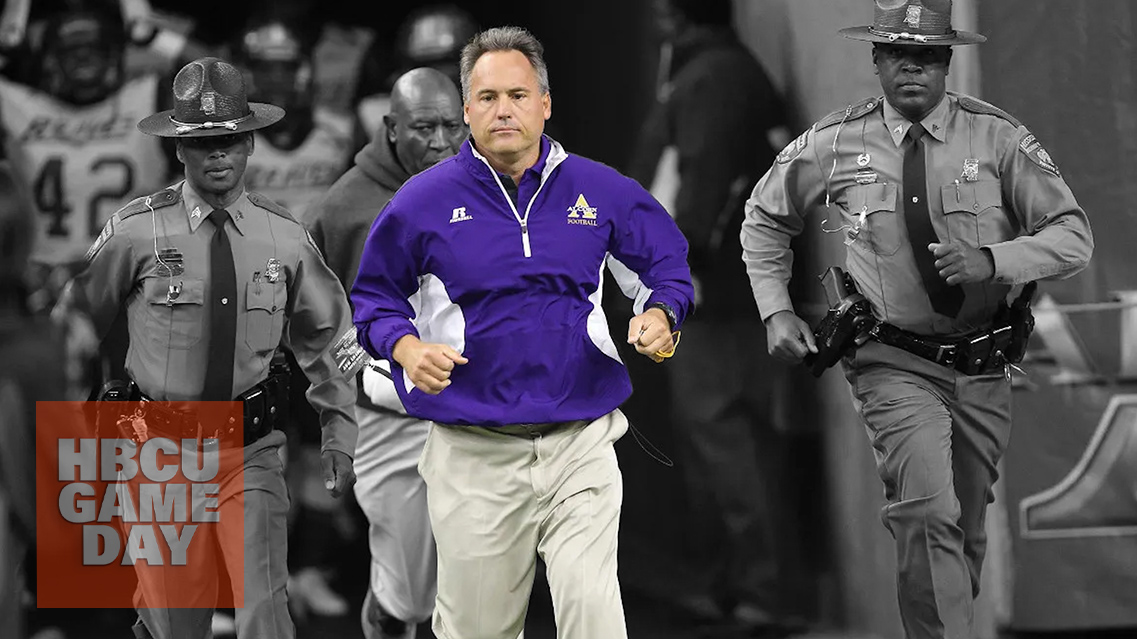 Column: Either Jay Hopson is a unicorn, or black HBCU coaches are being ignored

Jay Hopsen was at Alcorn State for a good time, but not a long time. Why aren’t other HBCU coaches able to do the same?

Something very rare happened on Saturday night. For just the second time in history, a coach from a historically black college was hired by a predominately, FBS school as Southern Mississippi lured Jay Hopson from Alcorn State.
That’s great news for black college football coaches, right?
Not quite.
If you follow HBCU football, of course, you know that Hopson is white. While that doesn’t change or lessen what he did at Alcorn State, it does show that black coaches at HBCUs aren’t being taken seriously by FBS programs.
First, lets give Hopson credit for what he did at Alcorn State. ASU had suffered five straight losing seasons when he took over in 2012. After going 4-7 his first season, the team was 28-10 his last three years in Lorman, winning the SWAC Championship in each of his final two seasons.
It’s been a great turnaround. Anyone involved with Alcorn or the SWAC will tell you that.
But let’s be honest, the SWAC isn’t the cream of the crop in the FCS. In fact, it’s closer to the bottom. The conference has never won a playoff game, and Hopson’s Alcorn State team lost to North Carolina A&T in the first-ever Celebration Bowl.
Throughout the years, other HBCU coaches have had more success than Hopson, yet they were never able to pick up a BCS job. And we’re not just talking about coaches who started their careers in a segregated world like Jake Gaither and Eddie Robinson.
William “Bill” Hayes coached at two historically black colleges from 1976 through 2003. During that period, he won 195 games at Winston-Salem State and North Carolina A&T, winning three conference titles at each school.
Billy Joe won 243 games in 33 seasons, including two NAIA championships at Central State. Never got an FBS job.
Let’s look at current coaches.
Rod Broadway has won 106 games since 2003, winning conference titles at three different schools in three different leagues. He also beat Hopson’s Alcorn team 41-34 in the Celebration Bowl. No FBS job. And he’s a North Carolina alumnus.
Brian Jenkins won 46 games in five seasons at Bethune-Cookman, getting all or a share of the MEAC title four times during that span. Instead of moving up to an FBS job, he ended up in the SWAC at Alabama State.

To this date, only former South Carolina State coach Willie Jeffries has been given a shot to coach a PWI Division I team after heading an HBCU . Jeffries was hired by Wichita State to run its program back in the late 70s before returning to SC State.

For years there has been a belief that coaching at an HBCU creates a stigma for black coaches and basically serves as a glass ceiling. Until a black coach from a black school gets a chance to run an FBS program, Hopson’s hiring only further adds fuel to that fire.
Column: Either Jay Hopson is a unicorn, or black HBCU coaches are being ignored