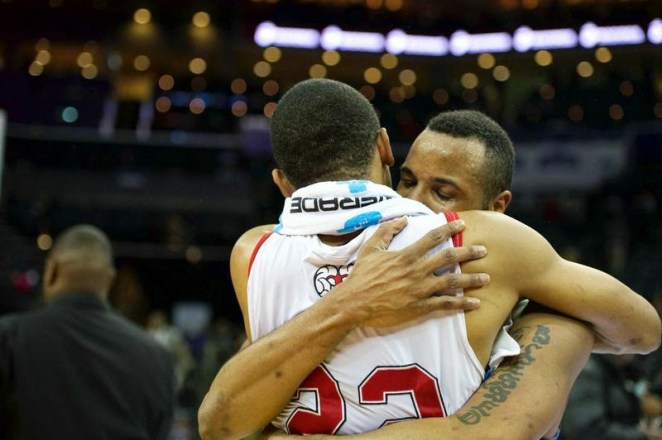 Mayo and Bazemore, not shootings, embody what the CIAA is about

While the mainstream media in Charlotte focused on looking to tie unattached events to the CIAA Tournament, more relevant stories were missed.

The moment that everybody should have been talking about at the CIAA Tournament went largely unnoticed.

Shortly after the buzzer of the championship game, Livingstone’s Eric Mayo and Winston-Salem State’s WyKevin Bazemore met near mid-court and embraced each other. This wasn’t just the customary half-hug that African-American men have been giving each other for at least the last half-century and that the sports world has adopted. It was deeper than that.

See, despite wearing different colors, Bazemore and Mayo are both cut from the same cloth. Two small-town North Carolina guys–Bazemore from the coast and Mayo from outside of Charlotte–who were overlooked by Division I schools, more so because of their size than skill. Both players came to Winston-Salem State to play for Bobby Collins.

Bazemore eventually became a star at WSSU, winning Rookie of The Year and All-Conference honors in 2011-2012 as the Rams went on to win their 11th CIAA Tournament title in school history. He would go on to win them all four years, something that only three other players (Charles Oakley, Ralph Talley and Antwain Smith) had done in the history of the 103-year-old league.

Mayo would find stardom in the CIAA, but it wouldn’t be at WSSU and it wouldn’t be immediate. After two years, Mayo left WSSU, traveling half an hour south on Highway 52 to play for Livingstone, a school that had never won a CIAA title.

//platform.twitter.com/widgets.js In the interim, one of Mayo’s biggest cheerleaders was WyKevin Bazemore.

“He called me constantly and his words was ‘I don’t care where you guy, I just want to see you back on the court,” Mayo said on Friday. “It’s nothing but love there, but he’s a tough player.”

“Even though Eric made the transition to Livingstone, I still love him like a brother. We talk to each other almost every week,” Bazemore said before the championship game.

The Blue Bears and Mayo finally broke through in 2014, beating the Rams for the school’s first-ever CIAA Championship. Mayo was largely a complimentary player on that team; guards Mark Thomas and Jody Hill were the stars, and he was the cleanup guy, battling down low for any scraps that may have fallen from the basket.

This season, both players served as the heart and souls of their teams. WSSU and Livingstone split their season series at one game each. Both players were named to the all-conference team and helped them back to the championship game. This was their moment.

And then, just before halftime, news broke of a shooting at a party thrown in another part of town. Shots were fired at one of seemingly hundreds of “day parties” going on around Charlotte. Blogs and media around the country picked up on the news, connecting it to the CIAA when in fact, the event was not in any way affiliated with the conference.

That didn’t matter, though. Perception is reality, and once again, the conference had to put out a news release about an event that it wasn’t even involved with, but that it would ultimately have to answer for.

Meanwhile, Bazemore and Mayo bought fought furiously to try to pick up their second conference titles in their collegiate careers. Bazemore capped his career with a 24 point, eight rebound performance, while Mayo’s 22 points and 7 rebounds helped Livingstone come away with a 106-91 win.

When it was all over, the two teammates-turned-rivals embraced each other. For that moment, nothing else mattered. Not who was performing at the Epicenter. Not who had a booth at Label. Not a party “hosted” by a rapper that couldn’t tell you what the CIAA stood for if his revoked probation depended on it.

Long after every one forgets about all of that, these boys-turned-men will have their names inked along among legends like (Earl) Monroe, (Charles) Oakley and  (Ben) Wallace and dozens of others who have played in this one-of-a-kind conference.

The league doesn’t get top-talent anymore–it hasn’t had a player drafted into the NBA in more than a decade. It doesn’t have the biggest HBCUs any more (nearly half of the 18 teams that made up the league when the tournament was created in the 1940s are gone). But what hasn’t changed about the CIAA is the impact that its institutions are having on the lives of young people.

That, is what the CIAA is all about.

Mayo and Bazemore, not shootings, embody what the CIAA is about