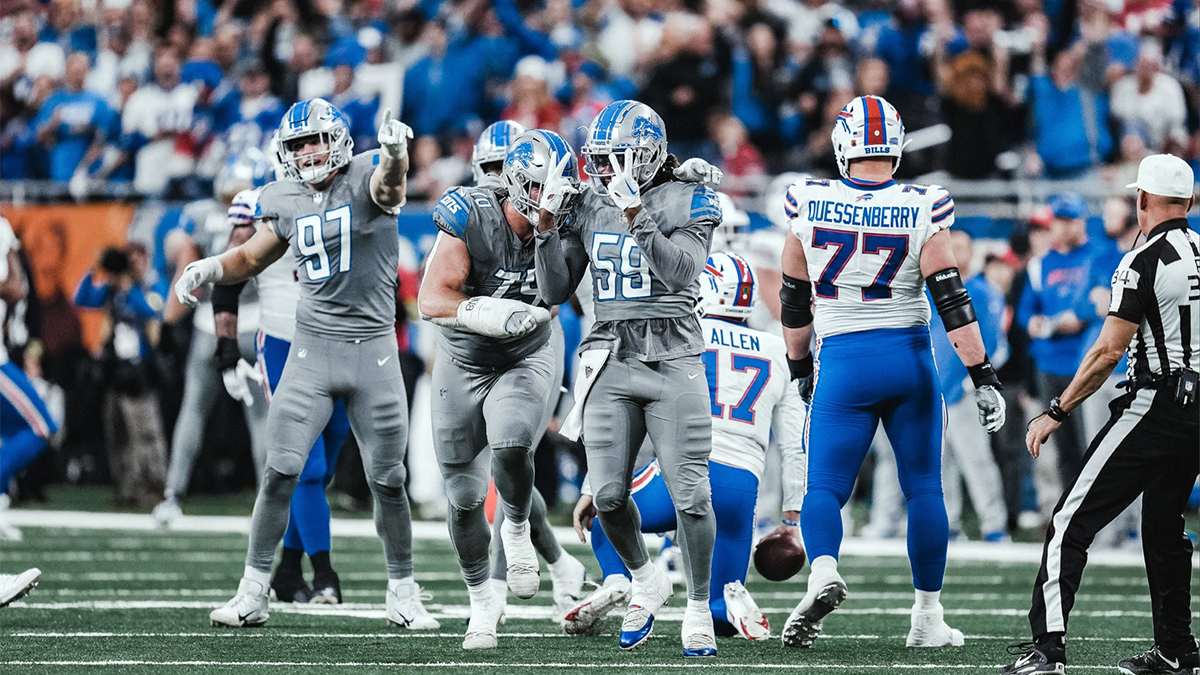 Detroit rookie linebacker James Houston (#59) out of Jackson State got his time in the spotlight on Thanksgiving Day. Check out Houston’s exploits and all the other HBCU NFL standouts in this week’s report.

This has been an NFL season where HBCU rookies and veterans have had a time in the spotlight. Detroit rookie James Houston gets his in this week’s HBCU NFL report.

The first-year linebacker out of Jackson State was taken in the sixth round of this year’s draft by the Lions. He played in his first game of the season in Thursday’s Thanksgiving Day matchup against the Buffalo Bills.

The Lions PR department says it’s the first time in history a rookie has posted two sacks in his first NFL game.

For JSU, Houston posted 16.5 sacks a year ago. He finished second in the SWAC and the FCS. His sack total was only behind Buck Buchannan Award winner Isaiah Land of Florida A&M (19 sacks).

On Thursday, he also recovered a fumble on special teams. He showed some of the same explosiveness and relentlessness he displayed for Deion “Coach Prime” Sanders at JSU on Thursday.

The Lions elevated Houston from the practice squad, where he has languished all season, for Thursday’s game. On Monday, he was promoted to the Lions’ active roster.

Here’s a video of his first sack.

Here’s a video look at the second sack as he chased and ran down Allen.

In his postgame interview, Houston said this is what happens when preparation meets opportunity. He also said it is a continuation of his play at Jackson State.

– # 59 JAMES HOUSTON, OLB, Detroit (1st season, JACKSON STATE) – In his first NFL action, Houston had two solo tackles, both sacks for -16 yards on defense, and a special teams’ fumble recovery on a kickoff return in the Lions’ 28-25 Thanksgiving Day loss to Buffalo. He played just five (6%) defensive snaps and ten (38%) on special teams.

– #60 NICK LEVERETT, OL, Tampa Bay (2nd season, NORTH CAROLINA CENTRAL) – Leverett started at left guard in Bucs 23-17 loss to Cleveland. The Bucs’ rushed for 96 yards and passed for 246 yards with two TDs while giving up three sacks. Leverett was in on all 69 offensive plays (100%) and three (10%) plays on special teams.

– # 72 TERRON ARMSTEAD, OT, Miami (10th season, ARKANSAS-PINE BLUFF) – Armstead started at left tackle for the Dolphins in their 30-15 win over Houston. Miami rushed for 66 yards and one TD and passed for 305 yards and a TD while surrendering five sacks. Armstead only played 37 offensive snaps (49%). According to team reports, Armstead suffered a strained pectoral injury during the game that will cause him to miss some time.

– #23 JOSHUA WILLIAMS, DB, Kansas City (1st season, FAYETTEVILLE STATE) – Williams started at defensive back in the Chiefs’ 26 10 win over the LA Rams and had one solo tackle, one assisted tackle and a pass break-up. Williams logged all 54 (100%) of the defensive plays and 14 (58%) of the special teams’ plays.

– #33 ANTONIO HAMILTON, DB, Arizona (7th season, SOUTH CAROLINA STATE) – Hamilton started at cornerback in 25-24 loss to the LA Chargers and was credited with five solo tackles and one pass defended. Hamilton  was in on 61 (92%) of the defensive plays and three (11%) on special teams.

– #97 JAVON HARGRAVE, DT, Philadelphia (7th season, SOUTH CAROLINA STATE) – Started at defensive tackle in 40-33 win over Green Bay and finished with one solo tackle and two assists. Hargrave was in on 31 (63%) of the defensive snaps and six (19%) of the special teams’ snaps.

– #90 GROVER STEWART, DT, Indianapolis (6th season, ALBANY STATE) – Started at nose tackle in 24-17 loss to Pittsburgh Monday night and finished with one solo tackle. Stewart was in on 49 (71%) of the defensive plays and and 11 plays (42%) on special teams.