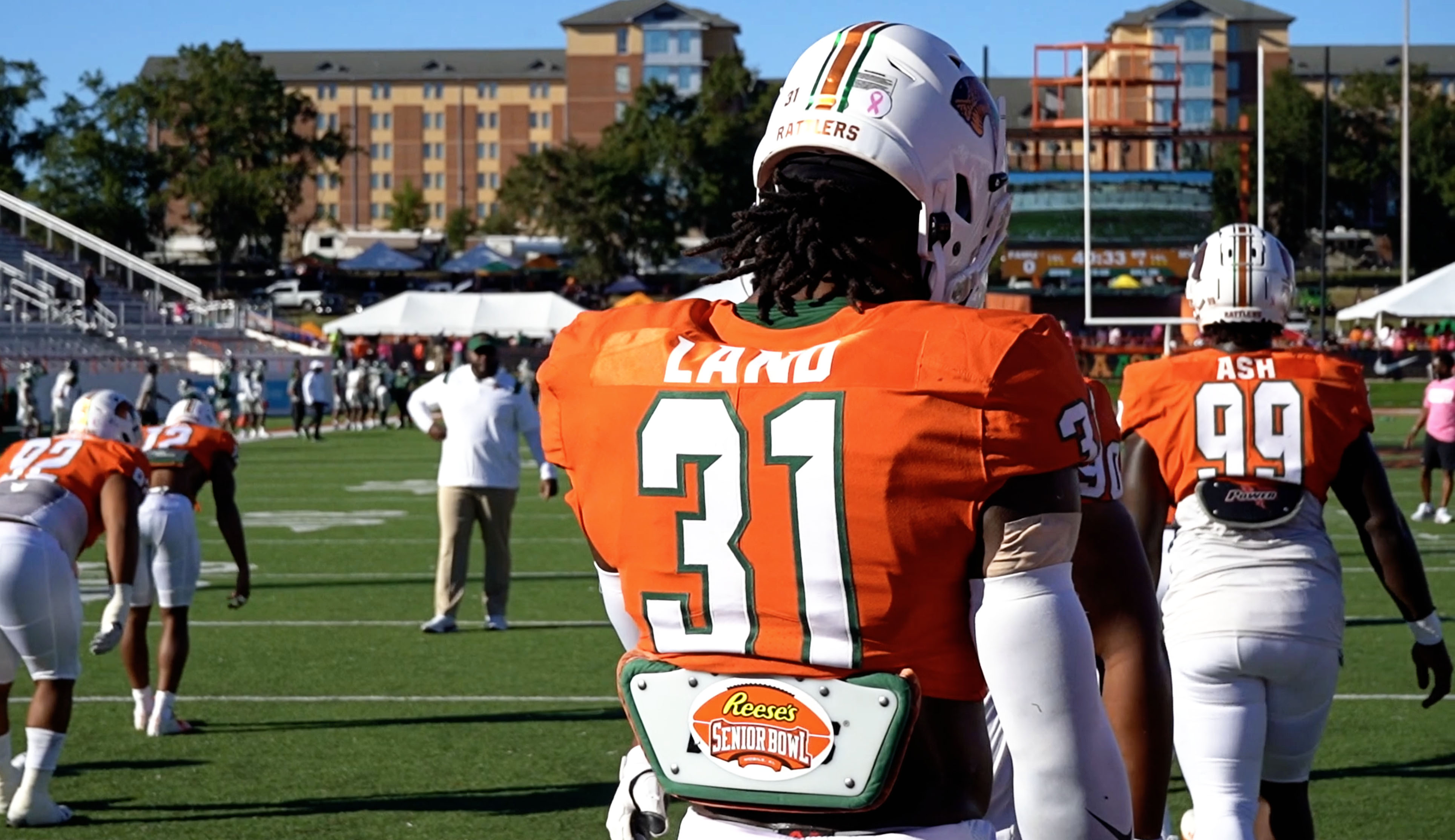 This invitation is an opportunity for Land to spend valuable time with NFL coaches and scouts.

The Senior Bowl was a goal for Isaiah Land once he decided to withdraw from his brief exploration of the transfer portal.  As motivation, he has worn the sticker of the Reese’s Senior Bowl on his lower back shoulder pad guard all season.  Land received the elaborate package sent to invitees on Wednesday, Nov. 9 and is ready to perform in front of NFL coaches who will host the event at the conclusion of his season.

“It feels good. I feel like I just put the work in for it and it feels good that I stayed put at FAMU and reaped the benefits of my labor,” said Land.  “I am just happy it all worked out.”

From the offseason to the beginning of the year, the 2021 Buck Buchanan winner had anything but an easy journey.  Disappointment in the 2021 NFL Draft prompted Land on the last day of eligibility to enter the transfer portal. He described the experience as utter chaos.

“There were teams all over me like I was the best thing out there, but in sitting back, I asked myself where were these teams when I was coming out of high school,” Land said.

“FAMU was the only school that took a chance on me and though I was disappointed that the HBCU players didn’t get taken where I thought they should, home for me was at FAMU.  I owed it to the school and to my brothers who had grinded the way we did together, to come back and make the best of my final year at FAMU.”

Land was hearing from scouts and professionals that his draft stock might hinge on his success in the FAMU vs UNC game.  Unfortunate staffing issues had FAMU’s compliance and academics staff short-handed, leading to 26 uncertified player. Land was one of them.  It was a big blow to his thoughts on his decision to come back to FAMU.  Just 24 hours prior to the next week’s game against Jackson State, Land was cleared to play, but without the reps along the way, he would get dehydrated early in the contest and not return.

Slowly this season, he has returned to form.  Additionally, he isn’t a secret anymore.  Teams now shade his way and straight double-team him on every down.  Still he has fought through to wreak havoc in the backfield of SWAC opponents, fueling the Rattlers’ seven-game winning streak.

Since early in the season when he was placed on the “Reese’s Senior Bowl Watch List” he has worn a sticker on his back plate.     “When I was put on the watch list this year at the beginning of the season, they sent me a letter and a sticker,” Land said.   “I put the sticker on my back plate as daily motivation that I had indeed made the right decision to return to FAMU and it was on me to show the caliber of player I am.”

The draft starts in Mobile

The Reese’s Senior Bowl will be played in Mobile, Ala. and will be coached by NFL coaches.  It is the supreme opportunity for Isaiah Land to showcase his skills, physique and football IQ to those directly involved in evaluating personnel for the NFL Draft.  The invitation is a beacon for Land.

“It gave me a boost of confidence and a breath of fresh air.  I don’t have the same stats as last year but I’ve been playing good ball.  This invitation takes some weight off me in thinking about what comes after my last game.,” Land said.

325
The Latest in HBCU Sports and Culture