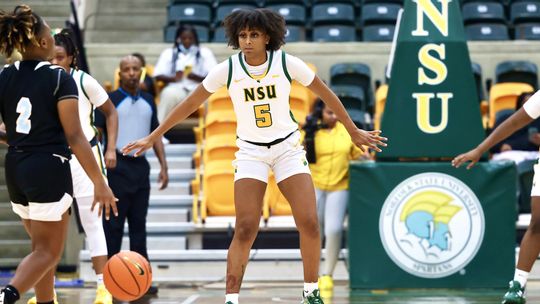 The Norfolk State women feasted on Virginia-Lynchburg, recording a triple-digit margin of victory over the non-NCAA HBCU squad.

It only took a couple of hours for the Spartans to hurdle past a few more barriers, breaking multiple records in a 125-19 blowout over Virginia University of Lynchburg.

The 106-point differential was the largest margin of victory in program history, and tied for the fewest points allowed in a game. Norfolk State’s 53 made field goals and 68 rebounds were each the second most by any Spartan team in a single game.

Camille Downs got the season off to a spectacular start, hitting a three-pointer before swiping a steal for an easy fast-break layup within the game’s first minute. The reigning MEAC Defensive Player of the Year finished the night with 14 points and four steals.

Francis and Downs accounted for 19 of the team’s first 25 points, with Wheeler and Swift knocking down close-range shots before the end of the quarter. The baskets put Norfolk State ahead 29-4 at the end of the first quarter, setting up for a nearly flawless second period.

Da’naijah Williams, who shot 7-of-11 from the field for 16 points and four rebounds, started off the quarter with an offensive rebound and layup. Niya Fields got in on the action a few minutes later on a three-point swish as the Spartans went on to outscore VUL 23-0 in the second quarter.

Makoye Diawara added four of her 12 points within the first 90 seconds of the second half, with Fields knocking down her second deep ball shortly after. Crystal White made one from beyond the arc soon as well, converting on both of her 3-point attempts for the night.

The three-point barrage continued for the rest of the third quarter. After Da’naijah Williams hit back-to-back jumpers, Wheeler proved she could score from both inside and out of the paint, drilling a three-pointer to give the Spartans an 81-point advantage heading into the final period.

Swift continued her strong Norfolk State debut in the fourth quarter, finishing with 13 points and six assists. After redshirting her freshman season, Tamiya Santos notched her first collegiate points on a fastbreak layup in the closing minutes.

Norfolk State has little time to celebrate their comfortable victory, heading to University Park, Pa. on Wednesday for a meeting with Penn State. The first-ever meeting between the Spartans and Nittany Lions tips off at 7 p.m. and can be viewed live on Big Ten Plus.