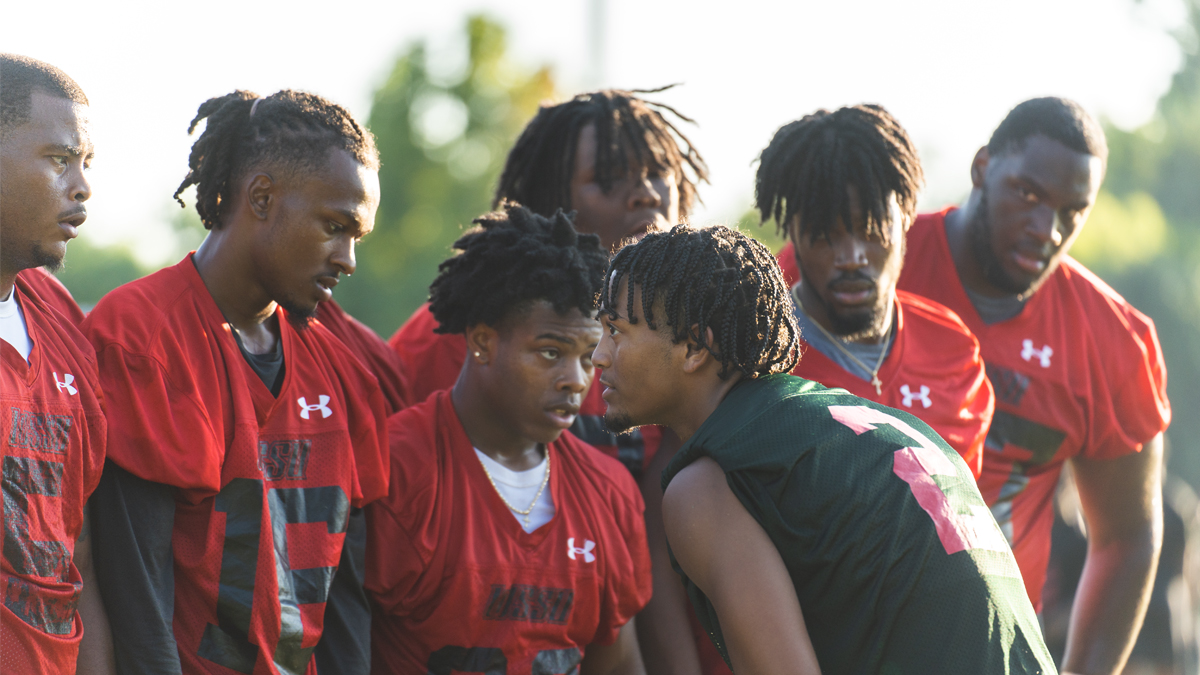 Bryce Jackson knew he wanted to attend an HBCU. The atmosphere at a WSSU basketball game helped make his decision easier.

Bryce Jackson is the fourth quarterback to start a game for Winston-Salem State this football season. But he just might be the last.

The 6’0 freshman from Winterville, NC had a big game against Saint Augustine’s on Saturday. He completed 11 of 14 pass attempts for 228 yards and three touchdowns in the 41-14 win. Those might not sound like groundbreaking numbers in 2022 football, but when you consider that WSSU had passed for just 504 yards and four touchdowns heading into that game, it was a watershed moment.

WSSU head coach Robert Massey was most excited about a number that showed zero on the stat sheet — turnovers. But he sees plenty to like in his freshman quarterback, who is now 2-0 as a starter.

“Bryce is a ball of excitement. You have to calm Bryce down before the game,” Massey said at Tuesday’s media availability. “Even the Livingstone game, he had a full body cramp. He’s so excited. He has a strong arm. So that doesn’t allow defenses to sit on the route. It keeps folks honest and again we’ve always talked about our talent outside. So Bryce has done a great job of getting the ball to those guys.”

In a roundabout way, Winston-Salem State basketball helped WSSU secure what could become its quarterback of the present and the future. WSSU offensive coordinator and quarterbacks coach Kam Smith offered the former D.H. Conley quarterback last December. He knew he wanted to attend an HBCU all along, and he says a trip to a basketball rivalry game helped tip the scales.

“Coach Smith got in contact with me and, we were talking back and forth through the offseason. Telling me things I need to work on going into college and then I had my visit here,” Jackson remembers. “And that was the Livingstone basketball game. So I felt like home there and everything, so I really liked it from the start.”

Jackson was on the outside looking in when camp started, with veterans Dominique Graves and Richard Latimer battling it out for the starting spot while Jackson and fellow freshmen Jahmier Slide were hoping for their shot. A season-ending injury to Graves in the opener and Lattimer’s struggles opened the door for the youngsters to get their shot. Slade got the starting nod first, and Jackson worked his way into the lineup in the Livingstone game.

“It’s just been a lot of hard work,” Jackson said of his rise to becoming the Rams’ starter. “I  just put my nose down and really just trying to  learn what I have to learn to put myself on the field and give myself the opportunity to show what I can do.”

Jackson has the confidence of graduate offensive lineman Jalen Dickerson, who likes what he sees from the freshman.

“I feel like he’s finally starting to mold and understand and adjust to what college football is like and learning as a quarterback that you are a leader —  even though it might not be given to you. You have to work for it,” Dickerson said. “But you are seen as a leader of the offense.”

“Seeing everybody come out, seeing some of my friends and my family in the stands, playing in front of them again, that was good,” Jackson said of his first home game at WSSU. “And getting back there in the future — this Saturday and next Saturday —  we’re excited and hope to do the same thing.”

327
The Latest in HBCU Sports and Culture