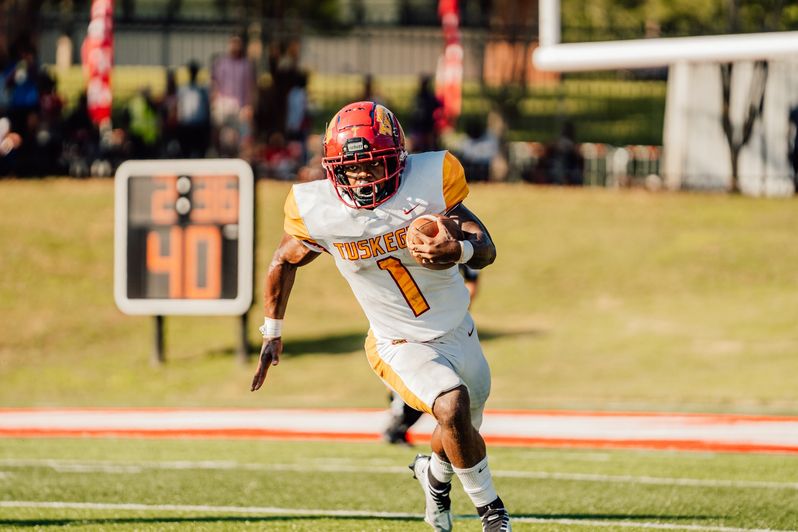 ATLANTA, Ga. – Tuskegee (3-2, 2-0 SIAC) etched out a 45-43 win in double overtime against Clark Atlanta in SIAC action on Saturday afternoon inside Panther Stadium.

The Golden Tigers earned the emotional win to extend their current win streak to three games with a two-point conversion ran in by Bryson Williams(Lithonia, Ga.) in the second overtime, after a crucial stop by the Tuskegee defense on a two-point play on the previous drive for Clark Atlanta.

The Golden Tigers started fast once again, receiving the opening kickoff, and scoring with a seven-play drive, capped by a 10-yard rush from quarterback Malik Davis (Apopka, Fla.), who started the game after finishing the matchup last week.

Both teams traded field goals on their next possessions, ending the first with a score of 10-3, before a touchdown pass for Clark Atlanta pulled the game within a single point. Arnes Huskic(Jacksonville, Fla.) added another field goal for Tuskegee on their final drive right before the half, giving the Golden Tigers a 13-9 lead heading into the break.

Clark Atlanta opened the second half with a pair of touchdowns, the first from a four-yard rush, while the second came off a Golden Tigers fumble, giving the Panthers a 23-13 early in the second half. Tuskegee responded to pull within three after Taurean Taylor(Stockdale, Ga.) scored on a 23-yard scamper, part of a career-high 218 yards on the ground for the senior to make the score 23-20.

After the two programs traded touchdowns early in the fourth, for a 30-27 lead for Clark Atlanta, a score that would remain until the final drive for Tuskegee in regulation. With just over three minutes to go, Davis helped lead another scoring drive, this time concluded with a game-tying field goal from Huskic to send the game into overtime.

Tuskegee scored first in the overtime period on a connection from Davis to Jordan Ogletree(LaGrange, Ga.), however the Panthers responded with their own score to send the game to a second overtime. Clark Atlanta punched in a three-yard touchdown rush to take a 43-37 lead yet failed the conversion before. Davis led another scoring drive, this time ending with a pass to freshman Corey Petty (Warner Robins, Ga.) on the score, followed by the conversion from Williams to secure the win.

Up Next
Tuskegee will continue conference play next weekend for the 86th Morehouse-Tuskegee Classic inside Legion Field in Birmingham. Kickoff for the matchup is set for 7 p.m.