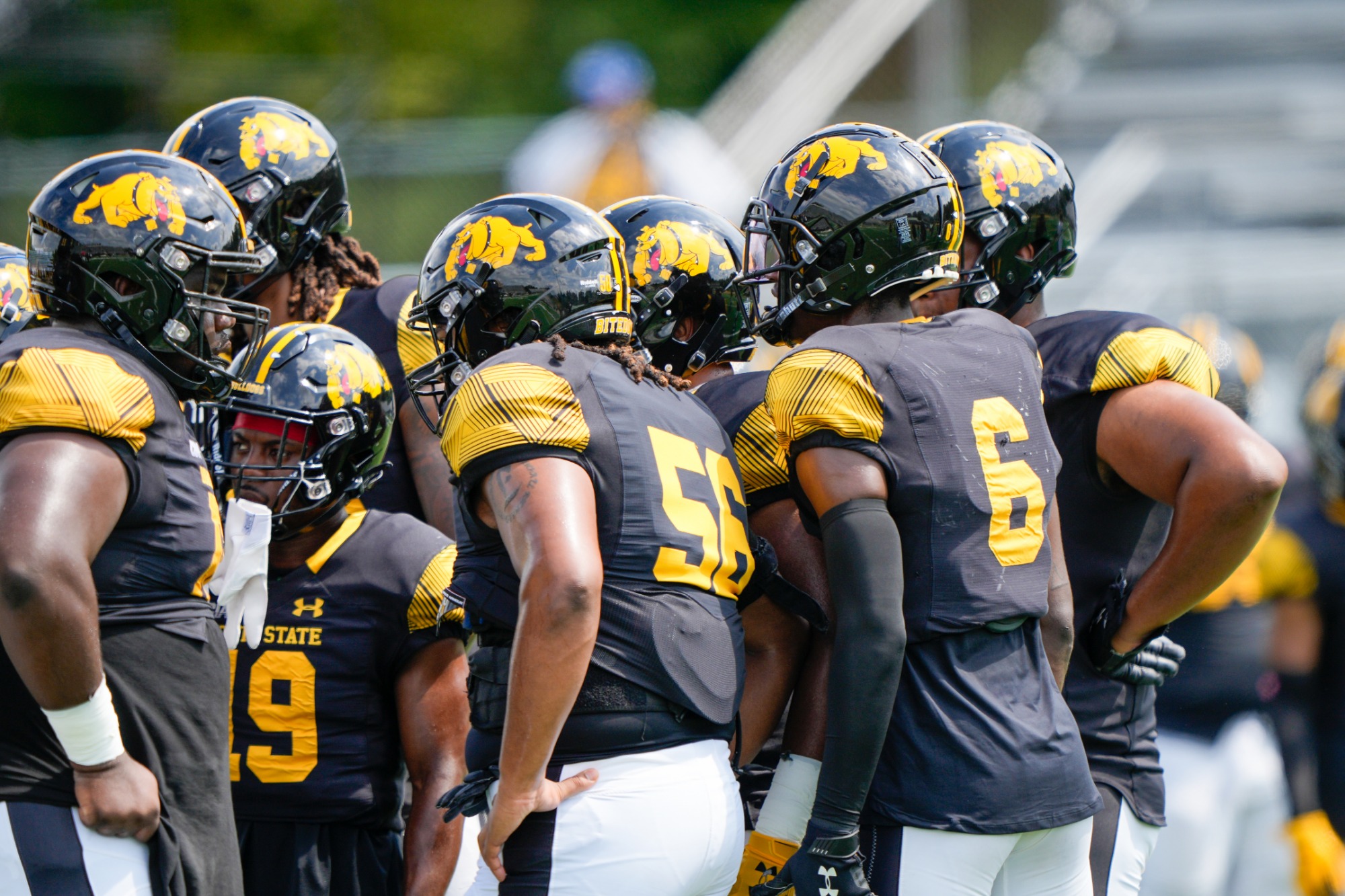 Bowie State looks to get above .500 as it hosts an opportunistic Livingstone College program for its homecoming 2022.

BOWIE, Md. – Bowie State football is set to host Livingstone College this Saturday, Oct. 1 at 2 p.m. for its homecoming game. The contest will mark the Central Intercollegiate Athletic Association (CIAA) cross division finale for both teams. Kickoff is slated for 2 p.m. at Bulldog Stadium.

Saturday’s game marks the 32nd meeting between the two teams. Livingstone owns an 18-13 all-time record against Bowie State dating back to 1973. The Bulldogs are 9-8 at home against the Blue Bears entering Saturday’s game. The last meeting between the two teams, Bowie State blanked LC for a 49-0 win during the last meeting held on Sept. 25, 2021 in Salisbury, N.C.

Bowie State has won seven of the last 10 matches, including a two-game win streak entering Saturday’s game. The longest win-streak against LC was three-straight back in 2008-2011. The Blue Bears last victory against the Bulldogs came in 2014 (36-33) in Salisbury, NC.

Bowie State (2-2, 1-1 CIAA) was able to erase a first half scare to defeat the Falcons of Saint Augustine’s, 36-20 at the George Williams Athletic Complex. The win snapped a two-game losing skid. The Bulldogs turned in season-high 503-yards of total offense that featured 251 through the air and a season-high 252 on the ground. For the first time this season, the Bulldogs went 4-for-4 in point after touchdown attempts and tallied three interceptions for 61-yards and a TD.

Redshirt sophomore Corey Johnson (Upper Marlboro, MD) rushed for a season-high 117-yards on 16 carries and a TD – the best for a Bulldog running back this season highlighted by a 70-yard rush in the fourth quarter. Graduate senior Dion Golatt, Jr. (Largo, MD) threw nine completions on 16 attempts for 130-yards to go along with two rushes for 30-yards and a rushing TD – his first of the season.

Bowie State averages 22.3 points per game (3rd in CIAA) after four games while their opponents post 24.3 points (8th CIAA). Golatt has completed 76 passes for 945 yards, six TDs and four interceptions, which all rank second in the CIAA. Samuel Doku (Silver Springs, MD) leads the run game unit for Bowie State as he ranks sixth in the CIAA with 51 carries for 222 yards and two TDs.

Bowie State ranks third in the CIAA in offense having combined for 89 points including 12 TDs and now two field goals through four games this season. Notably the run game for BSU has struggled this season but against the Falcons last week the Bulldogs rushed for a season-high 252-yards 46 times and scored two rushing TDs in the contest. That game alone moved Bowie State up in the CIAA rankings for total rushing yards (532) from 10th to sixth. However, the Bulldogs have been quite the passing team this season, ranking second with 1,068 receiving yards (267.0) and six touchdowns.

Defensively, the Bulldogs rank fourth amongst the CIAA in points allowed by an opponent at 24.3 points. The rushing defense has allowed 462 yards through after four games (4th in CIAA) and 644-yards passing (4th in the CIAA) as the Bulldogs have allowed six touchdowns (5th in CIAA).

Bowie State fell out of the American Football Coaches Association (AFCA) DII National rankings and the D2Football.com Top-25 list with the loss to Shaw in Week 3. Since, the Bulldogs remained ranked in the BOXTOROW Media Poll, HBCU DII Coaches Poll and HBCU GameDay’s DII Football Poll. This week, the Bulldogs moved up a spot in both the DII Coaches and Media Poll at No. 6 and No. 9 while in the HBCU Gameday DII Football Poll, Bowie State was No. 6 (week 4).

LC is 1-3 and 0-2 in the CIAA entering Saturday’s game. The Blue Bears suffered a 37-7 loss to Virginia State last outing and have not loss two-straight. LC trailed 16-0 at the half and scored their lone touchdown in the fourth on a 3-yard reception for Matthew Henry however, the Trojans were already up 37-0 when the Blue Bears scored with 3:47 left in the contest.

LC ranks 10th in offense, averaging 11.3 points per game amongst the CIAA while on defense they are ninth allowing 30.8 points from its opponents. The Blue Bears have scored just eight TDs through four games (12th in CIAA) and ranks last in the league in rushing (29.0), rushing defense (227.0) but they defend the pass game fairly well, currently atop in the CIAA allowing just 108.8 yards per outing.

Silas Cruse has the most yards at the QB position (472-yards) on 47 completions, four TDs and three interceptions. Tutson has a team-high 16 carries (55-yards) while Lasirton Bryant has 185 receiving yards (19 catches) and two TDs. Defensively, Jaden Echols has collected 27 tackles, followed by Will Tims (19) and Mekhi Dunlap (17) round out the top tacklers for the Blue Bears.

Bowie State will head to division foe Virginia State for a televised game at 4 p.m. from Rogers Stadium in Ettrick, Va. Fans unable to make the game can catch all the action live on the CIAA Sports Network.