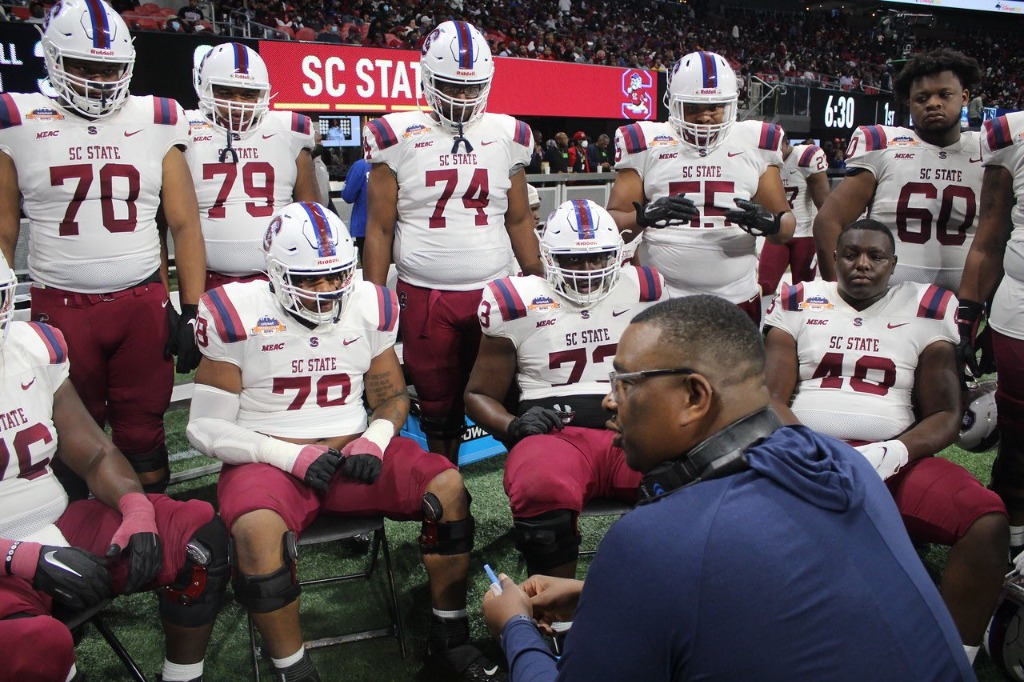 Before Hurricane Ian posed a threat to the Southeast, SC State Coach Buddy Pough had enough of a challenge in getting ready to face South Carolina. But the storm forced officials to move the game from Saturday to Thursday, and someone asked if the short week would help him and possibly hurt the Gamecocks.

“The last time we played a Division One (team), we played UCF. We had plenty of days to prepare. That didn’t help.” says Pough, referring to a 56-10 loss his Bulldogs (1-2) suffered against Central Florida on Sept. 1 in the season opener for both schools.

Pough, speaking on Monday during the Mid-Eastern Athletic Conference coaches’ call, is looking for his team to rebound after losing to North Carolina A&T last weekend. But the road, quite literally, doesn’t get any easier as SC State plays its fourth successive game away from Orangeburg, but in this instance just about 45 miles away in Columbia. On top of that, the coach says South Carolina has the ingredients to be one of the premier programs in the country.

“They had lost the game to University of Georgia a couple of weeks back but they beat up on Charlotte this past Saturday,” he says. “So you know, we get a chance to get in there, have our shot at them … ”

HISTORY SUGGESTS BULLDOGS HAVE A CHANCE

Charlotte took its shot and had the Gamecocks (2-2) on their heels for a half. The 49ers, who led early, trailed 20-14 at halftime before South Carolina gathered itself, scored 22 points in the third quarter, and rolled to a 56-20 victory.

Georgia State took a third-quarter lead against South Carolina before losing, so between those two games, Pough sees a glimmer of hope.

“We try to use that as information that could be a resource for us being able to do similar kinds of things,” he says. “But, it’s all about staying in the moment. You’ve got to continue to hang in a game, and the longer you hang, the better off you feel.”

SC State didn’t fare as well in its trip to North Carolina A&T, although it followed a course similar to the one Charlotte took. The Bulldogs led 13-7 early in the second quarter and trailed by just 17-13 at the half. The Aggies roared ahead with a 21-point third quarter and took a 41-27 win.

The Bulldogs could take heart in performances from redshirt junior Shaquan Davis, he caught six passes for 127 yards and a touchdown. The teammate who connected with him, Corey Fields Jr., hit 26 of 49 passes for 316 yards and a career-high four touchdowns.

“He’s you’re all-around, top notch quarterback for our level. We liked the way that he held himself the way he leads our team, the way he generally does things,” Pough says. “So, we need him to play at that level of high from this point on.”

Pough was without running backs Kendrell Flowers and Alex James, who he says were shaken up from the loss to Bethune-Cookman. Their absence may have been a factor in the Bulldogs running for only 12 yards on 22 tries. The coach also says one of his starting offensive linemen was missing.

BENEFIT FOR THE BULLDOGS

There’s one benefit to SC State playing the Gamecocks, and that’s the chance for his players to bask in the spotlight of playing a Power 5 team and possibly impressing some National Football League scouts.

“So, if you’re going to have a chance to play on the next level, then these are the guys that you’re going to be playing against,” Pough says. “So, they want to make sure that you can fit against those guys. So, it gives us a chance to show that we belong.”