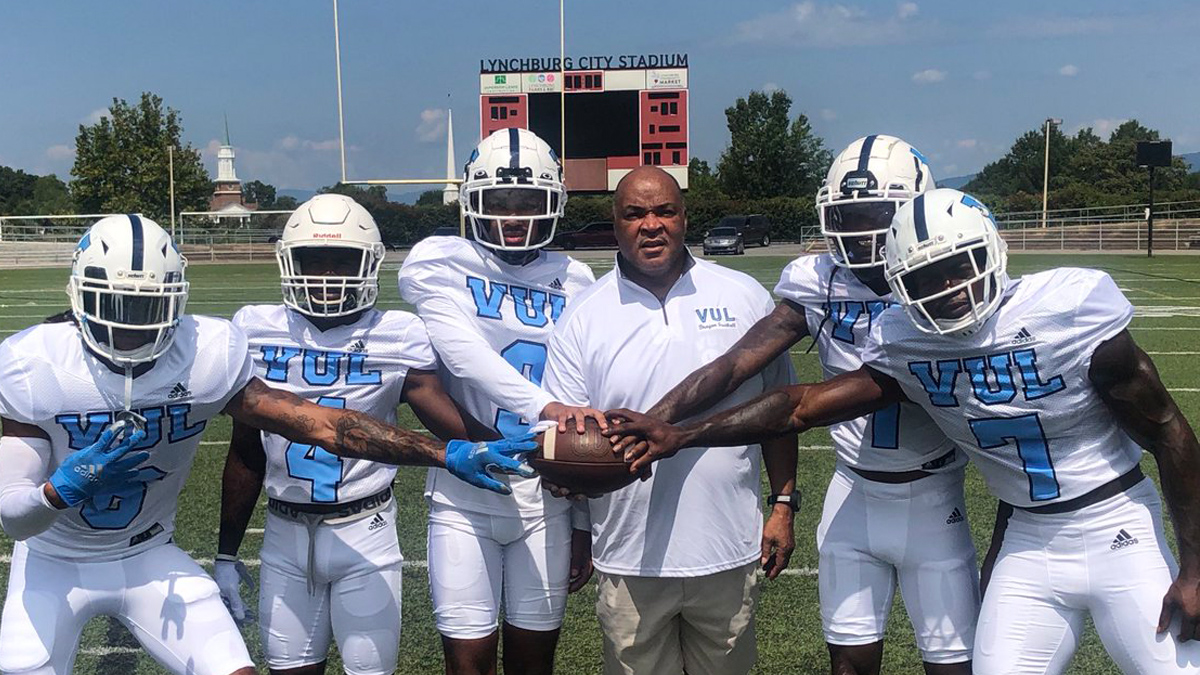 Week after week, season after season, the mystic Dragons of VUL travel from the hills of Virginia to take on all-comers.

The optimism is obvious when Tim Newman speaks about the future of football at Virginia University of Lynchburg — better known as VUL — an attitude he exudes in the face of a schedule that includes a lot of bus rides and which opened with a huge defeat.

“Our football team is young, still growing,” Newman says. “Got a great coaching staff and we’re trying to put this thing together up here.”

Newman says it was about a decade ago that VUL decided to restore its football program, and he’s the coach who was chosen last year to continue the mission. He says when he was hired in April 2021, he had little opportunity to recruit players. Now, he considers this his first full year.

“I’m just super excited about the future here. This gives me a chance to come in and build this thing,” Newman says. “Got a chance to play one recruiting class and this year, we’re getting where we need to get.”

The 2022 football team is a work in progress, and with that, VUL is paying a significant price to compete with an eye on improvement. It’s playing nine road games, and after NC Central on Saturday, there are contests upcoming against HBCU programs SC State, Southern University and Morgan State, as well as The Citadel. Of course, those games against Division I opponents mean guaranteed checks which help keep the program going.

“We’re road warriors,” says Newman, who is also the school’s athletic director. “We’ll play anybody in the country, anywhere, anytime. We’re not afraid of anybody.”

THE HISTORY OF VIRGINIA UNIVERSITY AT LYNCHBURG

In 1886, the Virginia Baptist State Convention founded the Lynchburg Baptist Seminary in the hills of the town as an institution of “self-reliance,” “racial pride,” and “faith,” according to the school’s website. It first offered classes in 1890 as the renamed Virginia Seminary. Under the direction of Gregory Willis Hayes, the second president of the college who served from 1891 to 1906, the school became a pioneer in the field of African American Education.

VUL comes under the umbrella of the National Christian College Athletic Association, a group of 90 schools with headquarters in Greenville, South Carolina. Established in 1968, the NCCAA “uses intercollegiate athletics to further the Great Commission and is committed to equipping student-athletes and coaches to make a positive impact for Christ,” according to a description on its webpage.

The association is focused on what it calls “King Chasing,” which it says uses the four values of the Game Plan 4 LIFE — Love, Integrity, Faith, and Excellence — to make collegiate athletics about more than winning championships. The mission of the #KingChasing program, it says, “is to keep Christ at the center of the student-athlete experience.”

As far as HBCU football goes, VUL once competed in the Central Intercollegiate Athletic Association from 1921–22 to 1953–54. Their presence in the conference was noted in a column from The Pittsburgh Courier in 1952.

“Be it remembered that the CIAA itself was set forth by the action of Bible colleges: Virginia Union, Lincoln University, Virginia Seminary, Hampton Institute, Shaw University and Howard University,” according to the column.

Now, VUL is currently listed among eight independent schools in the NCCAA.

GETTING THE TEAM’S WORD OUT

Learning about VUL’s current football program is a little more challenging because the website is being renovated and the 2022 schedule and the scores from its three games thus far constitute the extent of the information provided. The school doesn’t have a sports information director to disseminate and distribute team information.

Lacking adequate in-house devices to provide information means finding the latest on the Dragons is left to the NCCAA, and that’s where the early exploits of freshman quarterback C.J. Brooks are found. He is the sixth most efficient passer in the association with a rating of 119.4. He has completed 48 of 96 passes for 675 yards and three touchdowns.

“He’s young. He’s growing every week,” Newman says. “He’s going to get better and better every week. But that’s the type of kid we want to try to bring in, and he was the one we wanted.

“He’s a Division One quarterback, no question about it. And I think by the time he’s a senior, I think the country is going to take note who he really is,” the coach says.

Brooks, who’s from Orlando, Florida, has thrown to 12 different receivers already this season. Among them, Dominic Perks has caught 14 passes for 292 yards, including a 90-yard play for a score in the loss to Delaware State. Cincere Clark has caught 13 passes for 180 yards and has yet to score. Newman considers them Division One-type athletes as well.

“I think one of the finest receiver corps in the country. I really feel that way,” Newman says.

The season opened with a 77-point beatdown by Virginia Union, but the Dragons made a game out of the next contest, falling 21-13 to Presbyterian after leading 7-0 in the first quarter. VUL held two leads against Delaware State before falling, 35-19.

MEAC football coaches have certainly taken note. The program has found itself as a space-filler in the Division I conference that is now down to six football programs. It will play four of them in 2022. DSU was first on the itinerary, and VUL acquitted itself much better than the 55-6 showing in 2021.

“Lynchburg is a better football program than they were a year ago,” Delaware State coach Rod Milstead says.

Durham is next as VUL will travel to take on a surging NC Central squad.

“That’s not the same Virginia Lynchburg that I saw years back when we played them,” NC Central Trei Oliver coach says.

Oliver is wary, and Newman suggests that he should expect the Dragons to provide a challenge for the Eagles.

“We’re gonna go in there, we have nothing to lose and everything to gain,” Newman says. “One thing about our football team, we play hard. Every week we play hard … I mean, it’s a blessing for us to get this opportunity to play.”