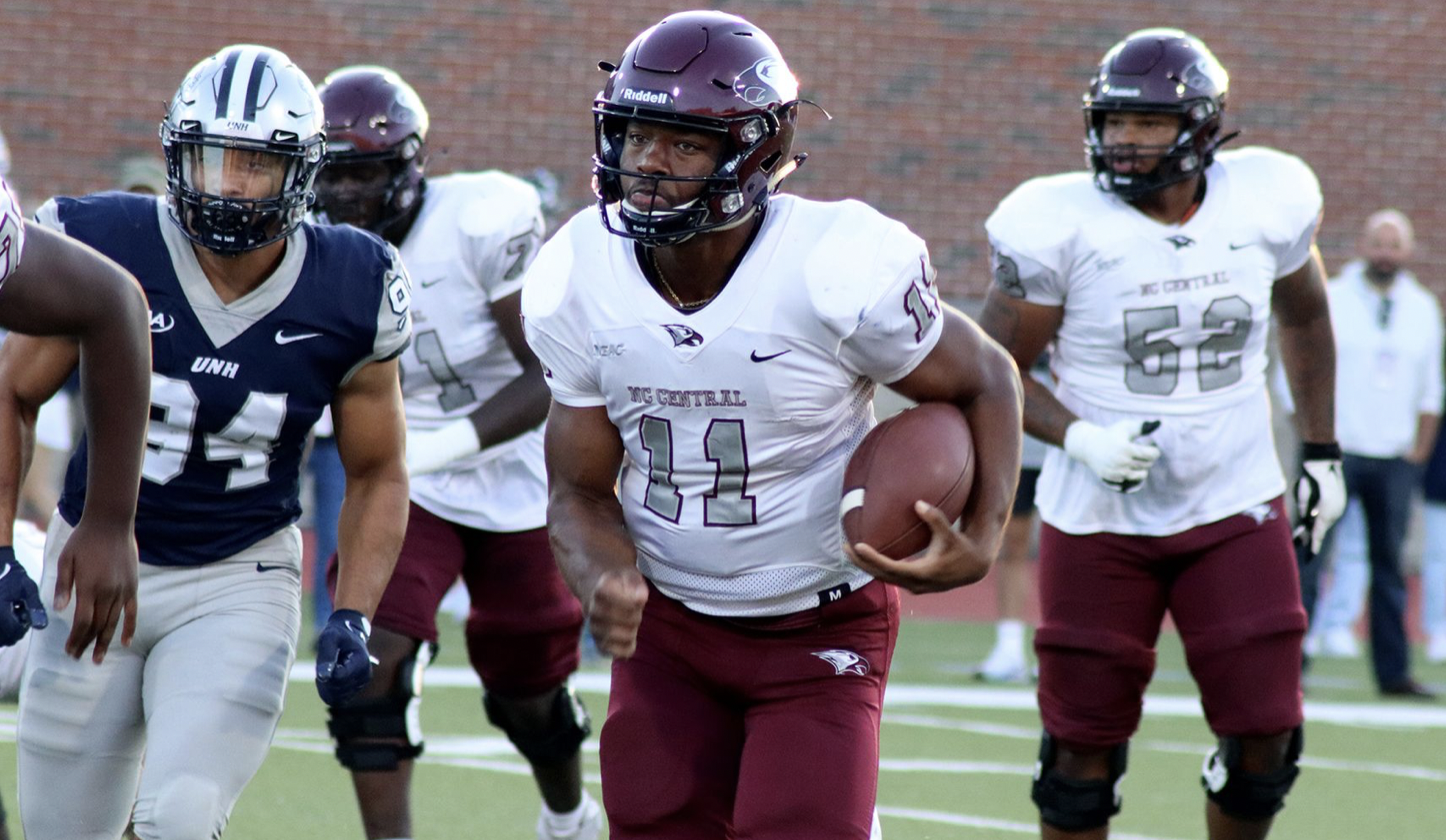 NC Central is undefeated and unsurprised about it

WINSTON-SALEM, N.C. — Trei Oliver would prefer to use Davius Richard’s arm to lead his offense, but the NC Central coach needed his quarterback to use his legs as well to help lead the Eagles past New Hampshire on Saturday.

“I don’t really like running because he’s so valuable, and we have a great stable of running backs,” Oliver said during the Mid-Eastern Athletic Conference coaches call on Monday. “But I think the game plan we had, we could get some numbers running our quarterback and they didn’t really adjust to it.”

Richard passed for 194 yards and two touchdowns, and he added 140 yards rushing and another score on 16 carries in the 45-27 victory which boosted NC Central to a 3-0 start and handed the Wildcats their first loss after winning their first two games of the season.

Oliver said the Eagles were getting the most out of what the New Hampshire defense allowed them, and that opened up the air and ground for Richard.

“So we just kept taking what was there and open. And he had a big day on the ground running the football,” Oliver says. “He was hitting his targets throwing the ball as well. But we don’t want to run him too much because Mookie Collier and J’Mari Taylor did an outstanding job carrying the load.”

Taylor and Collier ran for a combined 77 yards. Richard said he didn’t expect to run as much as he did, but New Hampshire literally offered him the path to his performance.

“Personally, I didn’t think it was going to be called that many times. It was going to be like one or two times,” Richard said. “But every time we lined up in it, they gave us what we wanted, so I guess that’s the reason they kept calling me.”

Returning to Durham, the Eagles face Virginia University of Lynchburg, which dropped a 35-19 decision to Delaware State, leaving them winless after three games. The record doesn’t faze Oliver, however.

“They are very good at the skill position. Their receivers, I think, are better than New Hampshire’s receivers,” Oliver says.

CJ Brooks completed 19 of 33 passes for 341 yards on 19-of-33 and two touchdowns for the Dragons. Donmonic Perks had four catches for 143 yards, including a 90-yarder. On the down side, Virginia-Lynchburg had 21 carries for -21 yards. That makes the defensive focus clear for the Eagles.

“The quarterback is athletic and he can keep extending plays with his legs,” Oliver says. “So, we’re going to have to do a great job of containing him in the pocket … playing with our discipline to stay on top of these receivers.”

NC Central is undefeated and unsurprised about it