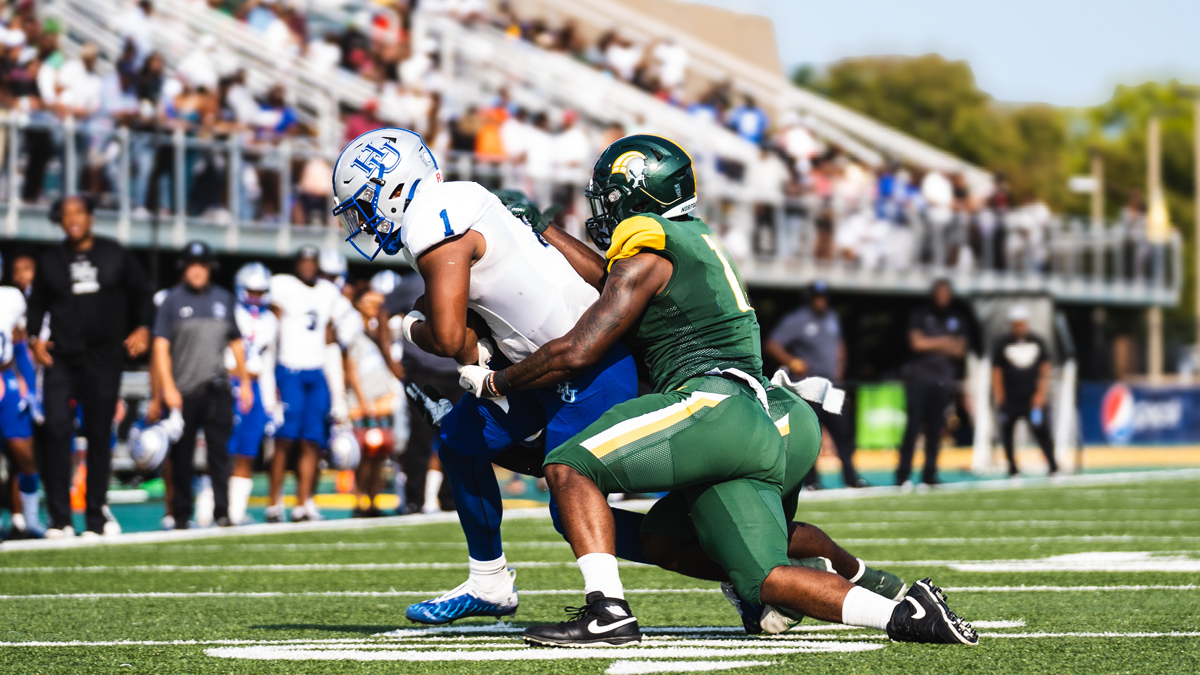 Shaw handed three-time defending champion Bowie State its first loss in CIAA play in 19 games. The Bears were one of several teams – Texas Southern, Howard, Elizabeth City State – to pick up their first win in Week Three. Get all the scores, top performances, standings etc. in this week’s Roundup.

In its home opener, Jackson State broke from a 21-17 halftime lead to score 45 unanswered second-half points in downing Grambling State, 66-17.

Running back Maurice Washington had a 73-yard TD run and GSU (1-2) got a 17-yard fumble return TD to keep the game close in the first half.

• NC CENTRAL MOVES TO 3-0 WITH ROAD WIN AT NEW HAMPSHIRE!

Quarterback Davius Richard ran for 140 yards and a TD and threw (18–27-0) for 194 yards and two scores as NC Central moved to 3-0 on the young season going on the road to knock nationally-ranked New Hampshire (2-1) from the unbeaten ranks, 45-27. UNH was ranked 25th in the STATS FCS poll.

NCCU held UNH to 65 rushing yards and got an early 33-yard interception return for a score from Khalil Baker, his third pick of the season.

• FORT VALLEY AT 3-0 AFTER SQUEAKER OVER ALLEN!

Fort Valley State got 334 passing yards and three TDs from redshirt freshman QB Kelvin Durham (20-32-0)who also scored the game-winner on a 10-yard TD run late in the fourth quarter in a 29-27 win over Allen (0-2).

The Wildcats are 3-0 under first-year head coach Shawn Gibbs. It’s the first time FVSU has been 3-0 since 2004.

Durham hit Fralon Warren on a 49-yard scoring strike to pull the Wildcats within 27-23. His 10-yard game-winning TD came at the end of a 12-play, 66-yard drive.

Sophomore running back Jada Byers backed up his 313-yard effort in a win over nationally-ranked Valdosta State last week with a 199-yard, 2-touchdown output as Virginia Union moved to 3-0 with a 42-6 win at home over Livingstone (1-2).

Byers had 26 carries and ran for 5- and 11-yard TDs. He led a ground attack that wracked up 352 yards on 52 carries and scored five touchdowns. Byers is averaging 8.4 yards per carry.

In a game with no individual or team stats published yet, Hampton prevailed in the Battle of the Bay at Norfolk State, 17-7.

The Pirates (3-0) got two TDs via the pass, a 23-yarder from Malcolm Mays to Jadakis Bonds in the first quarter and a 75-yarder from Christopher Zellous to Romon Copeland in the third quarter. The only NSU TD came on an 11-yard pass from QB Otto Kuhns to DaQuan Felton. Hampton added a 24-yard Axel Perez field goal in the fourth quarter.

Langston QB Larry Harrington threw for season highs of 420 yards and six TDs in a 56-24 win over Wayland Baptist Saturday.

Benedict broke from a scoreless first half Thursday evening, outscoring Savannah State 24-6 in the second half to improve to 3-0. It is the best start for the Tigers and second-year head coach Chennis Berry since resuming their football program in 1995.

Noah Zaire Scotland rushed for 122 yards and a TD while Benedict quarterbacks Eric Phoenix (10 of 14) and John Lampley (4 of 6) completed 14 passes to 12 different receivers including one score as the Tigers pulled away.

Shaw scored on a 2-yard run by Sidney Gibbs with :36 seconds left to hand three-time defending CIAA champ Bowie State its first loss in conference play in 19 games, 17-14. The Bulldogs start the 2022 season 1-2 overall for the first time since 2016.

Shaw’s winning drive began at the BSU 44. Gibbs’ score came on the sixth play of the drive.

Texas Southern got its second straight win over Southern and first win this season as the Tigers shut out the Jags 24-0 in Arlington, Texas. TSU beat Southern 35-31 a year ago.

• HOWARD RIDES STRONG SECOND HALF TO SHUTOUT WIN OVER MOREHOUSE!

After a scoreless first half, Howard scored 31-second half points in posting a 31-0 shutout of Morehouse before a crowd of 35,042 at the New York City HBCU Football Classic at MetLife Stadium in East Rutherford, New Jersey.

Others getting first wins

• ELIZABETH CITY STATE GETS BY WSSU!

ECSU recovered the onsides kicks and gave the ball back to WSSU with just :14 seconds left.

Alcorn State became the first Southwestern Athletic Conference (SWAC) school in history to defeat McNeese State in football on Saturday evening, as the Braves erased the league’s 15-game losing skid to the Cowboys courtesy of a 30-19 victory at Cowboy Stadium in Lake Charles, Louisiana.

The Braves (1-2) scored 21 second-quarter points as Nico Duffy scored on a 13-yard run, Jarveion Howard went in from 11 yards out and Monterio Hunt caught an 89-yard TD pass from Aaron Allen (15-27-0, 189 yards). McNeese pulled to within 24-17 after a late third-quarter score. Alcorn added 38- and 21-yard Noah Kiani field goals in the fourth quarter to secure the victory.

Morgan State got the first win of the Damon Wilson era as it defeated Sacred Heart 24-9 in Baltimore Saturday.

The Bears (1-2) ground out 154 rushing yards and got two rushing touchdowns in the third quarter, one from Jabriel Johnson on a 4-yard run at the end of a six-play, 87-yard drive. Alonzo Graham capped a 7-play, 54-yard drive with a 12-yard run with 4:40 left in the period.

Avery Jones hauled in a 12-yard pass from Duce Taylor in the second quarter after Beckett Leary hit a 20-yard first quarter field goal. The Bears led 10-2 at the half.

There were seven quarterbacks who topped the 300-yard passing mark this week and one – Langston senior Larry Harrington – went over 400 yards. Harrington also led the passing parade as he threw for six touchdowns in a 56-24 win over Wayland Baptist.

Virginia Union sophomore Jada Byers led all HBCU rushers again this week. The 5-7, 180-pounder rambled for 199 yards on 26 carries in the Panthers’ 42-6 win over Livingstone. Byers was one of four runners to score two TDs this week.

Elizabeth City’s Juanya Majette had 16 tackles as the Vikings got their first win 20-17 over Winston-Salem State. Majette’s tackles total was tops for the week.