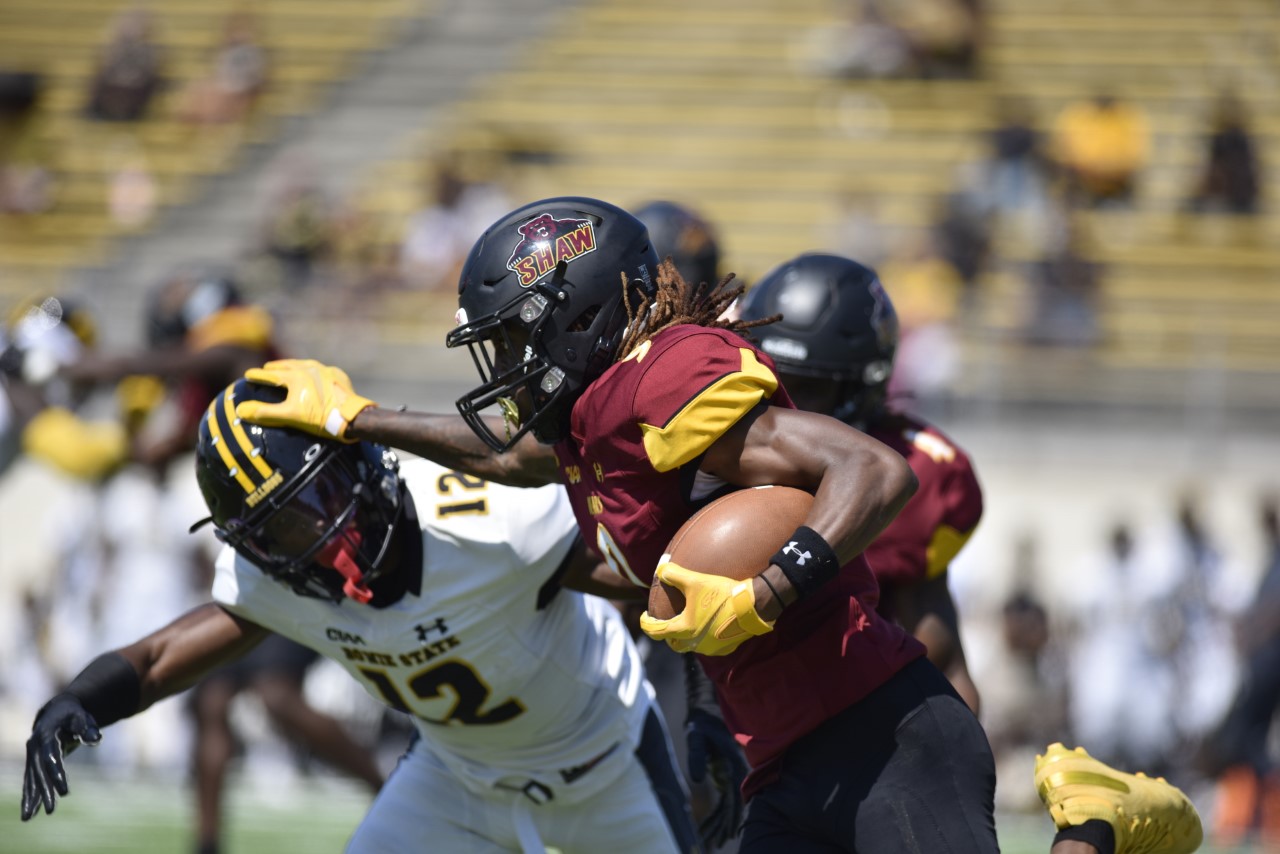 Bowie State falls to Shaw for first CIAA loss since 2017

Shaw University came away with a gritty, close win to hand Bowie State its first CIAA defeat in a long time.

BSU outgained Shaw 376-199 in total yardage including 236-98 through the air. The usually strong Bears rushing attack was held to just 101 yards.

Shaw became the first CIAA team in nearly half a decade to beat Bowie State. The last time BSU lost to a CIAA team was in Oct. 2017 to eventual CIAA champion Virginia State.

After both teams traded punts, BSU got on the board first with a scoring strike through the air on a 32-yard pass to go ahead 7-0 with just over three minutes left in the 1st quarter. Another Shaw punt followed the quarter break. BSU drove inside the Shaw 25 before a 33-yard field goal attempt sailed wide leaving the score at 7-0 with 11:26 left in the half.

The Bears got on the board with a 28-yard field goal from Armaan Nagra with 5:59 left in the second quarter. BSU mounted a drive inside the Bears 20-yard line with under a minute left but was put to an end as Akeythio Carson intercepted a Bulldogs pass with 31 seconds left to make the score 7-3 at halftime.

The Bears came out of the locker room on a mission as the offense put together their best drive of the day with Jon Barnesfinding the endzone from six yards out. Nagra added the PAT to put the Bears ahead 10-7 with 8:17 left in the third. Bowie State answered the call regaining the lead 14-10 scoring on 4th and short from the three-yard line with 2:57 remaining in the third. A roughing the passer call on Shaw aided the drive.

With 1:18 remaining Shaw found the offense it had been looking for all game as they put together a six-play 44-yard drive that ended in a two-yard Sidney Gibbs score to put Shaw ahead for good at 17-14 after Nagra’s second PAT.

The Bulldogs would get one final drive as they moved the ball across midfield but saw their comeback chance end with a Jaden Clark interception in the endzone as the clock expired.

Kareem Butler led Shaw in tackles with 8.5 total followed by Clark with 7. Carson added six with 1.5 tackles for loss and an interception.

The Bears return home for another cross-division matchup as they host Elizabeth City State University. Kickoff is slated for 1 PM.

Bowie State falls to Shaw for first CIAA loss since 2017