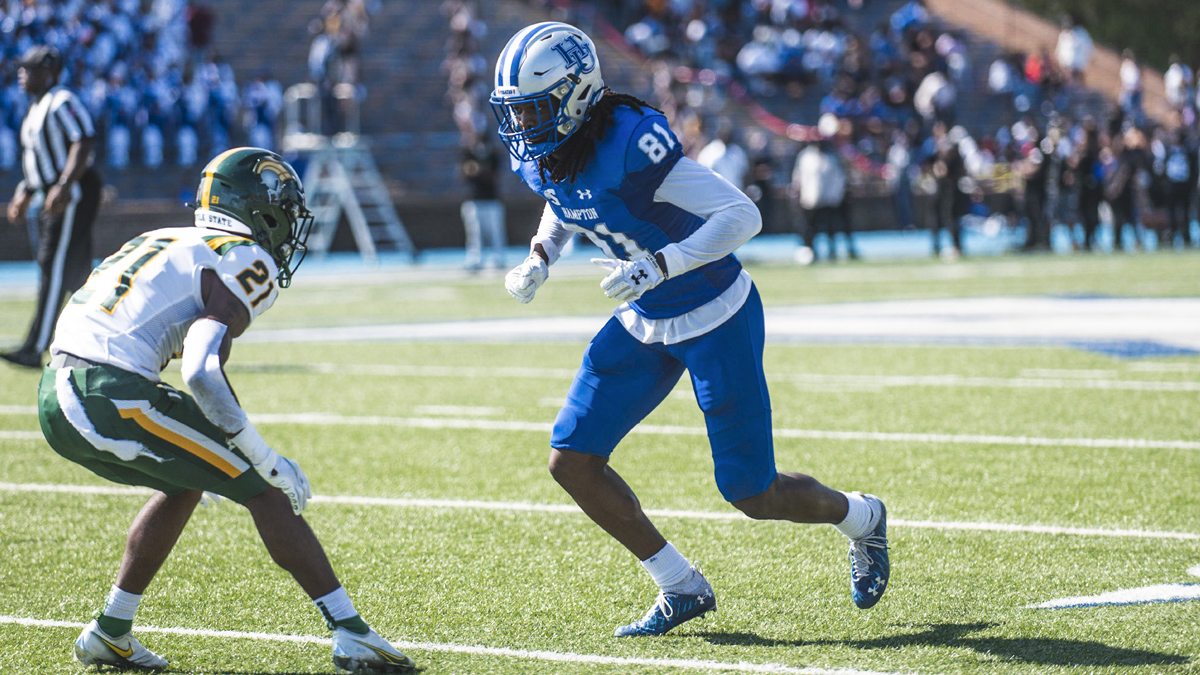 Hampton University has something to prove in the CAA

Hampton University is changing conferences once again, but it is planning on making a lasting impression in the CAA.

HAMPTON, VA — Hampton University is a place where tradition is inescapable. From Emancipation Oak, to the mid-campus bronzed statue of alumnus Booker T. Washington, the HBCU based in the city where the first enslaved Africans landed in America is surrounded by monuments of an enduring history of their home by the sea.

The winds of change, however, are blowing — and not just the breeze from nearby Buckroe Beach.

Hampton University enters a new school year with a new leader for the first time since the end of the Vietnam War as Dr. William R. Harvey has handed the helm of the Pirates’ ship to Darrell K. Williams. Meanwhile, venerable Armstrong Stadium is undergoing a face-lift with the addition of a new row of seating on the eastern end of the facility which is currently in its 11th decade of use.

Then, there is the football program. It too has a proud history, minus a 50-year gap between CIAA championships in the middle of the last century. Currently, however, Hampton football is in a familiar place — having to prove itself in a new conference. After leaving the Big South with just two seasons as a conference member, the coaches of its new conference — the Colonial Athletic Association — had Hampton set to finish 13th out of 13 programs. In other words, dead last.

Head coach Robert Prunty tried to put things in perspective at CAA Media Day. He realizes that Hampton hasn’t had a winning season since 2017 and it is coming into one of the more highly-regarded FCS conferences in the country.

“But also to have that 18 month layoff, no football in going virtual to school win for our players to come here and the coaching staff to do a great job getting these guys together and getting them prepared to play that season…It says a lot about the coaching staff and the players and what type of people we have around the program.”

Hampton finished 5-6 last season, beating a North Carolina A&T squad that is predicted to win the Big South Conference before joining HU in the CAA in 2020. It enters the 2022 season poll ranked just outside the HBCU Gameday Staff FCS Poll.

Hampton will bring along some old friends as it navigates to the CAA, just as it did in the Big South. It will take on former CIAA and MEAC rivals Howard and Norfolk State, as well as its old sister school in Tuskegee University.

Redshirt sophomore Stanley Garner is itching to get the football season started. The Fort Lauderdale, FL native joined Hampton last season after starting his career at Kentucky. He says he’s looking forward especially to the season opener when Hampton takes on archival Howard University in the updated Armstrong Stadium.

“We’re excited. It’s a rivalry game. It’s a traditional game,” Garner said. “Who’s The Real H-U? And everybody knows who is the real HU. But we respect Howard a lot, they have good competitors over there, so we respect them a lot.”

Respect is one thing the Pirates are going to have to earn in the CAA. But it has several athletes that teams will have to prepare for, particularly on the offensive side. Running back Elijah Burris is the reigning Big South Rookie of The Year while wide-out Jadakis Bonds already holds an abundance of Hampton records heading into his senior season. Both players were recently added to the Black College Football Hall of Fame Player of The Year Watch List.

But Bonds knows that his team is starting from scratch in the CAA, and he’s fine with that.

“We’re not really thinking about it,” Bonds said of Hampton’s low ranking in the preseason prediction. Us being in a new conference it’s gonna be some kind of doubt, us being an HBCU, coming from where we coming from. So honestly we’re just looking forward to playing the game of football.

Hampton University has something to prove in the CAA