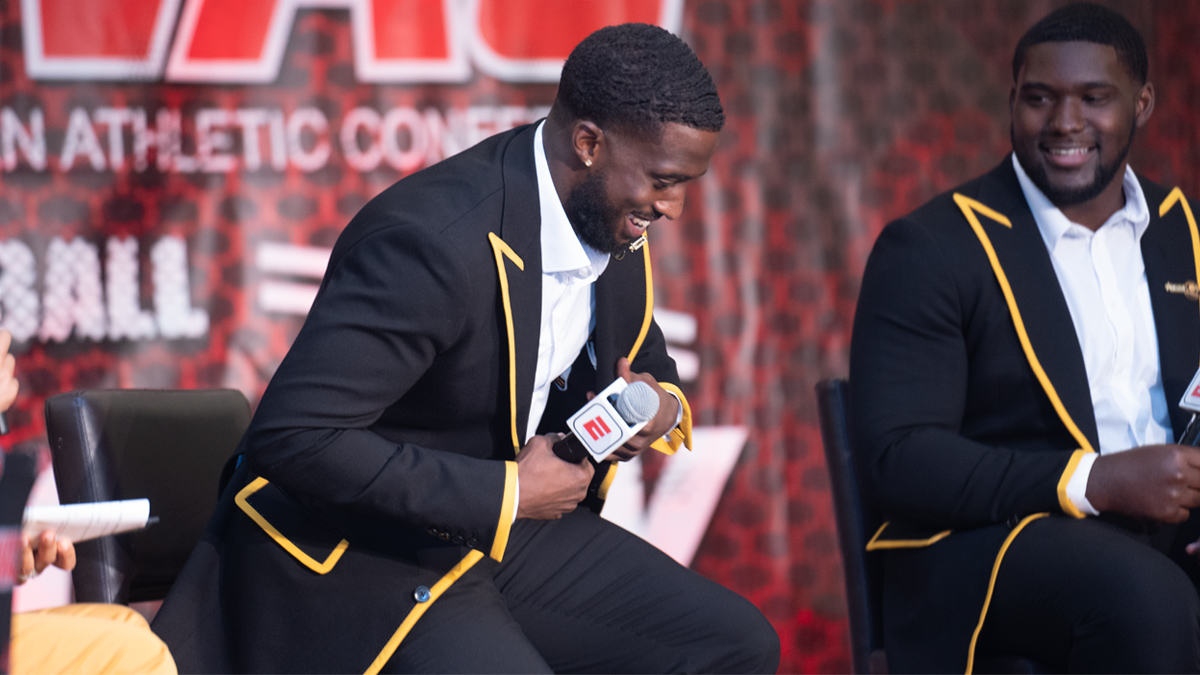 Grambling State players rely on teammates, game to get through hard times

The two young men showed up at the Birmingham (AL) Sheraton with eye-catching black suit jackets with gold trim that resembled a vintage prom ensemble that everyone seemed to have an opinion on.

But beneath the pomp-and-circumstance of their outfits, the two young men represented their school well in interviews. Both young men are bonded — not only through football — but through the loss of parents.

Reed told HBCU Gameday he lost his mother last year prior to the season. He describes the loss as the toughest thing he’s ever had to go through, but stated he felt he had to push through as one of the leaders of the program.

The Houston, Texas native said he and his mother bonded through the game of football.

“She made me watch film. She’s asking me questions, what can I do to make my game better or how do I feel I played, things like that,” Reed said. “She was always on top of me and that’s my main motivation because I know I can’t let her down and I can’t let myself down or my family. So that’s something we’ve lived. I’ve been playing football since I was five, my mom and of course, my dad, they’ve both been pushing me. But since my mom passed away, my dad played a major role and is helping me out a lot.”

Thomas knows first-hand the pain of losing a parent as well. He lost his father going into his senior year of high school at just 16 years old.

“I feel like we — sometimes — people forget like athletes are people, too. We both go through different things,” he told HBCU Gameday. “I lost my father and I feel like football just brought me out of a hard place in my life. It’s kept me focused. If anything, I’ll stay focused. And I felt like I was going to lose it all. But I’m on such a good track in my life right now. I’m not going backwards because I got football in my life.”

Both young men say they have each other to lean on, as well as the rest of their teammates.

“And like I tell them and just like you tell me if you have anything to talk about, whether it’s parents — life, anything —  I’m here for him,” Reed said. “Because I know he can’t call his dad, like I can’t call my mom about certain things that I want to talk to some people about. So I just let him know that I’m there for him 100 percent,  like I know he’s definitely 100 percent for me. And that goes to all of the other players on our team. You know, we have a bond, we are a family. So it’s like anybody’s going through something then we all are going through something.

And I feel like we all stick together and pick each other up.”

Thomas, a Baltimore native and Kent State transfer, says the moniker “GramFam” is more than just a hashtag.

“I mean, it’s an honor. You know, I feel like Gramfam and is just a big family. Everybody wants to be around everybody and then they just bring people in. I feel like me, J-Reed, we try to do our best job as captains to make everybody feel welcome. We got a lot of guys coming from the West Coast, East Coast who might not be from the Down South area and might need some guidance down here, you know.

“Especially dealing with the heat.”

Grambling State players rely on teammates, game to get through hard times