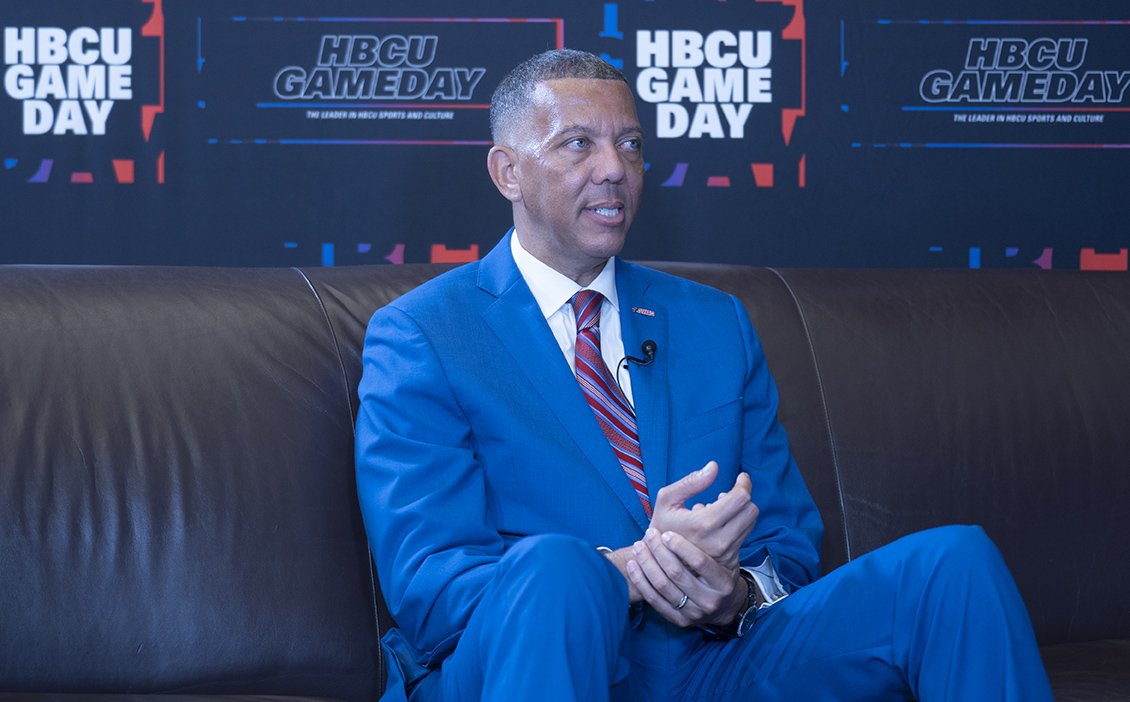 SWAC commissioner Dr. Charles McClelland sat down to talk to HBCU Gameday about the state of the conference at its annual media day on Thursday. This time, he had to wade his way through a sea of media to get to us. There was little time to sit idly by. Every time you looked up, someone had a microphone in his face asking him a question.

Eventually, though, our Tolly Carr got a chance to talk to the man in charge of one of the hottest conferences in FCS in terms of media attention and social interaction. You can also listen to the entire conversation here.

How does it feel to be chosen to chair the Division I Men’s Basketball Committee?

It’s kind of overwhelming. Still hasn’t set in yet. You know, in my opinion, the NCAA Tournament is the greatest sporting event of them all. I’ve been to a Super Bowl, I’ve been to the NBA final, have not been to a major League Baseball Game One through Seven. But the NCAA Tournament is just overwhelming. And to be selected by my peers, to be vice chair under Chris Reynolds this year and to be chair in 23-24.

Will the SWAC get a boost from this?

Well, everywhere I go, SWAC goes with me, so I think there will be some residual. The world will look at SWAC through the eyes of the basketball committee, and I think that’s significant. I think it breaks down barriers. I was telling my wife, you just didn’t haphazardly become chair of the men’s basketball committee, which means that there is credibility there.

That means that there’s honesty and integrity there. So I think we can overcome some hurdles to say, look at the SWAC now when it comes to some of these Power Five ADs. They have great institutions. They have great people. Look at the SWAC when it comes to some of these other things that are out there within the membership. And I just think it does break down some barriers.

“You start talking about our graduation rates, right. And you start talking about the mission of our schools. We take a lot of students that are not historically prepared for higher education, prepare them and then graduate them. And we’re doing the same with these student-athletes. Some of the jobs that are being done is just truly remarkable.

But now we’re entering into this phase where we are the first choice and we are the first choice because you can come to the SWAC and get a name, image and likeness deal as good or as big as you can get at a Power Five institution. They’re coming now because they can be seen on major networks. They’re coming because they can compete for a national championship on ABC and go to a bowl game.

And same thing with baseball, same thing with basketball. So it’s important. But we’re also checking off those boxes. You can come here and be a really big fish in our pond, in our lake and get some benefits, quite frankly that you can’t get at a Power Five school. By the way you can come and start right now where if you went to the University of X, you might be a junior or senior before you even get on the field.

Changes on the horizon

Well, the first thing that I would say to a lot of our SWAC nation and constituents is don’t necessarily believe everything that you hear, number one. Number one, don’t believe everything that you hear. I think we’ve been extremely transparent. And if there’s a time or issue we need to address, we will address it. If you don’t see me out there publicly, I’m not going to be out there publicly talking to everybody that has something to say positively or negatively.

We listen. We talked about the new initiatives that we’re trying to do with the cheerleaders and the band. They don’t fall under the SWAC umbrella, but we understood the importance and we also understood our ability to help them grow and we are committed to doing that. Most of the bands and cheerleaders don’t even report to the athletic entity.

They report to the academic entity. But because it’s important to our fans. We’re going to do things to help that grow and we listen to the fans. So our growth has a lot to do with what our fans say and the growth and the direction that they want us to go in. So continue to look at us.

Our presidents tell me what to do, and my job is to enforce the SWAC constitution and bylaws and to grow and enhance. So everything that we do, we do collectively. And there has not been one point in our historical journey that our schools have been on the same page, as strong as they are all on the same page now.

And I will continue to work for those schools. That’s my job. And like you say, some of the decisions might not be popular with some schools might be popular with others. But I think that we all can agree that our conference is growing and is growing exponentially as long as we stay focused and on the same page, we’re going to be able to achieve all of those goals that we set out to achieve.