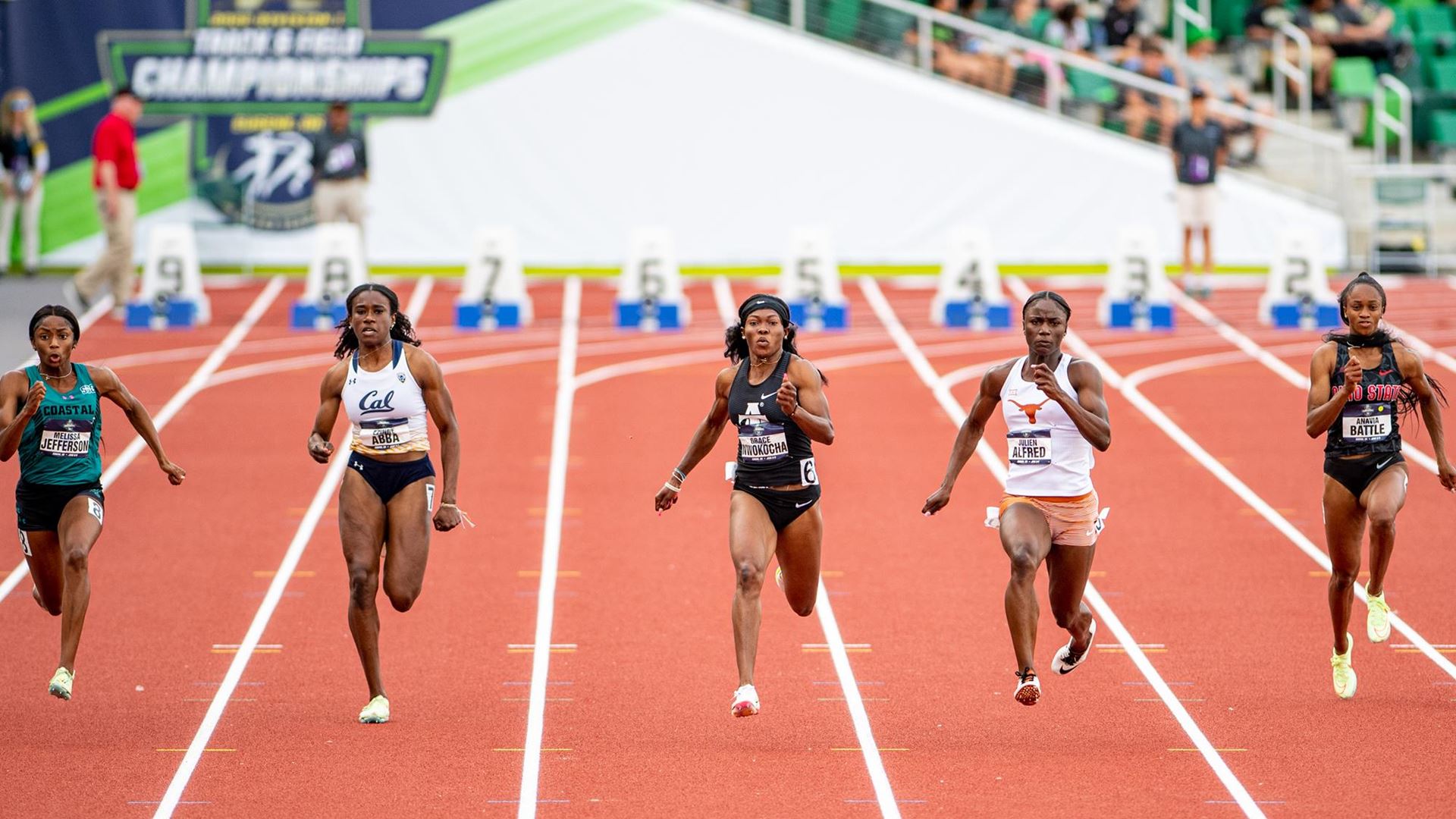 EUGENE, Ore. – For NC A&T women’s track, when you’re following behind or sharing a meeting room with North Carolina A&T great hurdlers like Kayla White, Madeleine Akobundu and TeJyrica Robinson, it is easy to go unnoticed.

But that is no longer the case for graduate hurdler Paula Salmon (Brooklyn, N.Y.). Instead, Salmon has an opportunity to do what none of those other greats did with NC A&T women’s track– win a national championship as a hurdler.

On Thursday, at the 2022 NCAA Outdoor Track and Field Championships at the University of Oregon’s Hayward Field, Salmon posted the second-fastest qualifying time (12.68) in the 100-meter hurdles to advance to the national final on Saturday.

Freshman teammate Grace Nwokocha advanced to two Saturday finals, including the 100 and 200 meters.

Salmon earned second-team All-American honors in the 100H last season. She is a two-time first-team All-American in the 60H. Salmon had an unfortunate fall during the 60H at the NCAA indoor nationals in Birmingham, Ala., in March.

Duane Ross, the Aggies director of track and field programs, said Salmon took time to reset and refocus after the NCAA indoor incident. Then, when she returned to the track, she locked in and relaxed.

“She’s a student of her event, and she learns and adapts very quickly, a trait all good hurdlers have,” said Ross. “What makes her different is her will to win. She’s extremely competitive.”

On Thursday, Salmon finished a little slower than her personal best time, which was a 12.63, at the University of Florida this season (April 16). She entered the NCAA outdoor nationals after running the fastest NCAA East Preliminary Round quarterfinal time in the 100H.

She won the third heat on Thursday, winning easily over Texas Tech’s Demisha Roswell (12.93). LSU’s Alia Armstrong had the fastest time with a 12.55. Salmon’s final is Saturday at 6:12 p.m. eastern standard time.

“Around her sophomore year, she really started believing she could be one of the world’s best,” said Ross. “We’ve always had good women hurdlers on the team, and she was in their shadows. Once she decided that she would be great, her performances outshined the others.”

Meanwhile, Nwokocha had her two best performances of the season despite not being an automatic qualifier in the 100 or 200m. The top two in each heat automatically qualify, and then the next top three times advance.

She had the seventh-fastest time behind three competitors who recorded personal best. The University of Kentucky’s Abby Steiner even broke the meet record by posting a 22.02 for the fastest qualifying time. The 200m final starts Saturday at 7:07 p.m. EST.

“Grace’s progress up to this point has been amazing,” said Ross. “She is one of the most talented athletes I’ve ever had. Her natural ability is incredible, and she’s a natural competitor. If she executes the first half of this race on Saturday, she can win it all.”

The Aggie men return to action on Friday, where junior Randolph Ross Jr. has a chance to repeat as the 400m and 4×400-meter relay national champion. In addition, sophomore Javonte’ Harding has a chance to win a national title in the 100m and the 4×100.