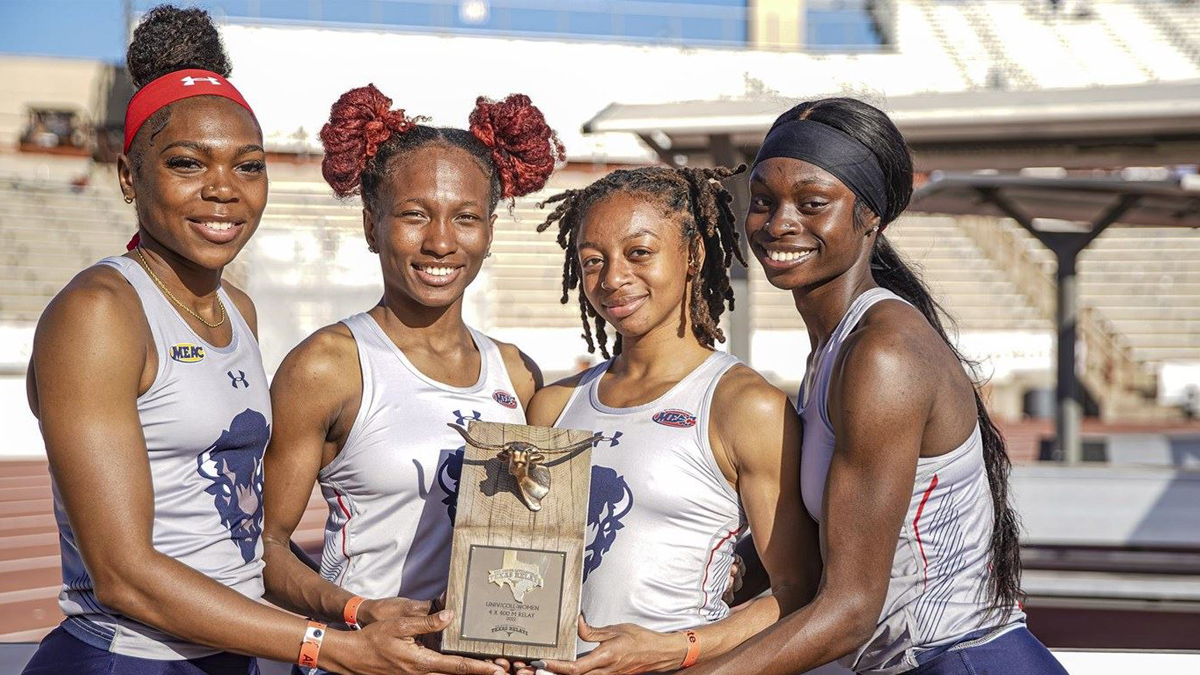 David Oliver has been building the Howard University women’s track and field program to compete on a national stage. This week it will do that in Oregon.

Howard University track and field coach David Oliver knows HBCUs have a long history of being competitive in track. The former HU star turned Olympic medalist also knows that his own program’s history hasn’t necessarily been as sterling as of late.

But he’s been working since 2018 to change that, and 2022 has been a breakthrough for HU — particularly on the women’s side. The HU women swept both the indoor and outdoor titles in the MEAC this season.

“We ended about a 40 plus year drought this outdoor season on the women’s side, picking up that MEAC championship trophy,” he told HBCU Gameday last week.

“I mean, the only time we ever won was the first year they had the MEAC championships in 1980 for women. So that’s outstanding,” he said. “We won indoors as well which was — I think —  it’s been like since ’84. Shoot, I was two years old, the last time we had won indoors.”

Oliver knows a lot about the history of Howard, having competed for the school in the early 2000s. He dominated the MEAC in the 110m hurdles before turning pro, eventually winning a bronze medal in the 2008 Olympics.

“I carry the same mentality that I had as an elite athlete here, because I can relate,” he said. “I mean, I slept in the same dorms. We went to the same classes, all the same things here at the student-athletes that we have currently in our program do. So I can relate and I can also know when to call B.S. on some things that they might be trying to get away with because I know better. I came from here. It might have been 20 years ago with the game hasn’t changed that much, you know, so it’s just really a mentality thing.”

Oliver took over the Howard University program in 2018, hoping to help his alma mater get back on track in the sport. He began laying the foundation for the program’s present success then and now his hard work is paying off.

“The young women on the team have really bought in,” he said. “They strive, they work hard. They could do pretty much all the things that are asked of them on and off the track from the coaching staff and myself. And I think that’s why they had the success that they have. As coaches like I say, often all I can do is teach a student-athlete what to do, when to do or how to do something. That ‘want to’ has to be provided by them.”

He knows from his personal experience that track provides HBCUs about as level of a playing field as it gets in college sports.

“Track and field is absolutely the sport where you can compete with the top schools in the country,” Oliver said. “We might not be able to do it from every event — 10K to the 100m…you take some of these schools and some of the events that we were really good in they stack us up, we’d be able to hold our own for sure. You know we would definitely wouldn’t be having any 63-0 type blowouts in track and field that we’ve experienced going up against these top dogs in football.”

This week Howard University will face off against the top collegiate track programs at the NCAA Championships in Eugene, Oregon. Seniors Jessica Gbai (200m) and Jessica Wright (400m) will compete as individuals as well as part of a 4×400 squad along with Ameenah Saalih and Ozimna Scott. That relay squad set a school and MEAC record in the event with a time of 3:28.91.

It is a chance for redemption for a group that felt it was close last year.

“I’m really excited for the opportunity,” Oliver said. “Last year didn’t go as we want it to with the relay but I think it was a good learning experience. Exposure is the best teacher so they got the exposure last year. We’ve been to high-quality meets — Texas Relays, Florida Relays, going through the regional rounds —  all this stuff that now they should have the level of expectation like — ‘yes, we’re not just happy to only be here now. We have to come here and make sure we thrive’ — so I’m really excited for next week.”

NCAA track and field championships will run from June 8-11th.