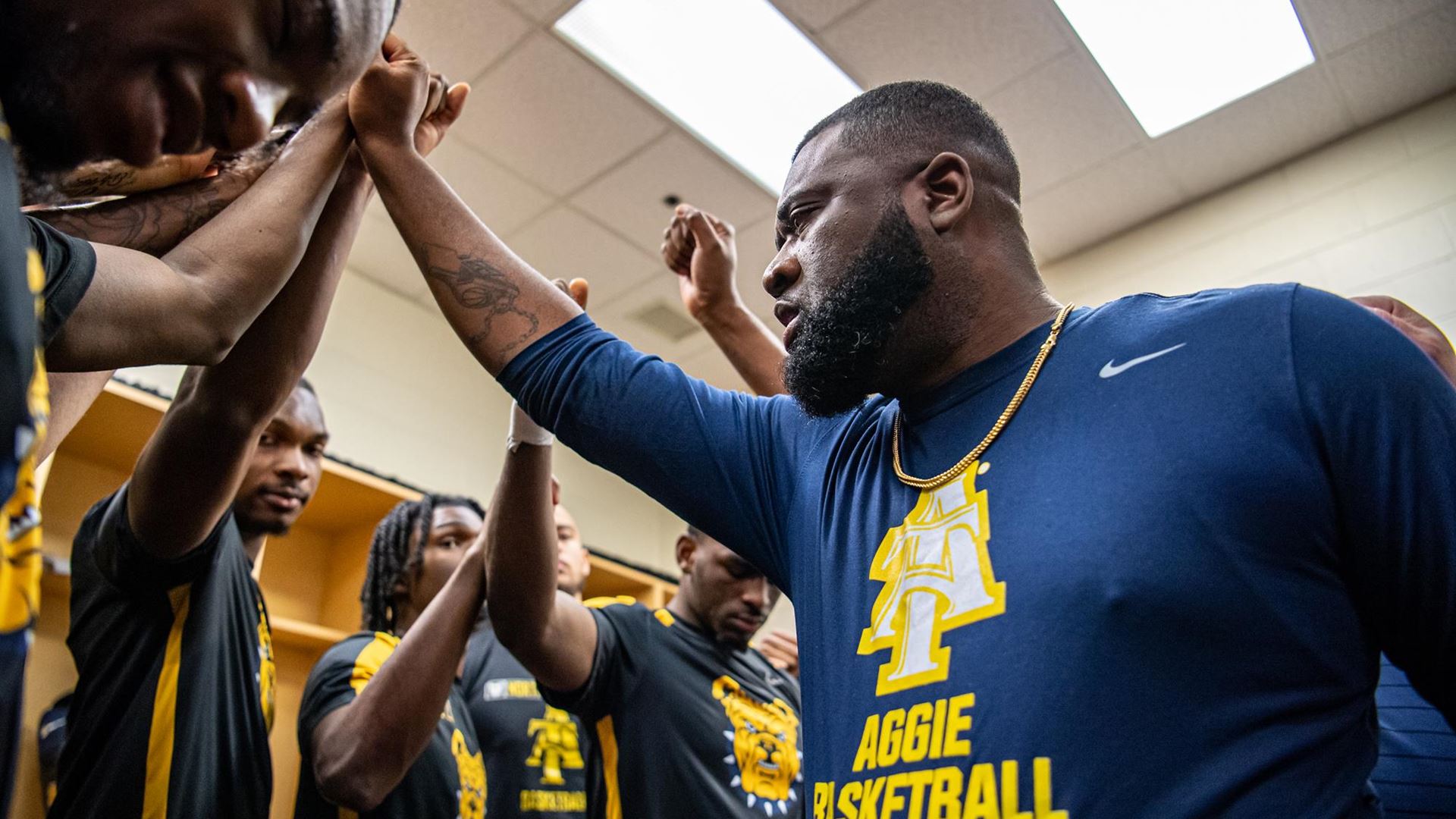 In a one-and-done era of college basketball, Jones and NC A&T basketball emphasized going get student-athletes that had several years of eligibility remaining to build a contender in their new league.

EAST GREENSBORO – NC A&T basketball men’s head coach Will Jones has announced the addition of five signees to his roster in the latest Aggies 2022 recruiting class, consisting of three guards and two forwards.

“Something we talked to this class about was, ‘Do you want to do something special?’ said Jones. “That’s the question I asked all these guys in letting them know the journey that we’re on as a university and as a basketball program. They have a chance to go into the (Colonial Athletic Association) together for the first time. This is the group that I want to take into the CAA.”

It was no secret to Jones and the NC A&T basketball staff that the point guard position would need to be a huge point of emphasis when on the recruiting trail with the loss of Aggie great Kameron Langley. Therefore, the men’s basketball staff didn’t just reload the position heavily, with three of the five players in this class being guards.

The first of those is Elliott, a three-star recruit and the 11th-best player in Georgia. He averaged 16 points, shot 51 percent from the floor, 45 percent from 3-point range and 81 percent from the free throw line. He also
hauled in four rebounds and dished out four assists per night.

“This class is really the first opportunity we’ve had since I’ve taken over to retool at the guard position,” said Jones. “To go out and get a couple of guys that can shoot, pass and dribble and have some speed and quickness was something that we put at the top of our Christmas list, and Tyrese was the first on the board. We’re excited about him.”

Elliott’s performances translated into a second-team All-State Class 7A selection and All-Gwinnett County and All-Region honors.

“Unbelievable young man,” said Jones. “A dynamic point guard that I believe has the chance to be an all-conference type of guy down the road in the Colonial. He is one of the top players in Georgia, and any time you can get someone like that, that’s pretty good.”

Woods played at Northwest State, where JucoRecruiting.com ranked him as a top-100 JUCO player. He helped the Raiders to a 31-5 record and the NJCAA national championship.

Before Northwest Florida, Woods played his freshman year at Troy and averaged 10 points per game.

At Pinson Valley, he scored 38 points per night and recorded 3,711 points in his career, sixth all-time in Alabama high school history. Woods is a two-time Alabama 6A Mr. Basketball and was named Alabama 3A Mr. Basketball as a sophomore.

“A couple of things we were looking for at the guard spot were someone that’s a winner and someone with speed and quickness,” said Jones. “Kam is somebody we came across and immediately put all our energy into signing. He played Division I already in the Sun Belt Conference and scored close to 11 points a game as a freshman, and won a national championship this year for the JUCO I worked at before.

He’s the first kid I’ve signed ever from that same JUCO, and it’s an exciting thing for me. It’s tough to get those kids. They go to many different places at a higher level, but he’s got a chance to come in here and be an excellent player for us from day one.”

The third and final guard in the class is Bettis. During his first year at Coffeyville, Bettis averaged 11.5 points and shot 45 percent from the floor, 40 percent from three and 93.7 from the line. In addition, he claimed honorable mention All-Kansas Jayhawk Community College Conference (KJCCC)accolades en route to a 27-3 record and NJCAA national championship.

“You look across the country at rosters, and HBCUs normally don’t get Coffeyville and Northwest Florida’s top players,” said Jones. “Love is another kid with speed and quickness, and he’s a winner. He won a national championship as a freshman, and he’s highly capable of scoring the ball from range.

He’s a good person and a dynamic get for us, and we’re lucky to have him. I think he also has a chance to come in from day one and change the dynamic of our offense in terms of his ability.”

Felton is the Power Five transfer this season after redshirting his freshman season with Arizona State. He spent his final high school season at Hargrave Military Academy in Chatham, Va. He led the team to a 31-2 record, scoring 15.6 points and grabbing 8.1 rebounds per game while shooting better than 74 percent from the field.

In his junior year at Millbrook, he became CAP-7 conference player of the year after averaging 20 points, 11.2 rebounds and 2.0 blocks per game, thanks to his 7-foot wingspan. He recorded a double-double in 22 of their 25 games that season.

“We were intentional about who we were looking for to play the 5,” said Jones. “Moving to the CAA opened us up more to attract some different guys, and Will Felton was one kid. I started recruiting him when he was a junior in high school and obviously, he went to Arizona State. Once he became eligible into the portal, we went after him automatically.

We wanted a big that was going to have girth and size and mass, and we also wanted somebody that was going to be in our program for more than one year. Will showed up, 6-foot-8, 265 pounds, and he will be with us for four years. He’s an unbelievable rebounder, defensive guy, and he’s just physical, and we’re looking to continue to develop that.”

Johnson averaged 5.8 points and 6.0 rebounds per game while shooting 80.6 percent from the free throw line at Cal-Irvine last season. He also blocked 2.4 shots per game, which ranked him 23rd nationally.

Through his freshman and sophomore years, Johnson played 59 games and averaged 4.7 points and 3.6 rebounds per game. He led the team in field goal percentage as a sophomore at 52.4 percent. He shot 62.5 percent as a freshman.

“We wanted the size and the girth in a big man, but we also wanted one long, lengthy shot blocker, defensive guy, finish around the rim guy, and Austin brings all of that to the table,” said Jones. “He’s been on the west coast for three years and was one of the best shot blockers in the country last season. He brings us a big similar to what we had in Ron Jackson and Devin Haygood. He fits into that mold, and he’s just a great kid and a workhouse.”

In a one-and-done era of college basketball, Jones and NC A&T basketball emphasized going get student-athletes that had several years of eligibility remaining to build a contender in their new league.

“I wanted to build a solid foundation of guys that will be with us for more than one or two years, and I think we addressed those needs. We will go in there being competitive and a tough team to play. We will have a chance to win night in and night out and compete for a championship. That’s always going to be what we want. That’s what I recruit to do. That’s what A&T is about, and that’s what we’re going to get done in the league.”