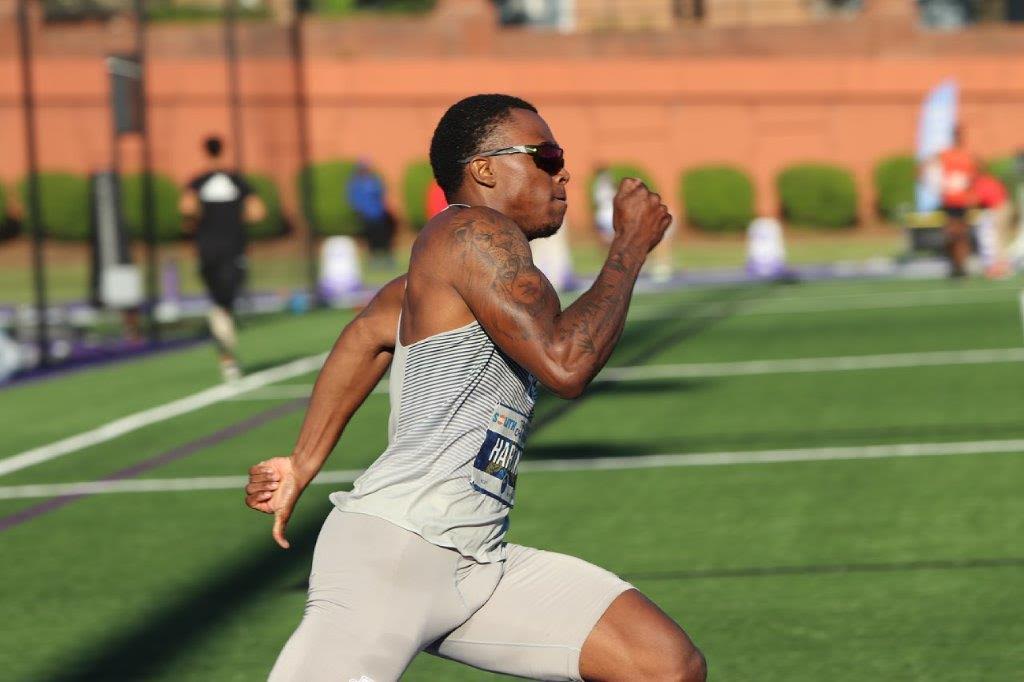 Sophomore sprinter Javonte Harding (above) is one of the track stars the Aggies will count on as the Big South Outdoor Track & Field Championships enters its final two days. (Michael Simmons Photo)

NC A&T tracksters will have their work cut out for them as they try to win the Big South Men’s and Women’s Outdoor Track & Field Championships over the next two days at High Point University’s Vert Stadium.

In this their only year in the Big South before moving to the Colonial Athletic Association (CAA) next year, the highly-regarded Aggies will enter Day 2 of the championship Tuesday trailing on the both the men’s and women’s sides.

The host High Point women and men lead after Day 1, with the ladies totaling 20 points and the men scoring 70. The Panther men were dominant in the pole vault and javelin to score 60 of their points and lead the competition after Monday’s Day One. The Panthers finished 1-2-4-7 in the men’s pole vault to score 26 points and 1-2-6-7 in the javelin to add another 23 points.

The NC A&T women are in third place with 18 points, and the men are tied for fifth place with 10 points. Hampton, who is also leaving the Big South to join the CAA after this season, is second on the women’s side with 19 points and eighth for the men with five points.

While the early competition in field events favored others, before Monday’s competition was over, both Aggie teams showed their best is yet to come.

In what was primarily early round competition on the track late Monday, the Aggies broke five Vert Stadium records, four Big South outdoor championship meet records and three Big South records. But the Aggies did come through with some field events wins also.

Senior Brandon Hicklin started the record-breaking with his men’s long jump win. Hicklin, the No. 1 long jumper in the nation, jumped a stadium-record 24-feet, 11 1/4-inches. Hicklin’s first four jumps included three fouls and a 23-foot, 4-inch leap before he masterfully nailed his fifth jump to win the competition.

Senior Jasmine Jenkins also claimed Big South gold as she took first place in the women’s hammer with a throw of 179-feet, 2-inches. Her winning throw came on her first toss. Jenkins went into the championship meet ranked No. 1 in the Big South. She won the Big South championship in the weight throw during the indoor season.

“Those two wins were expected,” said A&T’s director of track field programs, Duane Ross. “But it’s always good as a head coach when you see your athletes come in and do what they’re expected to do. I tell them this all the time, ‘If you’re expected to win, then that’s what you better do. Or if you don’t win, somebody actually beat you.'”

Once the early round running competition started around 6 p.m. Monday, NC A&T showed its stuff.

They were more dominant in the women’s 200 meter prelims. Freshman Grace Nwokocha broke the meet, Big South and stadium record with a personal-best 22.75. She led an Aggie sweep of the top four qualifiers as graduate Symone Darius ran 23.09, graduate Delecia McDuffie ran 23.17 and sophomore Jonah Ross was clocked in 23.39.  Each easily won their heats.

A&T also had three qualifiers in the women’s 400 meter hurdles led by sophomore Nia Frederick, who ran the fourth-fastest qualifying time at 1:00.46. Graduate Breanne Bygrave was fifth (1:00.71) while freshman Amanda Kinloch was eighth, with a personal-best (1:02.40).

Senior Devon Williams ran a personal-best 3:58.61 to qualify for the men’s 1500 meters final. Graduate Loren James scored for the Aggies in the women’s hammer throw by finishing sixth with a throw of 164-feet, 1-inch. Sophomore Jade King scored in the women’s long jump with a fourth-place leap of 18-feet, 10 1/2-inches, a personal best.

“We did well today, but this will be a tough meet,” said Ross. “High Point has a lot of depth in a lot of areas. But we are not going to leave the battlefield without a fight, so we are going to come out here and do what we do and get ready for the regionals and the nationals in the process.”