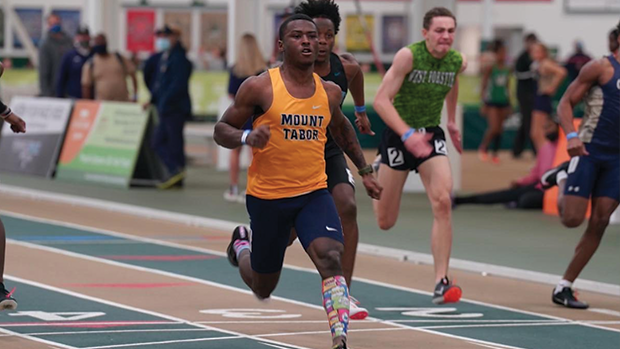 And it was a major signing.

Terrell Robinson, ranked among the nation’s top high school sprinters, chose Saint Augustine’s track over Division I schools Texas, Kentucky, Iowa, North Carolina A&T and Florida. A student at Winston-Salem Mount Tabor High School, Robinson ranked No. 2 in the 55-meter dash (6.24) and No. 9 in the 60-meter dash (6.72) in the United States this winter.

“He is a phenomenal kid with so much upside,” said Jackson, a world champion and Olympic medalist as a 400-meter hurdler. “I look forward to an amazing journey with him.”

“Saint Augustine University, an NCAA Division II program that resides in Raleigh, North Carolina, was (Terrell’s) final pick. Robinson’s decision might come as a slight surprise, given that he has competed for years alongside athletes who are headed to Division I universities. But you would be remiss if you discounted a strong coach-athlete rapport. ” Writes Garrett Zatlin of MileSplit.

“At the Division II level, the Falcons are considered a modern-day track and field powerhouse. The men and women have amassed 39 team titles on the track throughout the team’s history, with their latest title coming in the spring of 2017.” Zatlin writes of Saint Augustine’s track’s legacy.