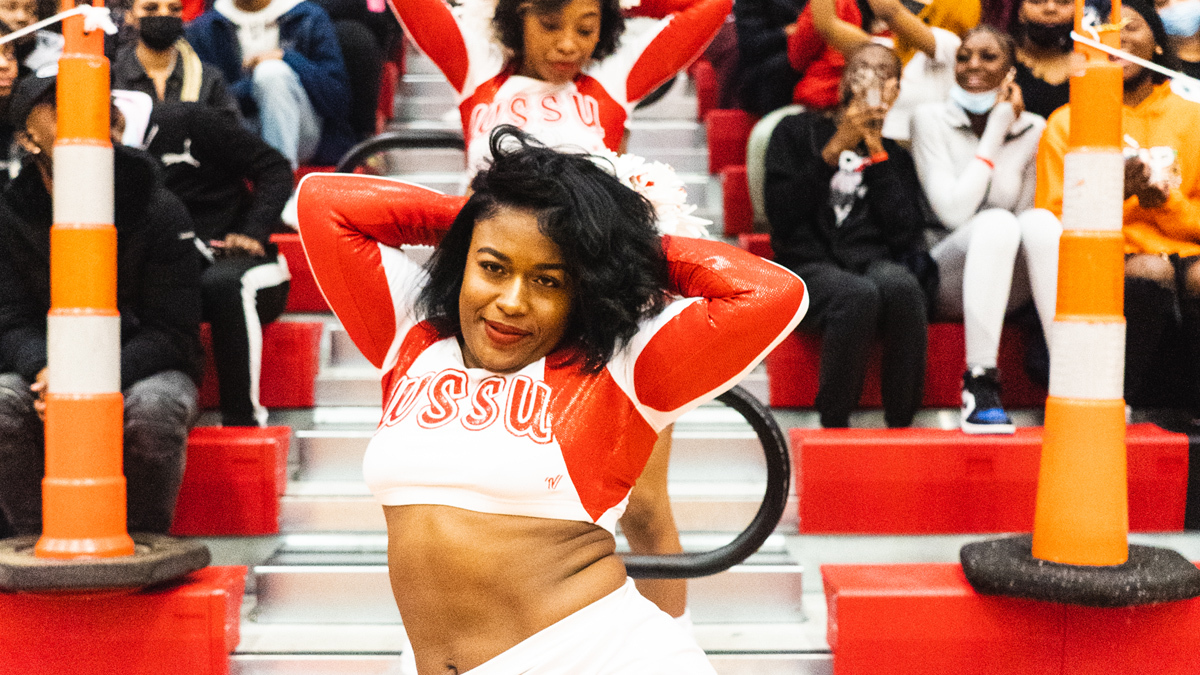 The “Get It Girl” campaign, features 12 female collegiate athletes.

Rapper Saweetie was recently named as the latest spokeswoman for Champion athletic wear. Her “Get It Girl” campaign, which uses Saweetie’s song, features 12 female collegiate athletes, among them Winston-Salem State University’s own Destiny Martin.

Martin, a Powerhouse Red and White cheerleader, was “flabbergasted” when Champion reached out to her via Instagram and invited her to an official brand ambassador. Champion spotted Destiny Martin on TikTok where her dynamic and energetic style caught the attention of the company.

“It was very random (to be selected by Champion). We’ve been going viral on TikTok almost every basketball game and my assumption was maybe they saw me on one of those videos because I was often at the front,” said Martin.

Martin signed a two-year Name, Image, and Likeness (NIL) deal. As part of her deal, she will have access to mentors and other resources to help develop her professional career interests within the areas of sports, entertainment, media, and marketing all the while getting paid for her involvement.

“I am not always God’s favorite, so I’d never expect such a big opportunity as this to happen for me. I ended up doing some research on the company as well as talked with an athlete from North Carolina A&T, who was also a part of the campaign, just to make sure that this was all really happening.”

Suddenly Destiny Martin was in a whirlwind. Within two weeks she had signed the NIL agreement with Champion, flew to Los Angeles, posed for countless still photos, and shot a commercial with the other 11 female collegiate athletes picked for the project.

“Literally, it all happened so quickly. I flew to Los Angeles and was in California for three days. It was great. I had hair and makeup people at the different sites we went to. I saw sites in California that I’d always wanted to see, and I met amazing people on set,” recalled Martin.

“When I arrived there, I didn’t realize I was going to be part of the commercial, but all of that ended up changing and I signed another contract for the commercial.”

In the most basic terms, NIL is a term that describes the means through which college athletes are allowed to receive financial compensation for use of their name, image, and likeness through marketing and promotional endeavors. The NIL rule was enacted by the NCAA in the summer of 2021.

“I was shocked when they changed this rule,” said Martin. “Never in a million years would I expect companies to invest the amount of money that they are so willing to invest in college athletes. It is truly amazing.”

The flurry of activity around the campaign came in the days just ahead of the CIAA basketball tournament which created a challenge for Martin.

“At first I only told my coach I had been picked because we had practice for the CIAA tournament when the campaign shoots were going on in California,” said Martin. “As soon as I got back to town and got on the bus to the tournament in Baltimore, I told the team.”

Under her contract with Champion, Martin must make campaign-related posts monthly to Instagram and TikTok. She also has a closet full of Champion clothing to wear as the brand influencer.  She is in contact with her brand advisor at least once a week to discuss the campaign and other opportunities.

Martin said she did not have a huge social media following before she was picked.

“My thought was that most companies selected individuals with a big following, but some of us had a pretty normal following. I thought it was great that Champion utilized athletes with true talent instead of just basing it around who can bring in the most profit.”

She said that since she began her role as a Champion brand influencer, her following has grown.

Martin said of the most satisfying parts of this process wasn’t the fact that she was picked, but that cheerleaders were chosen for the campaign along with other college athletes.

“I was surprised cheerleaders were selected because a lot of people claim cheerleading isn’t a sport. We as cheerleaders endure long practice hours and injuries just as the next athlete does, so it spoke volumes about Champion’s brand and the ideals that they stand on to have incorporated not one, but two cheerleaders in the campaign.”

Destiny Martin’s selection has literally been life-changing. Prior to February, she was planning on accepting a job with a digital marketing firm when she graduates this spring. Now, she will return to WSSU in the fall to begin work on her MBA. With an added year of eligibility because of the pandemic, she will be back in uniform as a cheerleader for the university.

“This campaign has been so eye-opening to me,” said Martin. “Covid took a year away from us. After the Champion opportunity came up, I decided to come back. I’ll pursue my MBA and for next year will continue to cheer.”

Destiny Martin will continue to document her journey via TikTok and Instagram.