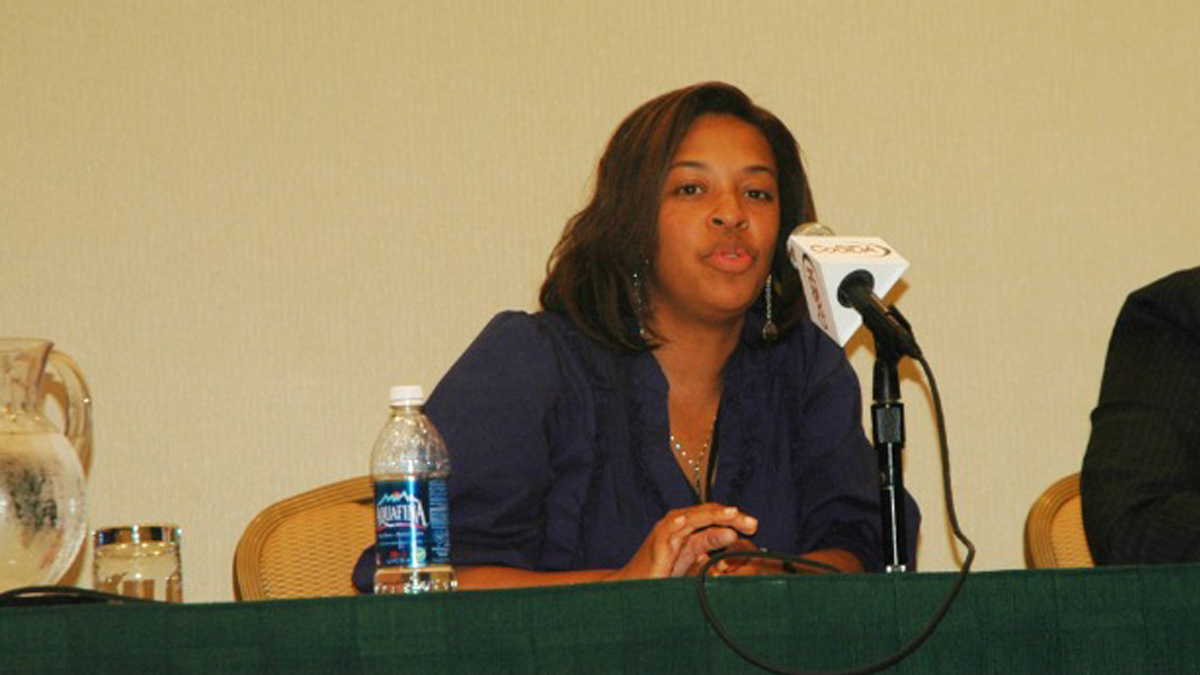 April Emory, a St. Paul’s College alumna, is being honored for her trail-blazing work as a sports info director.

A trailblazer as defined by Merriman Webster is someone who “blazes a trail to guide others; a pathfinder” – and that is exactly what April Emory, the 2022 CoSIDA Mary Jo Haverbeck Trailblazer Award winner, has done for me and countless other women in the industry.

April was the first Black women to serve on the CoSIDA Executive Board of Directors in 2005 when she was selected to fill the final two years of an open Board term while at Elizabeth City State University, an NCAA Division II and Central Intercollegiate Athletic Association school in Elizabeth City, NC. She then she went on to serve another three-year term on the board, carrying on in her leadership duties through 2010.

When Emory thinks about being a trailblazer, it’s hard for her to really wrap her head around it.

“To be honest with you, I did not think me,” said Emory. “I’ve always seen myself as somebody who was just doing what I loved at the time. I didn’t see myself as someone who was carving any type of path. I was in awe of my surroundings and loving everything about the energy of athletics.”

Emory opened a door for numerous Black women in leadership in CoSIDA and paved a path for me to become the first Black woman to serve as CoSIDA President in 2022-23.

Without April on the Board, I don’t know that I would have ever thought that being on the CoSIDA Board – or even being in any leadership position – would have been possible as I’d never seen anyone that looked like me doing it … until April Emory.

As she reflects back on her time in our athletic communications profession, Emory shared some of those who she considers trailblazers.

“When I think of a trailblazer, I think of who this award is named after, Mary Jo Haverbeck, the late associate SID at Penn State.  I had the pleasure of knowing throughout my career. She was a confidant of mine and somebody who I would call and ask for advice,” noted Emory.
“She is who I think of. I would never in a million years think that I would be in the running for an award like this. This is very humbling. Sometimes we’re so busy doing our jobs and wanting to do well … you just want to do things that are going to be a good reflection on the people you love and the thing that you love, and that’s all that I was doing.”

A theme for Emory throughout her career has been making herself and those that she loves proud. There is no doubt she has done just that.

“You try to go out and do the best that you can,” Emory reflected. “I was just working hard and wanted to be happy with the effort I put forth. You just want to be able to look into the mirror and even when the accolades or acknowledgements aren’t there, know that your work would speak for itself.”

While Emory is currently out of college athletics, doing freelance communications and event planning, she is so proud of where the CoSIDA organization is currently. In many ways, Emory helped build this foundation.

“I don’t think there is any organization that is more impactful on college athletics than CoSIDA,” said Emory. “There is so much that we do on behalf of our institutions and conferences, in being able to tie everything together. We’re the foundation of so many angles in collegiate athletics.

CoSIDA has done a good job of recognizing how important diversity is and evolving with society as a whole. The organization always has its finger on the pulse and has led by example.”

When asked about those that she considers trailblazers, she lands on her Nanny, her grandmother Gladys.

If you know April, you know that she has no shortage of people in her corner and she’s thankful for each one of them.

“There have been so many people that have been good to me along the way,” said Emory. “My parents, my sisters, my grandmother. Monique Smith and the entire CIAA family have all played such an important role. I gained so much encouragement and lasting friendships from my extended CoSIDA family… there are too many to mention. My girls/colleagues in the business and in life, Shera (White), Tiffani (Sykes) and Myra (Blow) are my “go-to’s” when it comes to being able to laugh and enjoy life and being able to embrace change as it comes.”

Personally, I want to thank you April, from one Trailblazer Award winner to another, thank you for carving a path for me to become CoSIDA’s first Black female President! Without your example I would have never been able to dream so big.

This story is written by Jessica Poole and originated on CoSIDA.com

364
The Latest in HBCU Sports and Culture