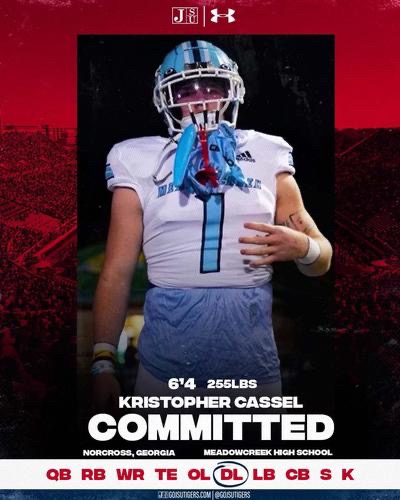 Jackson State added some depth to its 2022 recruiting class as well as its defensive line with the addition of this Georgia signee.

Although Jackson State went perfect in SWAC play in 2021,  it also had some areas where it was thin depth-wise. One of them was defensive line.

The JSU defensive line just got one man deeper as it received a March commitment from Kristopher Cassel.

Cassel announced his decision via Twitter on Thursday night.

“Committed and time to go to work,” he tweeted. “This next chapter will be special ❤️!”

Cassel is listed as a 6’4, 245 defensive end and hails from Waycross, GA. He signed his National Letter of Intent on Thursday as well. Cassel began to see interest from FBS programs after his sophomore season and he felt his football knowledge was a big reason for that in addition to his physical gifts.

“I am seeing growth in my football IQ. I am recognizing plays from watching films,” he told Recruiting News Guru. “Now, I am understanding what is going on. My football IQ and being more physical. I have gotten way bigger and way stronger than I was last year.”