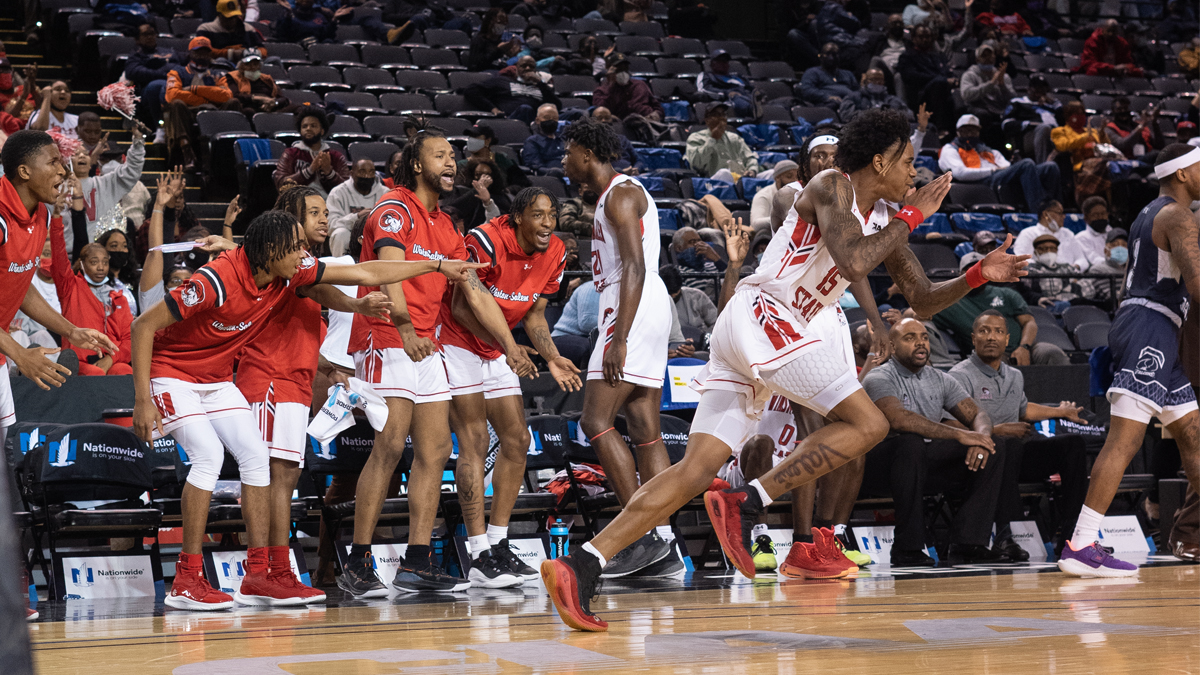 Winston-Salem State took care of business against St. Aug in the quarterfinals of the CIAA Tournament.

BALTIMORE — It’s been two years since Winston-Salem State went to the CIAA Tournament and won it all. A lot has changed in the world and in the program, including many of the key players.

Thursday night’s quarterfinal matchup against St. Augustine’s was the first tournament game for most of the players in red and white, but they played like a group that had been together for years.

WSSU used a scorching shooting performance to open its title defense with a comfortable 86-57 win over its Southern Division foe. It advances to the semifinals where it will meet the other blue blood CIAA program in Virginia Union.

Leading the way for the Rams was redshirt senior guard Javonte Cooke who had a season-high 31 points on a night where it seemed like he and his teammates couldn’t miss. The All-CIAA selection hit 10 of his 13 field goal attempts, including seven of his nine 3-point attempts while also grabbing eight rebounds, dishing out three assists and registering three steals and two blocks.

“I feel like as a team we brought a different mentality because it’s tournament time,” Cooke said after the game. “We know what we came here for. We’re not going to stop until we get it right.”

Cooke is one of the newbies for WSSU. He played at Mars Hill before coming to WSSU prior to this season, so he’s looking to add a CIAA title to his career. Cameron Campbell is in a similar situation as he transferred from Lincoln (PA). He added 11 points to the winning effort along with freshman Samage Teel who scored an efficient 13 points on 5-for-8 shooting as WSSU shot 61.7 percent from the field as a team and just under 67 percent from the 3-point line.

I came here two years ago with no other mentality but to win a championship,” Campbell said. I feel like I’ve done everything else in this conference I can do. So my biggest goal and my biggest mentality was just come here and win the championship no matter what role he put me in. So I just thank the coaches, thank my teammates for just trusting and believing in me, and just allowing me the opportunity to perform on a bigger stage.”

To get back to the championship game, WSSU will have to go through Virginia Union. VUU barely survived its quarterfinal against Bowie State on Wednesday, but it handed WSSU two of its six losses this season. Not that head coach Cleo Hill needed to be reminded of it.

We saw the bracket, we saw it early. It’s not something that we’re going to run away from,” Hill said. “They beat us in the (Chris Paul) classic in Connecticut and then when we came down to Richmond. I thought they played very well. I thought we were a little out of sorts down there. But give them credit Coach Jay and Fred they were prepared. We think we’re a different team now.”