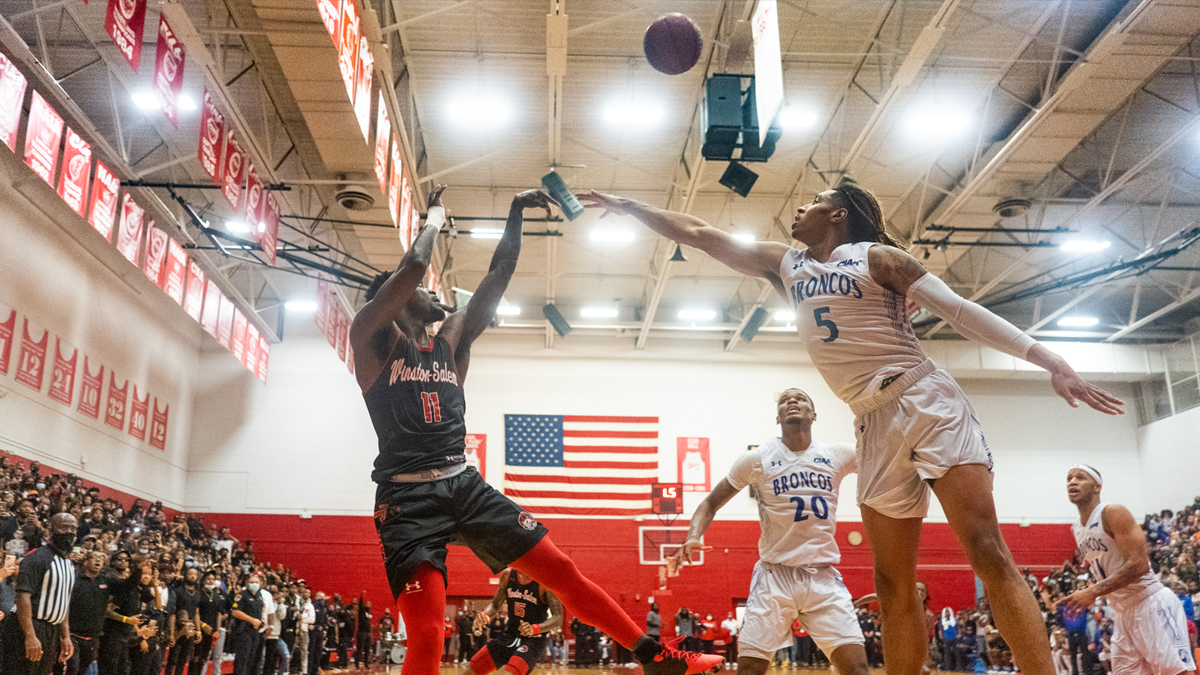 Fayetteville State once again walked off the court with a bitter taste as WSSU takes control of the CIAA South on a buzzer-beater.

WINSTON-SALEM, N.C. – It took 39:59 in another epic battle between Fayetteville State and Winston-Salem State before John Hicklin’s jumper slipped through the net as the final horn sounded, lifting WSSU to a dramatic win before a jam-packed crowd at a-rockin’ and hot C.E. Gaines Center.

Rams fans responded, rushing the court to celebrate with their heroes.

The game was reminiscent of WSSU’s win over the Broncos for the 2020 CIAA Championship which the Rams won on Rob Colon’s three free throws with 4.6 seconds to play.  It gave WSSU sole possession of first place in the CIAA’s Southern Division with a 7-1 record and 11-3 conference play.  It also preserved the Rams undefeated season at the Gaines Center (9-0), improved the overall record to 17-5, and is the 11th win in the last 12 games.

WSSU celebrated Rams seniors Cameron Campbell, Jonathan Hicklin, Xavier Fennell, Javonte Cooke, Rasheen Merlin, and Alexander Reed in a pregame ceremony, and they didn’t disappoint.  Cooke led the Rams with 20 points and eight rebounds, Hicklin scored 10 and grabbed eight rebounds.  Merlin had one of his best games of the season, scoring nine to go along with three rebounds.  Samage Teel finished with 14 points.

Fayetteville State led by 10 for most of the first half before WSSU mounted a late rally to cut its deficit to 30-28 at intermission.  The Rams finally tied the game at 40 with 14:09 remaining in the second half and gained its first lead, 43-42, less than a minute later on a three-point basket by Teel.

From that point forward it was a back-and-forth battle to the end.  The Broncos went up by four points before the Rams rallied to regain a one-point advantage on Teel’s two free throws with 7:53 to play.

Rams Coach Cleo Hill, Jr. called a timeout with 17 seconds to go, setting up the final play.  Teel drove the lane and missed the layup, but Hicklin was there to claim the offensive rebound and scored on a jumper as the clock hit 0:00 sending Rams fans into a joyous frenzy.

WSSU puts its perfect Gaines Center record on the line Wednesday night when Johnson C. Smith visits for the last home game this season.  The game tips off at approximately 7:30.