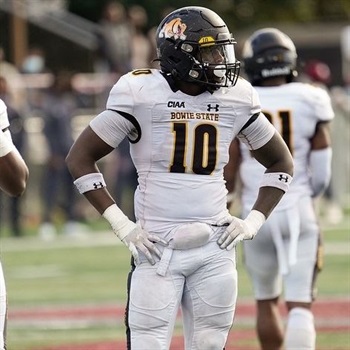 Bowie State All-American defensive lineman Jonathan Ross has decided to hit the transfer portal instead of return to the CIAA champions.

Ross, a 6’3, 270 pound defensive lineman from Waldorf, MD, was a redshirt sophomore this past season. He started both seasons at BSU, amassing 126 tackles, 41.5 tackles for loss, and 15 sacks during that time.

Ross emerged as a dominant threat on the defensive line during his freshman season, but solidified that position this past season.  Ross’ efforts were part of a larger effort that saw BSU advance to the NCAA Division II playoff national quarterfinal round.  That run was the best ever finish in the playoffs for BSU.

His productivity during the season resulted in national recognition from several outlets, including the Division II Conference Commissioner’s Association (D2CCA) naming him the Ron Lenz National Defensive Player of the Year.  Ross’s 29 tackles for loss in 2021 led all of Division II, and it wasn’t close – the second highest individual in the country was Fayetteville State’s (and CIAA Defensive Player of the Year) Keyshawn James with 23.5 tackles.

It’s highly likely that Jonathan Ross will emerge on a Division I squad, as he has already amassed offers from Bethune Cookman, Delaware State, Norfolk State, Tennessee State, and Austin Peay. Wherever he lands, there are two things certain. First, a team will be picking up a player who has shown the potential to be a game breaker on defense.  Secondly, the loss is huge for BSU, as Ross would have otherwise continued to anchor that defense for seasons to come.

*Note: Ross was also the CIAA’s 2019 Defensive Rookie of the Year