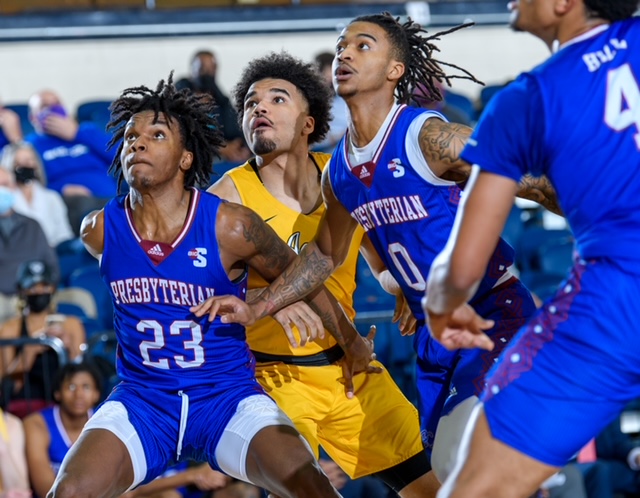 NC A&T battled back from an early deficit to hold serve on its home court in the Aggies firsr-ever game as a member of the Big South Conference. The Aggies Jeremy Robinson here battles three Presbyterian players for a rebound. (photo courtesy NC A&T Athletics)

GREENSBORO, N.C. – NC A&T went into its first game of the new year and its first game in their new league, the Big South Wednesday, facing a lot of adversity.

The team was not able to practice at all for four days after Christmas as the team was riddled with COVID-19 positive tests. As many as eight Aggies were stricken over the Christmas break limiting preparation time. The Aggies limped into Corbett Gymnasium for its league opener here vs. Presbyterian still down four players.

It didn’t help when Will Jones’s team was hit with a 10-0 run by the Blue Hose to open the game. They regrouped however, tied the game at 29 by halftime and pulled away as Jones rode them hard in the second-half to a history-making 65-57 win.

“We had to protect home court,” an adamant Jones said of his team’s maiden voyage in the new conference. “It means something to us. And the guys who played tonight laid it on the line. One-and-0 in the Big South, shorthanded. We showed some character tonight. It’s a big win for us.”

“We don’t know what (the future of) COVID is going to look like,” Jones said of his and his team’s mindset and preparation for the opener. “So, we need to win every time we have a chance to play. Right now, we’re 1-0 and that’s what we talked about all week.”

The Aggies didn’t score in the first half until almost five minutes had gone off the clock. Junior guard Demetric Horton’s fast break layup off an assist from Justin Whatley and his ensuing made free throw were the first points in a 16-0 Aggie run over the next four minutes.

“Our guys had to get our feet back under us, our legs back under us,” Jones said. “After the media (timeout), we talked to them, challenged them again and I think they responded, came out and took the lead.”

The teams battled back-and-forth from there through six first-half lead changes before going into the half with their sixth tie of the period. Horton’s 14 first-half points led the Aggies. Along with Marcus Watson’s seven and David Beatty’s six points, they accounted for all but two of A&T’s points in the first 20 minutes. Winston Hill and Kobe Stewart each had eight in the half to lead the Blue Hose.

NC A&T takes over down the stretch

The most critical juncture of the game came early in the second half when the Blue Hose went cold after going up 35-34 on a layup by Hill at the 17:07 mark. It would be their last lead of the game.

Capped by a layup from Beatty, A&T outscored Presbyterian 13-4 over the next five minutes to take its largest lead of the game at 47-38 with 12:07 to play. From there, Presbyterian played from behind, pulling to within four points twice around the three-minute mark but never threatening to take the lead. The Blue Hose made just 8 of 27 shots (27.6%) in the second half.

Horton added 12 second-half points to finish with a game- and season-high 26 points. He was a scorching 10 of 13 from the field including 2 of 3 from behind the arc. He also led the Aggies with three assists Watson finished with 16 points and a game-high 11 rebounds. Watson (12.4 ppg.) and Horton (11.5O are A&T’s top scorers.

Beatty, playing at the point for starter Kam Langley and back-up Kyle Duke – both out because of health and safety protocols – had ten points and six boards. A transfer off-guard from LaSalle who also played at South Carolina, he had just two turnovers in over 38 minutes on the court.

Hill led the Blue Hose with 19 points while Trevon Reddish-Rhone finished with 10.

Up next for NC A&T

Barring any COVID-related interruptions, the Aggies play next in the Big South on the road Saturday (Jan. 8) at Radford before returning home next Wednesday (Jan. 12) to face former MEAC rival Hampton for the first time with both as members of the Big South.

“That’s a huge win for us,” said Jones of getting the job done despite missing those players. “It should give us a lot of confidence when we get back to full-strength, that we can win games night-in and night-out in this league.”