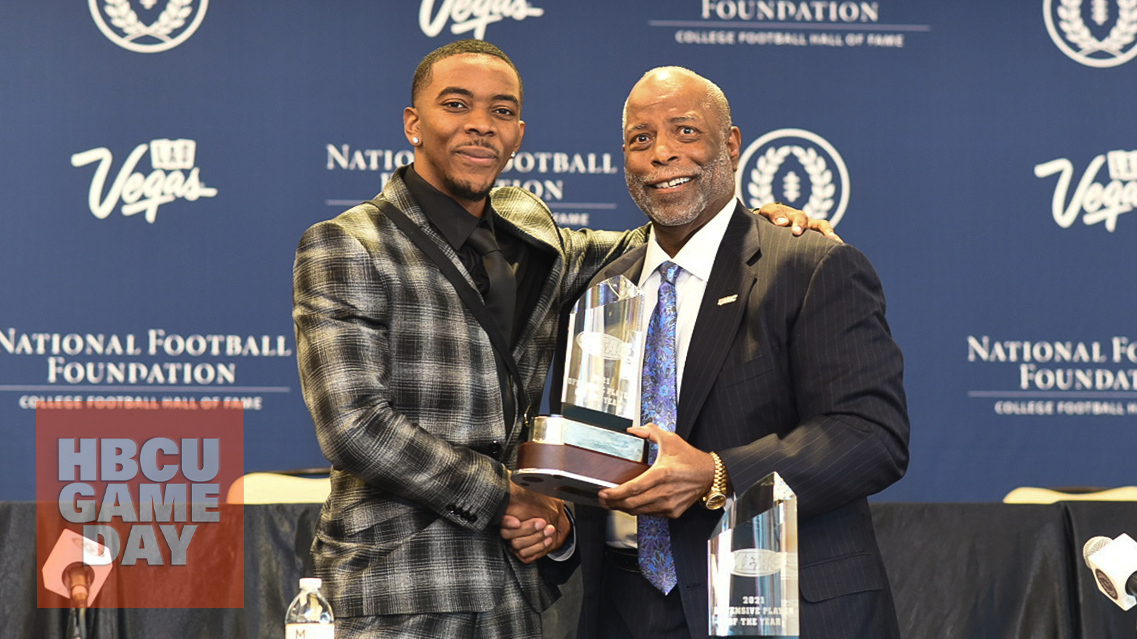 Juwan Carter cemented his legacy by staying after coaching change

Juwan Carter committed to Norfolk State back in 2016. He stuck with the program and left his mark on it. That doesn’t happen quite as much as it used to.

This is a big week for Juwan Carter. He will graduate from Norfolk State University with a degree in sociology on Saturday. On this Tuesday morning, however, he’s in Las Vegas accepting the MEAC Offensive Player of The Year award.

Carter was presented with the award as part of the National Football Foundation Convention. He and South Carolina State defensive back Dacobie Durant were flown to Vegas by the conference, where they were treated to a tour of  Allegiant Stadium as well as a host of other opportunities.

It’s fitting that the senior would have to travel far to get his award. It’s been a long journey filled with ups and downs for the Richmond, VA native.

NSU pursued Carter early and it payed off

Carter committed to NSU prior to his senior season at Highland Springs High School back in 2016. NSU was the first school to offer him under former head coach Latrell Scott.

By the time Carter finished his junior campaign in 2019, he was on the cusp of breaking many of the records of NSU’s legendary Aaron Sparrow. The team looked to be on the rise and ready to compete for a title in 2020. Then COVID-19 happened, causing the MEAC to suspend both the fall season and its hopes for a spring season. Then Scott took a job at East Carolina. Carter and many of his other teammates pondered their future as the future of the program was in doubt.

The transfer portal was wide open this spring, and Carter could have taken that route. Caylin Newton —  a member of the 2017 recruiting class who received the accolades early on in their careers — did so during the Ron Prince debacle at Howard back in 2019. But ultimately Carter stayed put.

Melody Webb, Norfolk State’s newly appointed Director of Athletics, brought in Dawson Odums to take over the program. The SWAC champion and respected coach had the tough task of getting hired in April to take over a football team that would play its first football game in nearly 20 months not long afterward.

“Well, the biggest thing is; know what you’re inheriting,” Odums said of taking over at NSU. “I think sometimes we make critical decisions before we even know the lay of the land.”

What Odums saw was an offense that was already pretty good, led by a quarterback who had tools on and off the field.

“He’s done an outstanding job, but it’s not on the field or I’m always looking for accolades,” Odums said. “I’m always looking at the growth of the man And I think for the six months that I’ve had a chance to be around him, you see tremendous growth for him to become a great father, a great husband and a great servant to the community.”

Odums came in and earned the respect of Carter and his team and began to add his philosophy to NSU’s talent.

“You know, when he came in, a lot of people didn’t know what he was capable of,” Carter said. He has a winning record wherever he goes. So obviously he’s a winner. But when he got there was just one thing he brought in — that’s discipline.”

When Carter talks about the season you can almost literally see the thoughts of what might have been. After playing FBS programs to start the season, NSU went on a six-game winning streak, the best the school has had as a Division I program. But back-to-back losses to NC Central and Delaware State after being up by 20-plus points took the MEAC title off the board.

“If he would have been there in the spring when Coach Scott left, I feel like it probably would have been a better outcome of the season, even though we still had a winning record, but he’s a he’s a heck of a coach and shoutout to him.”

Carter leaves big shoes to fill behind him at NSU. He’s the school’s all-time leader in passing completions, yardage and touchdowns — as well as several others.

Odums says players like Carter are irreplaceable and that, as a coach, you hope to find other talented players to push the program forward.

“He set the bar really high,” Odums said. “But we all know that records are meant to be broken. Somebody will come through in that line ready to chase that record and achieve success.”

Juwan Carter has played his last game in the green and gold — but his story isn’t over. Next up is a trip back to Virginia to get his hard-earned degree. It’s coming a little later than he planned, but Carter has learned that some good things take time.

“You know, timing is everything, and I just feel like graduating with my sociology major, I’m going to be able to help kids with mental health issues. I’m a quarterback and you’ve got to be a social person and you have to be able to be a leader. And that just helps me off the field dealing with problems, you know, just dealing with people.”

A budding father, Carter will also look to show pro scouts what he can do to see if a pro career in football is on the horizon.

“I’m going to be playing an HBCU legacy bowl, so I will be training all the way up to that point,” Carter said. “And if they find me, they find me, you know, I’m just going to just keep trying and keep working.”

No matter what happens with that endeavor, Juwan Carter will leave NSU with a degree and a legacy. And a nice trip to Las Vegas.

Juwan Carter cemented his legacy by staying after coaching change