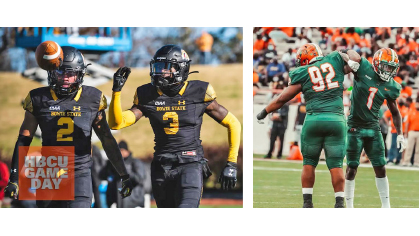 Bowie State will be looking to advance to the regional finals (the Elite Eight) for the first time in its history Saturday in a second round NCAA Div. II match up. Florida A&M enters the FCS playoffs in its first year in the SWAC.

Here’s where we stand as we enter Week 13 of the HBCU Football Rundown. Five games are on the docket, two of the playoff variety.

CIAA champion Bowie State plays in the second round of the NCAA Div. II playoffs this week while Florida A&M gets started in the FCS playoffs.

One half of the Dec. 18 Celebration Bowl is in as South Carolina State clinched the Mid Eastern Athletic Conference title and berth in the game vs. the SWAC champion.

That game’s winner will head to Atlanta to meet S. C. State in the season-ending bowl game.

McGhee had posted nine games of over 100 rushing yards and two with over 200 rushing yards. The Bulldogs’ defense held him to 71 yards on 23 carries. LRU put up over 400 yards of offense including 343 passing yards but only reached paydirt once.

Bowie State is now one of 16 teams left in the NCAA Div. II Championship field.

The Bulldogs (11-1), the No. 2 seed in Super Region II, will now face South Atlantic Conference champion Newberry (10-2) in the regional semifinal. The Wolves are seeded sixth in the region and knocked off third-seed West Florida in the first round, 33-30 in overtime. West Florida (9-2) was the defending Div. II national champion.

BSU and Newberry have one common opponent, Lenoir-Rhyne. Newberry beat LRU 28-21 on Sept. 18 in their head-to-head match up.

This will be Bowie State and 11th-year head coach Damon Wilson’s second time in the region semifinals. They reached the semis in 2018 after beating West Alabama 41-35 in the first round but were knocked off 66-16 by eventual Div. II national champion Valdosta State.

Newberry will feature another all-SAC running back in sophomore Marlo Anderson who has rushed for 1,158 yards and 11 TDs. Senior quarterback Dre Harris has passed for 2,272 yards and 18 TDs with eight interceptions. Harris is also the team’s second leading rusher having piled up 420 yards on the ground and seven TDs. When he takes to the air, Harris has a talented tandem in senior Bryson Woodruff (60 rec., 893 yds., 9 TDs) and grad Bobby Irby (43 rec., 696 yds., 7 TDs). Woodruff was also first team all-SAC.

BSU quarterback Ja’rome Johnson rushed for 147 yards on just 12 carries vs. LRU. For the season he has passed for 1,826 yards and 20 TDs with just eight interceptions. Johnson has also rushed for 448 yards and another eight TDs.

Running back Calil Wilkins led the CIAA with 1,257 rushing yards. He has rushed for nine TDs. Keshan Hinckley and Darius Bowman have topped the receivers with 24 catches and two TDs each.

The quick and agile BSU defense gives up just 12.9 points per game, sixth best in all of Div. II. It is led by all-CIAA linemen Jonathan Ross and Joshua Pryor who have combined for 167 tackles and 15 sacks.

Head coach Willie Simmons and the Rattlers of Florida A&M, in their first year in the Southwestern Athletic Conference (SWAC), got the league’s first at-large berth to the FCS playoffs since the league went to its championship game format in 1999.

The 9-2 Rattlers, playing in the SWAC East Division, earned the bid to the 24-team FCS playoff field by virtue of only losing on the FCS level to SWAC East champion Jackson State 7-6 to open the season. JSU (10-1), under the leadership of head coach Deion “Coach Prime” Sanders, was 14th in the last AFCA FCS Coaches poll. FAMU was 22nd. FAMU’s other loss was 38-17 to FBS member South Florida on Sept. 18.

The task before the Rattlers

The Rattlers will have a tough task on the road Saturday in the first round in Hammond, La. (6 p.m. CT) facing Southeastern Louisiana (8-3). The high-scoring Lions under fourth-year head coach Frank Scelfo, finished second in the Southland Conference at 6-2 to champion Incarnate Word (9-2, 7-1).  SELU lost to Incarnate Word, 55-52 on Nov. 6. They also lost at FBS member Louisiana Tech 45-42 on Sept. 11 and 45-42 to Nicholls out of the Southland Conference on Nov. 18.

SE Louisiana averages 48 points per game, tops in the FCS, and gives up 32 points per contest. The Lions have scored over 50 points in six contests, over 60 points in one game and have not tallied below 23 points on the season.

They are led by reigning Walter Payton Award winner, senior quarterback Cole Kelley. Kelley finished the 2021 spring season with 18 passing touchdowns, 2,662 passing yards and a combined quarterback rating (QBR) of 159.02. He added 7 rushing touchdowns and 2 receiving touchdowns to his 2021 tally.

The Rattlers will have to put plenty of pressure on Kelley to slow him down. The FAMU defense gave up just 15.1 points per game, eighth best in the FCS. The Rattlers are led by quick, 6-4, 215-pound linebacker Isaiah Land who led the FCS with 19 sacks. FAMU registered 38 sacks on the season, second in the SWAC to Jackson State’s 48.

“We’re going against the No. 1 offense in the FCS and we’re the No. 1 defense, so we feel it’s going to be a big test,” Land told Rory Sharrock of the Tallahassee Democrat. “Defense wins championships, so its going to help us in the playoffs to see what we’re made of.”

Safety Markquese Bell leads the team with 55 solo tackles and 79 tackles overall. He is the 6-3, 205-pound hard-hitter on the back end of the Rattlers’ defense. Junior DB B. J. Bohler leads the Rattlers with four interceptions and nine pass-breakups.