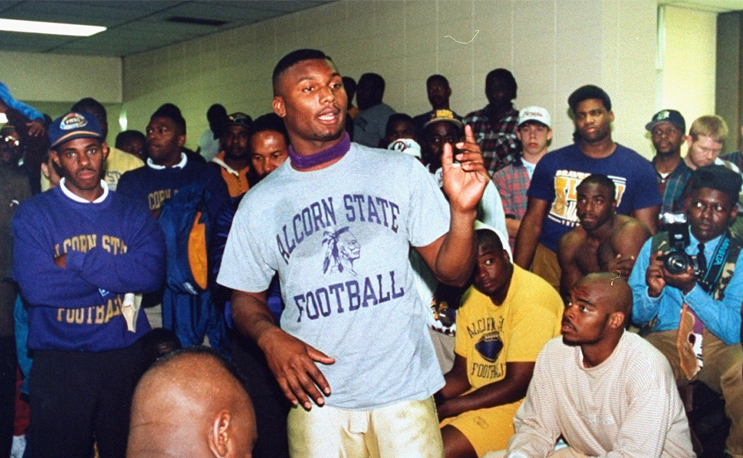 Steve McNair to be honored at Alcorn State by College HOF

IRVING, Texas (Nov. 9, 2021) – Alcorn State University and The National Football Foundation (NFF) & College Hall of Fame announced today that they will posthumously honor 2020 College Football Hall of Fame electee Steve McNair with an NFF Hall of Fame On-Campus Salute, presented by Fidelity Investments. The Salute will take place this Saturday, Nov. 13, during the Braves’ home football game against Prairie View A&M. Coverage of the game will start at 2 p.m. CT.

The NFF Hall of Fame On-Campus Salute program, which began with the inaugural College Football Hall of Fame Class in 1951, has become a hallowed tradition, and to this day the singular events remain the first of numerous activities in the Hall of Fame experience.

During the NFF Hall of Fame On-Campus Salutes, each electee returns to his respective school to accept a Hall of Fame plaque that will stay on permanent display at the institution. The events take place on the field during a home game, and many Hall of Famers cite the experience as the ultimate capstone to their careers, providing them one more chance to take the field and be recognized in front of their home crowd.

The 2020 and 2021 College Football Hall of Fame Classes will be officially inducted during the 63rd NFF Annual Awards Dinner Presented by Las Vegas Dec. 7 at the ARIA Resort & Casino Las Vegas. (The 2020 event was canceled due to COVID-19.)

“Arguably the greatest player in Alcorn State history, Steve McNair rewrote the FCS record books during his standout career,” said NFF President & CEO Steve Hatchell. “He is truly missed, and we are thrilled to pay tribute to his legacy at Jack Spinks Stadium.”

A 1994 First Team All-American, McNair took home the Walter Payton Award as the best player in the FCS while finishing third for the Heisman Trophy, which is tied for the highest finish ever by an FCS player. The 1994 Eddie Robinson Trophy recipient as the nation’s best HBCU player, he remains the all-time total yards leader in FCS history with 16,823, and his 14,496 passing yards were a national record until 2018.

The only four-time SWAC Offensive Player of the Year in history, McNair led Alcorn State to conference titles and FCS Playoff berths in 1992 and 1994. Those same two seasons, the four-time First Team All-SWAC selection led the nation in total offense with 4,057 yards in 1992 and an FCS single-season record 5,799 in 1994.

The 1991 SWAC Freshman of the Year also ranks third in school history with 2,327 rushing yards. The two-time Dean’s Scholar is enshrined in the SWAC, Black College Football, State of Mississippi Sports and State of Tennessee Sports halls of fame.

The third overall pick in the 1995 NFL Draft by the Houston Oilers, McNair played for the Oilers/Tennessee Titans from 1995-2005 and led the franchise to a berth in Super Bowl XXXIV. The three-time Pro Bowler and 2003 NFL Co-MVP finished his pro career with the Baltimore Ravens from 2006-07. McNair is a member of the Titans/Oilers Hall of Fame, and the franchise retired his No. 9 jersey in 2019.

McNair left a lasting impact in the community through the Steve McNair Foundation, which served underprivileged youth through education and civic opportunities and raised more than $1 million for charities. He organized a highly successful relief drive following Hurricane Katrina, and he trained thousands of kids at youth football camps, covering the costs for nearly 70% of the attendees.

Steve McNair received multiple awards for his work in the community, including the NFLPA’s Byron “Whizzer” White Award. He died on July 4, 2009, at the age of 36.

“Air McNair” deservedly becomes the first Braves player to enter the College Football Hall of Fame. He joins Coach Marino Casem, who led Alcorn State from 1964-85, as the only two inductees from the university.

The accomplishments of both classes will be forever immortalized at the Chick-fil-A College Football Hall of Fame in Atlanta, and each inductee will receive a custom ring created by Jostens, the official and exclusive supplier of NFF rings.

Including the 2020 and 2021 Hall of Fame Classes, only 1,038 players and 223 coaches have been inducted into the College Football Hall of Fame from the nearly 5.47 million who have played or coached the game during the past 152 years. In other words, less than two one-hundredths of a percent (.02%) of the individuals who have played the game have earned this distinction.

Steve McNair to be honored at Alcorn State by College HOF