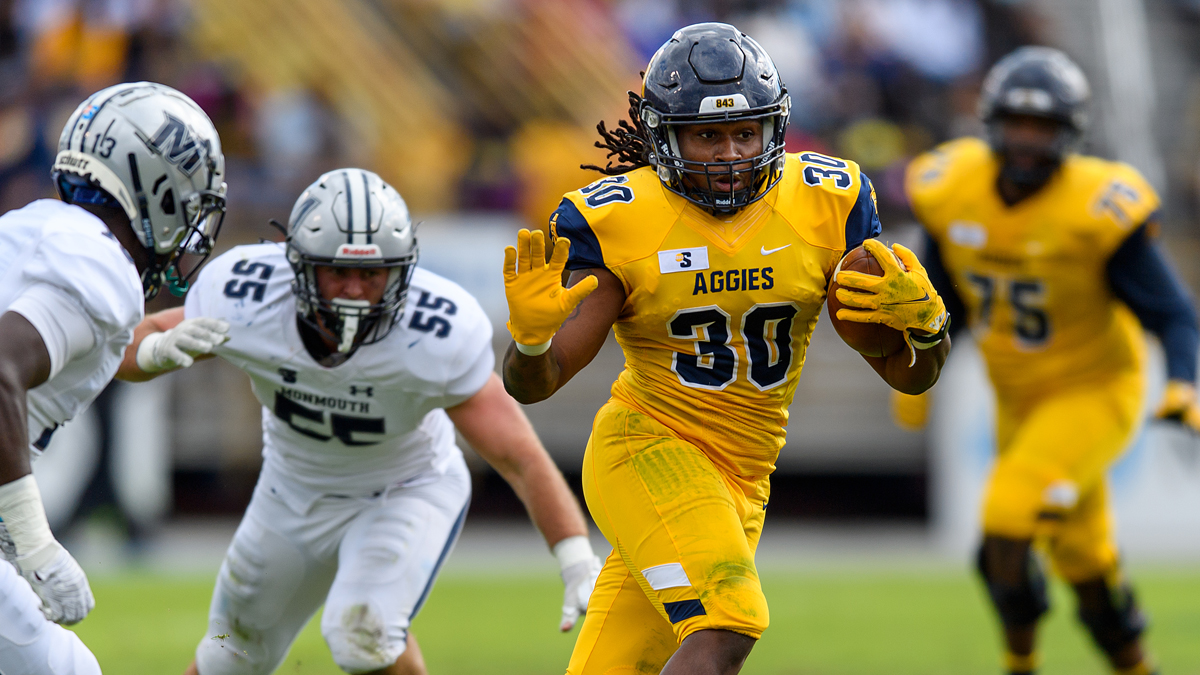 Monmouth too much for NC A&T at GHOE

North Carolina A&T is having a tough time in its first trip through its new league, the Big South Conference.

Coming off two straight losses in league play, A&T welcomed two-time champion Monmouth in hoping that a sellout homecoming crowd (21,500) and a re-focused team could get things headed in the right direction. It turns that was last thing the home team needed.

The mistake-free Hawks built an early lead and survived a determined Aggie surge before halftime to shut them out in the second half and come away with a 35-16 win. It was the third straight Big South game in which the Aggies posted a scoreless second half.

“Tough day. It’s difficult to come and share with you guys,” NC A&T head coach Sam Washington said in his postgame comments. “I’m not as disappointed as last week (a 30-9 loss at Hampton) because at least this week we fought for a half. We played with some effort and some desire.

“In the second half that energy just died. We made mistakes that good teams don’t make. There’s no excuse for that. We needed a spark, on offense or defense, and we just didn’t get it,” Washington said.

Monmouth (5-3, 4-0) put together four drives in the game of 75 yards or more and overcame eight sacks to pull out the win. The only turnover the Hawks had in the game was a bad snap from scrimmage deep in their own territory that led to an A&T second-quarter safety.

Other than that, QB Tony Muskett (19-28-0, 246 yards, 2 TDs) and the Monmouth (5-3, 4-0) offense was flawless. The Aggies committed 12 penalties for 98 yards, a couple of them dead-ball roughing penalties that kept Monmouth drives alive or extended them.

“That’s just not winning football,” Washington said. “We have to get that cleaned up and get back t playing Aggie football.”

Monmouth built a 14-0 lead early and led as much as 21-7 before the Aggies cut the halftime lead to 21-16 based on two second quarter touchdowns.

Monmouth scored the only third quarter score on a Muskett 1-yard run. Muskett went in again from 2 yards out for the final score with 5:18 left in the game.

NC A&T star running back Jah-Maine Martin had his most productive game of the season. The senior ran over and around defenders, showcasing his power and speed that had been absent in the Aggies’ first seven games. Martin finished with 97 rushing yards on 16 carries and scored the first A&T touchdown of the first play of the second quarter. That score cut the lead to 14-7.

NC A&T QB Jalen Fowler hit on 18 of 28 passes for 215 yards and one TD. Taymon Cook had five receptions for 53 yards. Linebacker Jacob Roberts had DE Devin Harrell each had two sacks.

Lonnie Moore led the Hawks with five receptions for 100 yards and one TD.

Monmouth scored first after A&T muffed a punt in its own territory. After that 17-yard loss, the Hawks drove 37 yards in five plays and scored as Muskett hit Joey Aldarelli on a 5-yard pass with 8:37 left in the first quarter.

On its next possession, Monmouth drove 81 yards in eight plays to score on a 29-yard pass from Muskett to Lonnie Moore. The PAT put the Hawks up 14-0 with 1:35 left in the period.

In the first scoring drive for the Aggies, Martin had a 27-yard run and QB Jalen Fowler hit WR Ron Hunt on a 19-yard pass reception.

Chowan answered that score with a 15-play, 75-yard drive that took up just under six minutes and was capped by Jaden Shirden’s 4-yard TD run. Monmouth led 21-7 with 9:10 left after the PAT.

After the aforementioned safety, the Aggies received the ensuing kickoff and drove 56 yards in seven plays to score on a nifty 4-yard pass from Fowler to tight end Nick Dobson. They got the ball back one more time and penetrated to the Hawks’ 30 before the halftime clock ran out.

Fowler was 8-for-12 for 110 yards without a pick in the first half. Martin ran 10 times for 65 yards. Taymon Cooke had 3 catches for 43 yards to lead the receivers.

Muskett was 13 of 18 for 133 yards but was sacked six times. Those sacks reduced Monmouth’s first-half rushing stats to 23 yards on 19 carries.

Monmouth too much for NC A&T at GHOE