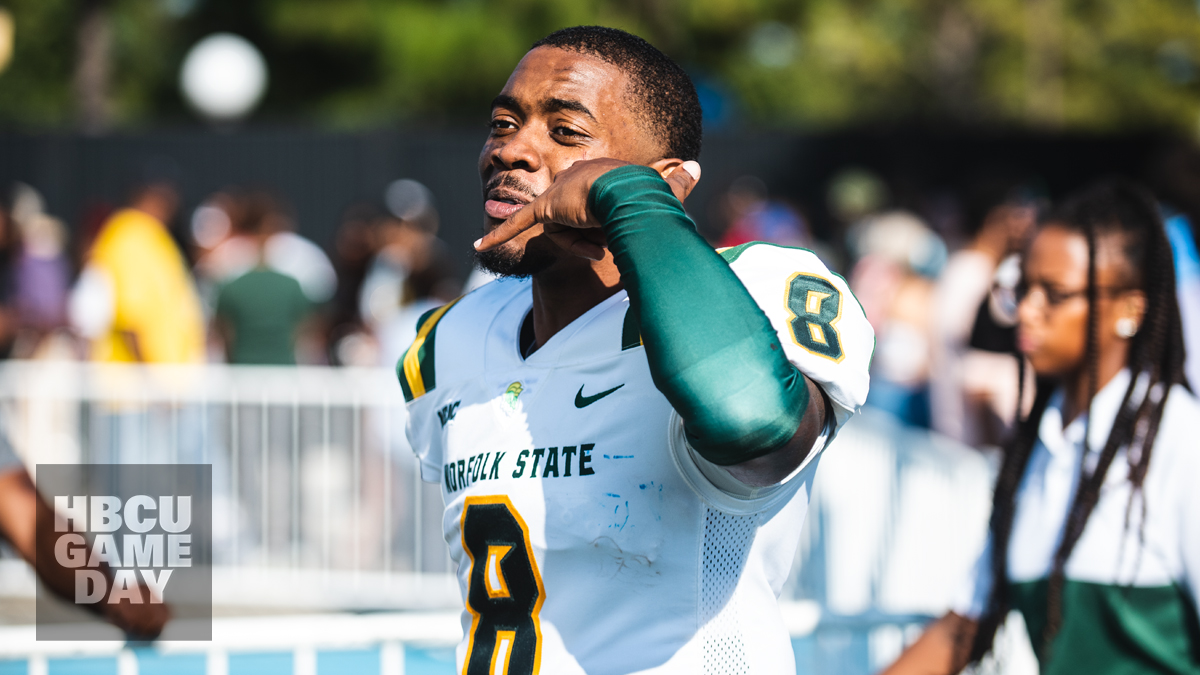 WASHINGTON, D.C. – Juwan Carter broke the school record for consecutive completions on the way to a 332-yard day passing and Cameryn Brent rushed for two touchdowns, including the clinching score with less than two minutes left, as Norfolk State won its fifth straight game, 45-31, over Howard on Saturday at Greene Stadium.

Carter completed 26 of 29 passes and one score to carry the Spartans (5-2, 1-0 MEAC) to their fifth win in a row, their longest winning streak since 2011. He completed a school-record 21 straight passes at one point. Brent rushed 10 times for 99 yards and two TDs, both in the fourth quarter. His 57-yard scoring burst with 1:33 remaining helped finish off the Bison (2-5, 1-1), who had gotten within seven after trailing 28-3 in the third quarter.

Norfolk State scored the game’s first 14 points. Redshirt freshman wideout Da’Quan Felton caught his first career TD, a 7-yarder from Carter, with 1:53 left in the first quarter. NSU scored its second touchdown when offensive lineman Jeff Woods fell on Carter’s fumble in the end zone at the 11:41 mark of the second quarter, increasing NSU’s lead to 14-0.

Faraji Woodson kicked a 38-yard field goal for the Bison’s only points of the first half with 59 seconds remaining in the second quarter. NSU picked off a pair of passes by HU quarterback Quinton Williams in the half, one each by Tayvion Land and Justin Toler, both in NSU territory.

Kevin Johnson’s 2-yard TD run capped the Spartans’ first drive of the third quarter, a six-play, 76-yard march that put NSU up 21-3. After forcing a Bison punt on the ensuing drive, Stuart Anderson blocked the punt and Christian Ruffin scooped it up and returned the loose ball 4 yards for a score. Josh Nardone’s PAT extended the NSU lead to 28-3 with 10:49 left in the third.

But the Bison did not go away. Williams scored on a 1-year sneak in the third quarter. After NSU’s Josh Nardone 31-yard field goal early at the 13:31 mark of the fourth, Howard’s Ian Wheeler scored on a 96-yard kickoff return for the Bison just 14 seconds later.

Norfolk State then fumbled on its next drive, and Wheeler capped the next possession with an 18-yard run to bring the Bison within 31-24 with 10:50 left.

The Spartans had the answer in the form of an eight-play, 80-yard drive, which Brent capped with a 3-yard run. But Howard again responded, this time with a 31-yard TD pass from Williams to Matthew McDonald to bring the Bison within 38-31 with 4:26 remaining.

The Spartans then set to run out the clock. After gaining one first down, the Spartans put the game on ice when Brent burst through the middle of the line and outraced the defense for a 57-yard TD run with 1:33 left. It was the longest run of Brent’s Spartan career and pushed the Spartans over the 40-point mark for the third straight game.

NSU finished with 535 yards of total offense, 203 rushing and 332 through the air. Carter completed passes to 10 different wide receivers en route to his second 300-yard passing day of the year. Justin Smith was his favorite target – Smith tallied career highs with seven receptions for 147 yards.

Carter’s 89.7 percent completion rate Saturday is the second-best in school history, trailing only Chris Walley’s 90.9 (20-of-22) set against Morgan State in 2010.

The Spartans are back home next Saturday for a 2 p.m. game against Morgan State on Breast Cancer Awareness Day.