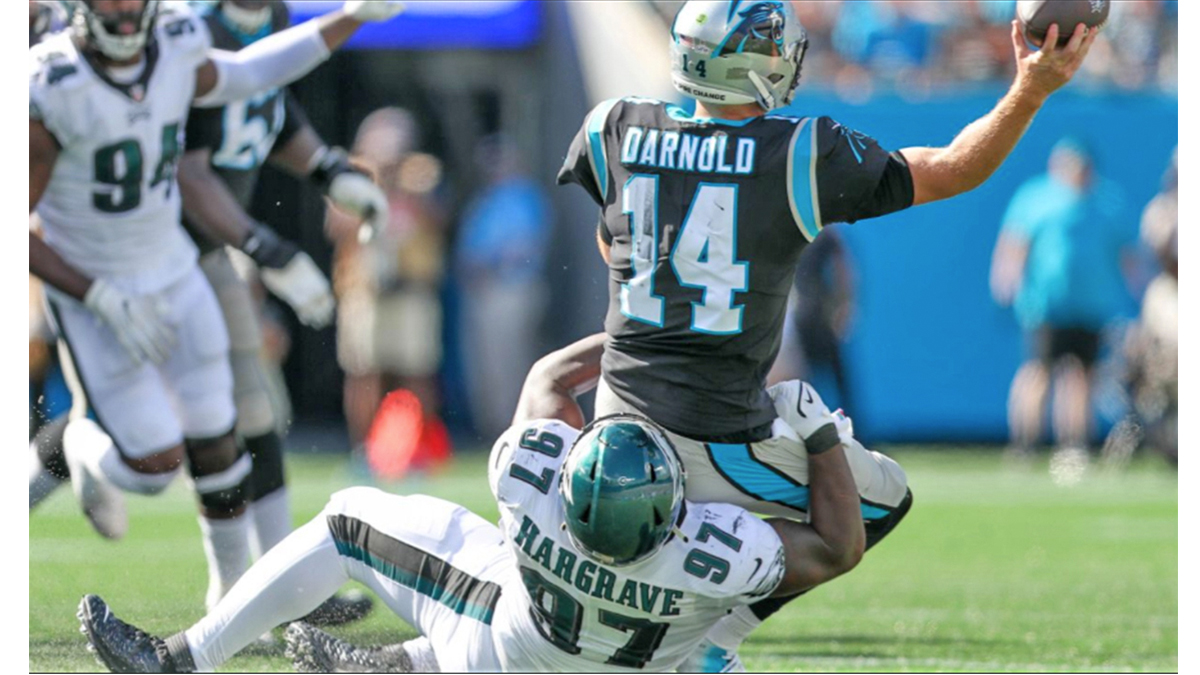 Philadelphia’s Javon Hargrave had his sixth sack of the season and was one of three former SC State products who stood out this week in the NFL. See the list of the top HBCU players from Week 5 of the NFL season here.

Two-time all-pro linebacker Darius Leonard sweated through all 73 defensive plays for the Colts Monday. The effort was great but Indy came up on the short end of a disappointing 31-25 overtime loss at Baltimore. Leonard led Indy with 13 tackles, seven solos and a goal-line fumble recovery.

He returned the fumble 21 yards before lateraling to Isaiah Rodgers who returned it for a touchdown. After an officials’ review, it was determined Leonard’s lateral was a forward lateral and the play was brought back.

Leonard repeats as the HBCU NFL Defensive Player of the Week.

Outstanding former South Carolina State defensive lineman Javon Hargrave continued his outstanding play for the Philadelphia Eagles this week. Hargrave took down Carolina QB Sam Darnold for his sixth sack of the season in a 21-18 Eagles’ win. He also had another hit on Darnold along with three tackles.

Hargrave’s six sacks are fourth in the NFL. He has become a dominant pass rusher – his forte at SC State – in his sixth season in the league. He is well on his way to an all-pro season. Hargave and Leonard were two-time winners of the MEAC’s defensive player of the year award while at SC State.

Arizona DB Antonio Hamilton, also out of SCSU, started and played extended minutes in a win over San Francisco Sunday. Hamilton posted six tackles while getting in on 97% of the undefeated Cardinals’ defensive plays in a 17-10 win.

– #80 CHESTER ROGERS, WR, Tennessee (5th season, GRAMBLING STATE) – In the Titans’ 37-19 win over Jacksonville, Rogers had one catch for 26 yards in his only target and one carry for nine yards. He did not return a punt or kickoff. He was in on 31 offensive plays (48%) and two special teams’ plays (8%).

– #97 JAVON HARGRAVE, DT, Philadelphia (6th season, SOUTH CAROLINA STATE) – In 21-18 win over Carolina, Hargrave had three total tackles, one solo, a sack for -9 yards and another hit on the quarterback. He got in on 49 plays on defense (69%) and two plays on special teams (6%). Hargrave now has six sacks on the season in five games.

– #33 ANTONIO HAMILTON, DB, Arizona (6th season, SOUTH CAROLINA STATE) –  In 17-10 win over the San Francisco 49ers, Hamilton started at cornerback and had six tackles, four solos. and one assisted tackle. In his most extensive action of the season, he logged 63 plays on defense (97%). He was also in on two plays on special teams (11%).