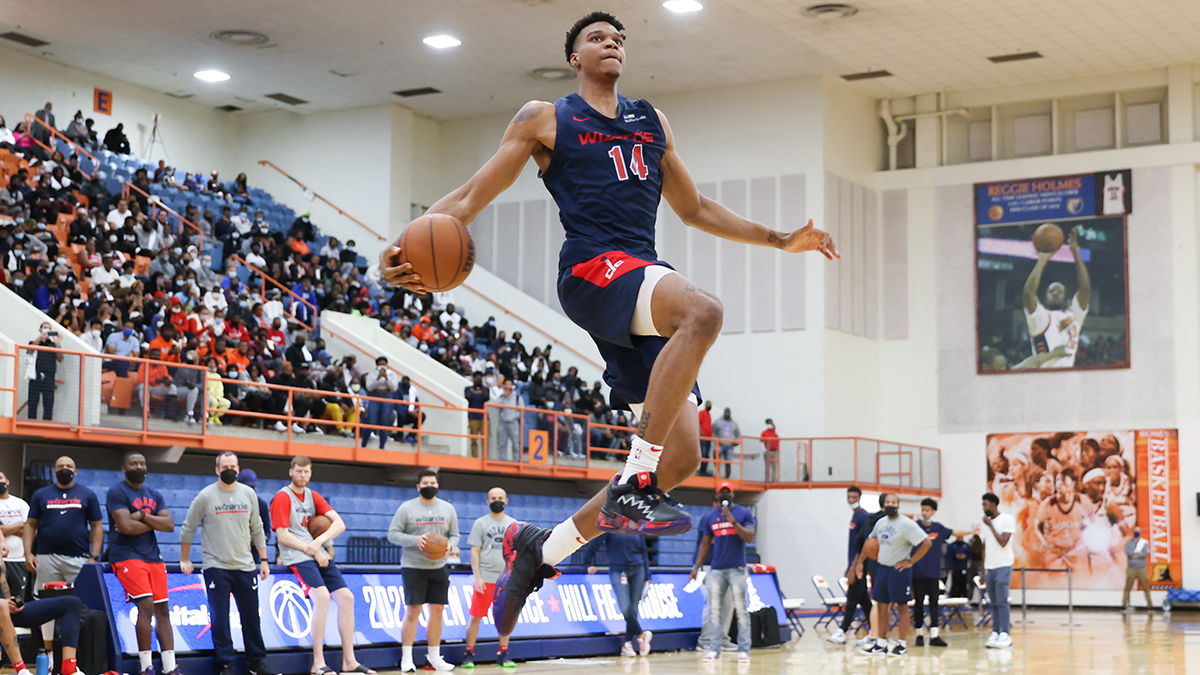 The Washington Wizards held an open practice in Baltimore at Morgan State University on Monday.

On Monday morning at Morgan State University’s Hill Field House, the Wizards held their annual Open Practice, presented by Capital One. Wizards fans, as well as Morgan State students and faculty, gathered to take in the event, which included a full-court scrimmage, 3-point contest, dunk contest, half-court shooting contest, a performance from the Wizards Dancers and more.

The entire roster and coaching staff was on-hand for the event and before the festivities began, Wizards rookie and Baltimore native Isaiah Todd addressed the crowd.

“It feels good to be home,” Todd said. “I haven’t been here in years and you gave me a warm welcome.”

“Basketball was pretty much my life growing up here,” Todd said after practice. “It’s installed character in me since the time I started school. It’s been something I’ve been carrying with me since I left Baltimore.

One of the first events of the day was the dunk contest, featuring Todd and centers Daniel Gafford and Jay Huff. Each put down impressive slams on their first attempts. The winner was determined by the loudest round of applause from the fans. Todd, leaning on some hometown support, was declared the champion.

Todd’s cousin, Reggie Holmes, finished his time at Morgan State as the school’s all-time leading scorer – and now has a banner hanging inside the same gym Todd and the Wizards practiced on Monday.

“Walking in here and seeing my cousin as the leading scorer at a University here – that just means something special,” Todd said. “For me to be able to carry that out and play for the Wizards and come back – that’s a story. That’s beautiful.”

“These are enjoyable (events),” Unseld Jr. said. “You get an opportunity to kind of reach out to the community and give back to some degree. But it’s still a work day. We’re splitting time and accomplishing two things.”

The Wizards’ selection of Morgan State, located in downtown Baltimore, as its location for this year’s open practice came with a special meaning. As the NBA celebrates its 75th anniversary season, the organization chose to return to the city where it played in the 60s and early 70s.

“We were very excited when we heard about the opportunity, especially with the connection that our community was going to be able to make with the Wizards,” said Andreina Rosario, Morgan State’s director of marketing and fan engagement. “We have a very young audience here and it makes us all very happy. Building that connection with fans who aren’t familiar with the Wizards’ history in Baltimore. That’s definitely a big deal for us.”

Monday’s open practice also marked the first time the team has held the event at a Historically Black College and University.

“You can’t say enough about it,” Unseld Jr. said. “They get overlooked, so any time you can put the spotlight on HBCUs, I think it’s a great opportunity.”

“Understanding the climate of HBCUs in today’s world, appreciating the seriousness and the commitment that everyone is making toward recognizing them, building them up and getting kids going to their schools and programs (is important),” Bradley Beal said after practice. “For us to be here means a lot…It’s good for out community and good for the team.”