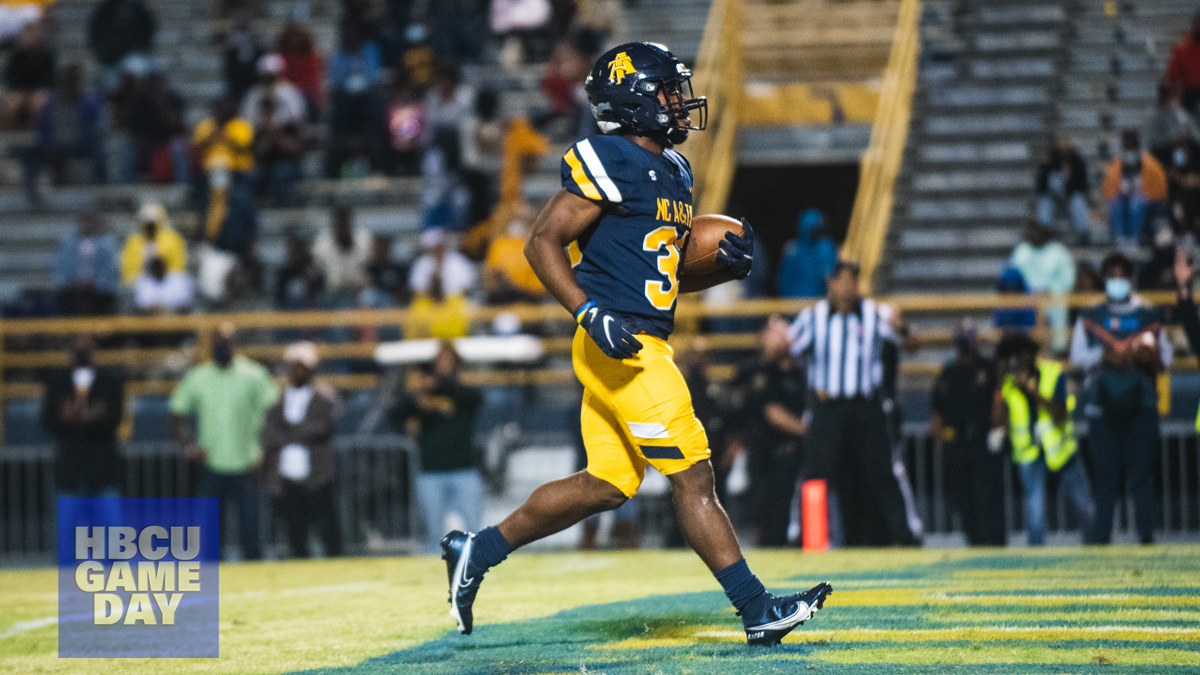 North Carolina A&T made it harder than it had to be, but did what it had to do to improve to 2-0 in Big South play.

GREENSBORO, NC – NC A&T made a boring game interesting here Saturday squandering a 17-point halftime lead before a pair of freshmen came to the rescue and helped the Aggies pull out a tense 38-34 Big South Conference home win over North Alabama.

Quarterback Jalen Fowler and running back Jah-Maine Martin committed early third quarter turnovers after the Aggies had gone into the break with a big 24-7 lead. UNA cashed in. When the quarter was over, the Lions (0-6, 0-2 Big South) trailed only 31-28.

A UNA four-yard touchdown pass from QB Rett Files to Nick Hayes with 6:47 left in the final quarter put the Lions up 34-31 for the first time since a 7-3 lead early in the game and things really got tense. But talented freshman running back Bhayshul Tuten wound his way through a phalanx of UNA defenders to score on a 60-yard swing pass just two plays later.

Beleaguered redshirt freshman defensive back Herbert Booker, who had suffered four pass interference penalties earlier in the game, then sealed it for the Aggies with an interception of Files after UNA drove deep into Aggie territory with 1:37 to play.

But UNA had all of its timeouts and used them as the Aggies faced a 3rd-and-10 at their own 15 with 1:29 left. On the play, Fowler’s pass to slot receiver Korey Banks was broken up but UNA’s Evan Jones was called for pass interference giving the Aggies a first down. Fowler was able to kneel down three times to end the game.

It was a game marred by penalties, particularly of the pass interference variety. The teams combined for 236 yards in infractions with A&T committing 12 for 127 yards and UNA getting 10 for 109.

“We came into the game telling the players this was going to be a tough ballgame,” said a relieved NC A&T head coach Sam Washington at the postgame press conference. “We told them not to look at their (winless) record. It was no indication of the caliber of play that this team is capable of. I hoped it sunk in. But they believe me now.

“We wanted to start fast and finish strong,” Washington said. “I thought we did well with the first piece of that. It’s after the half that we had those two big turnovers. That turned everything around. We sort of got on our heels at that point.

“But I’m very proud of these guys and their resolve and their willingness to keep fighting. They hung in there and finished the game.”

The Aggies led 24-7 at the half and appeared on the way to their second blowout win in their new conference in as many weeks before the tables turned, or more accurately, they became turnover prone.

On the second play of the third quarter, Fowler threw an interception. Eight plays later, UNA’s Dexter Boykin hauled in a 14-yard scoring pass from Files to pull the Lions within 24-14.

Three plays after the kickoff, Martin coughed up the ball with UNA recovering at the Aggies 15. On the second play following an unsportsmanlike penalty on UNA, RB Parker Driggers went down the left sideline for 30 yards and a score. Not even half of the third quarter had elapsed and UNA had made a game of it, pulling within 24-21.

NC A&T briefly answered and extended the lead to 31-21 as Kashon Baker scored on a weaving 15-yard run at the end of a 10-play, 75-yard drive with 3:30 left in the period.  But UNA came right back, covering 84 yards in seven plays in just over two minutes with Driggers scoring this time on an 18-yard run. With 1:03 left in the third quarter, UNA trailed 31-28 setting up the last quarter drama.

For the game, the Aggies rushed for 200 yards led by 80 yards on 19 carries by Martin. Tuten finished with 166 total yards including 60 rushing yards on six carries, his 60-yard scoring reception and 46 yards in returns. Fowler completed 14 of 20 passes for 243 yards and three TDs with the one pick. Kashon Baker had three receptions for 42 yards while Elijah Bowick had two for 58 yards.

The Aggies put up 301 of their 443 total yards in the first half as they scored on all but one first half possession in running out to the 24-7 lead.

The Lions needed just three plays to take a 7-3 lead, scoring on a 61-yard TD pass from Files to Dexter Boykin at the 6:18 mark of the quarter.

Fowler added two TD passes covering 29 yards on a wheel route to Kashon Baker in the first quarter and 28 yards to wideout Zach Leslie to open the second quarter scoring. Tuten capped the first-half scoring going in from four yards out with 4:54 left in the half.