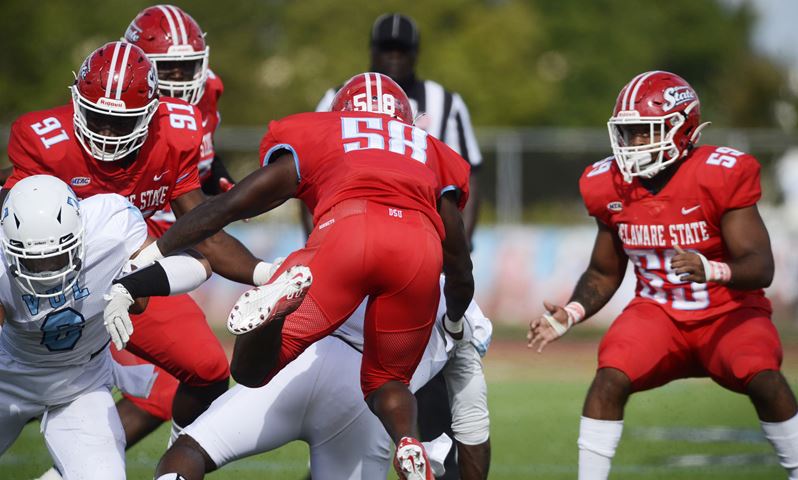 Delaware State started slow against Virginia-Lynchburg before exploding in a record-breaking second quarter.

(DOVER)- Delaware State Hornets (3-3, 0-0) showed up ready to play on Saturday against the NCCAA-member Virginia Lynchburg Dragons (0-6, 0-0) scoring 42 points in the second quarter of a 56-6 blowout victory.

Hornets quarterback Jared Lewis threw for two touchdowns; one to Senior wideout Trey Gross and the other pass was for the six-foot six sophomore wideout Bizzett Woodley. Delaware State kept the pedal to the metal scoring the bulk of their points in the second quarter.

The fireworks began on the first play of the second quarter when freshman Sy’Veon Wilkerson came off the bench to seal off a seven play, 53-yard drive with a 7-yard touchdown rush. The drive was sparked by rushes of 19 and 16 yards from Wilkerson. On the next possession Delaware State took a 14-0 lead off of a three yard rush from junior running back Michael Chris-Ike. On the ensuing drive Wilkerson punched in his second touchdown off of a Dragons fumble. On the following possession the Hornets defense forced yet another turnover in which DSU quarterback Lewis and his offense were able to capitalize off of.

Lewis connected with Trey Gross for the third time in three games to open up a 35-0 lead with just over two minutes in the second quarter. When given another opportunity to score the Hornet offense didn’t leave anything on their plate. Lewis was able to connect with Woodley on a 41-yard strike with just seven seconds left in the second quarter opening up the lead 42-0 at half time.

The Hornets had two 100-yard rushers as Wilkerson and Chris-Ike carried the Hornets to victory. Chris-Ike rushed for 102 yards with a touchdown while Wilkerson was right behind him with 101 yards and a touchdown of his own. Chris-Ike was half of the previous 100 yard rushing duo for Delaware State University, back in 2018 Chris-Ike rushed for 127 along with former teammate Brycen Allen who added in 122 in DSU’s victory 28-13 over North Carolina Central.

Dragon quarterback Darrius Sample was able to throw a 59-yard touchdown pass to Joshua Gray in the third quarter.

Now with back to back victories Delaware State looks to get ready for next weeks crucial matchup against MEAC opponent South Carolina State.