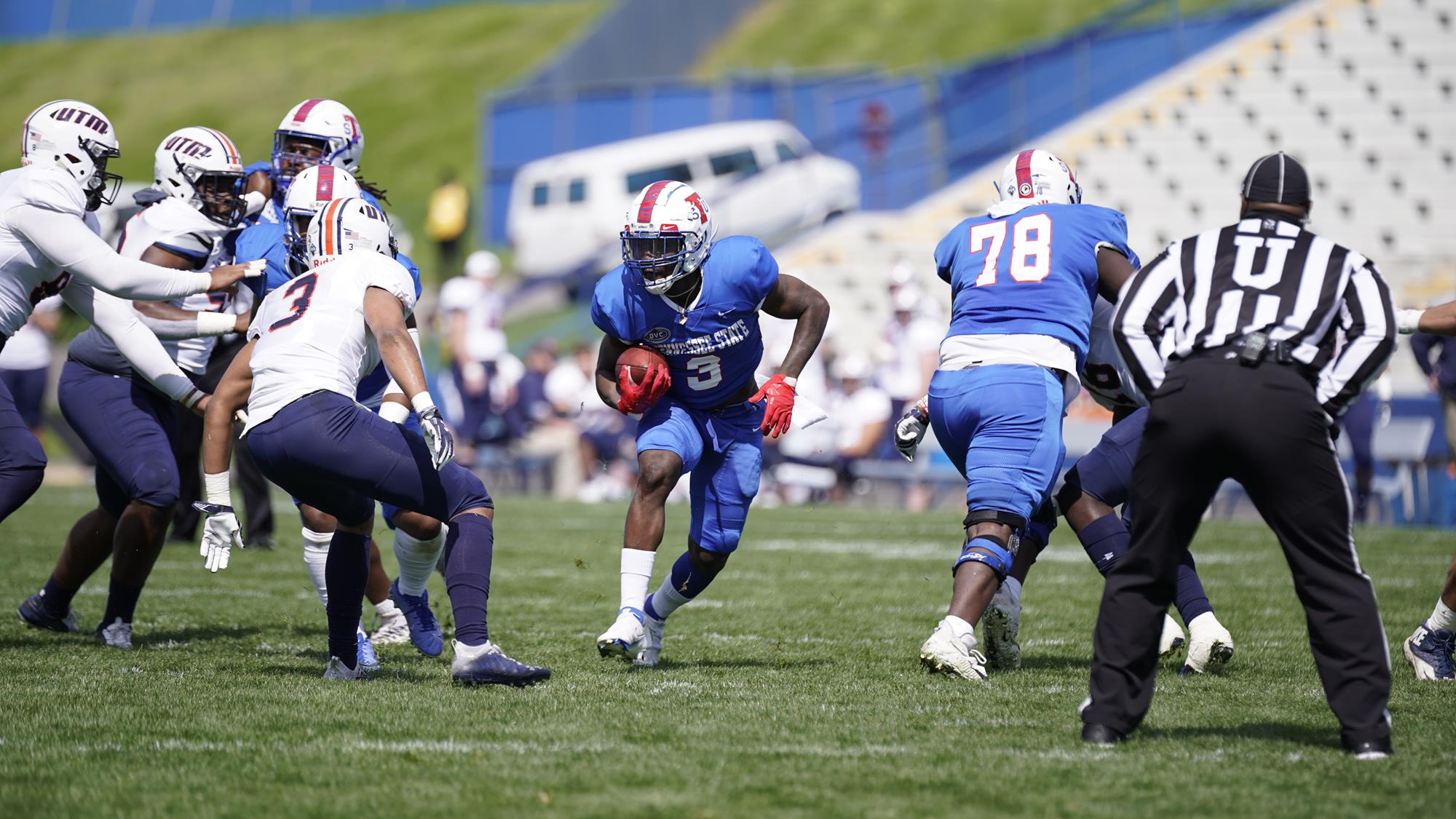 Tennessee State got its first Ohio Valley Conference win in the Eddie George Era by holding off Austin Peay on Saturday night.

CLARKSVILLE, TENN. — For the first time in 679 days, the Tennessee State University football team is victorious on the road after defeating Austin Peay, 24-22, in a non-conference matchup on Saturday evening. The win is also the first D1 victory for first-year head coach Eddie George.

The last road victory for the Tigers came during the last game of the 2019 season at Tennessee Tech, a 37-27 win in Cookeville.

Senior quarterback Geromy Hickbottom finished with 301 passing yards with two touchdowns on 18-of-34 completions and ran for another. This was Hickbottom’s second best career performance for the Grambling transfer. His previous best was 345 yards thrown against Texas Southern on October 13, 2018, when he suited up for Grambling.

The quarterback found his rhythm in the second half with a pair of touchdowns to senior tight end Rodell Rahmaan and a 48-yard rushing touchdown of his own.

Rahmaan finished the game with 129 receiving yards with a 63-yard touchdown in the third quarter followed by a 45-yard touchdown late in the fourth. This was Rahmaan’s first multi-touchdown game of his career.

Rookie wide receiver Zaire Thornton was Hickbottom’s second best option on the night with six catches for 89 yards, an average of 14.8 yards per catch. Thornton’s biggest catch came in the fourth quarter, a 37-yard pass.

Neither team scored in the first quarter until Tigers kicker Antonio Zita hit a 24-yard field goal with 4:13 left in the half. TSU’s defense was on point in the opening half, forcing the Govs to punt the ball on the first five possessions. The Tigers went into the locker room leading 3-0.

Austin Peay tied the game in the third quarter with a 25-yard field goal from Maddux Trujillo.

Tennessee State found the end zone on the next possession with a four-play drive that saw Hickbottom throw his first of two touchdown passes to Rahmaan. Two plays prior to the touchdown, it looked as if the Austin Peay defense got the best of Hickbottom with a loss of 13 yards on a sack. The next play, Hickbottom got back up and threw a 20-yard completion to Thornton for the first down. This moved the chains and prompted the touchdown pass from TSU’s own 37-yard line.

The hosts answered back for the second time with a touchdown on a four-play drive with a 66-yard rushing touchdown by Brian Snead to give the Govs a 10-9 lead with 5:55 left in the third.

Determined to regain the lead, TSU moved the ball to its 41-yard line before Hickbottom found Thornton with an 11-yard pass for a first down. The speedy quarterback then scrambled on the next play all the way to the end zone for a 48-yard touchdown to put the visitors ahead 17-10 with 3:13 left in the quarter.

Austin Peay chipped away at the difference with two field goals from Trujillo.

On the ensuing drive, Hickbottom found Thornton for a 37-yard completion on first down before penalties pushed the Tigers back. On third and 17, Hickbottom stepped back and whipped a hard pass to Rahmaan for his second touchdown this time a 45-yard dagger with 5:33 left.

Putting the Tigers on their heels, AP quarterback Draylen Ellis used an eight-play drive and found Baniko Harley from 16 yards out. The Govs missed the two-point conversion, a failed opportunity to tie the game at 24-all. But again, the Govs had a chance to win the game with seconds remaining, but a stringent Tiger defense held their ground on a pair of laterals by Austin Peay to secure the win.

Tennessee State finished the game with 485 (301-184) total yards compared to 383 from Austin Peay. The Tiger defense sacked Ellis four times and held the Govs to 6-of-19 on third down.