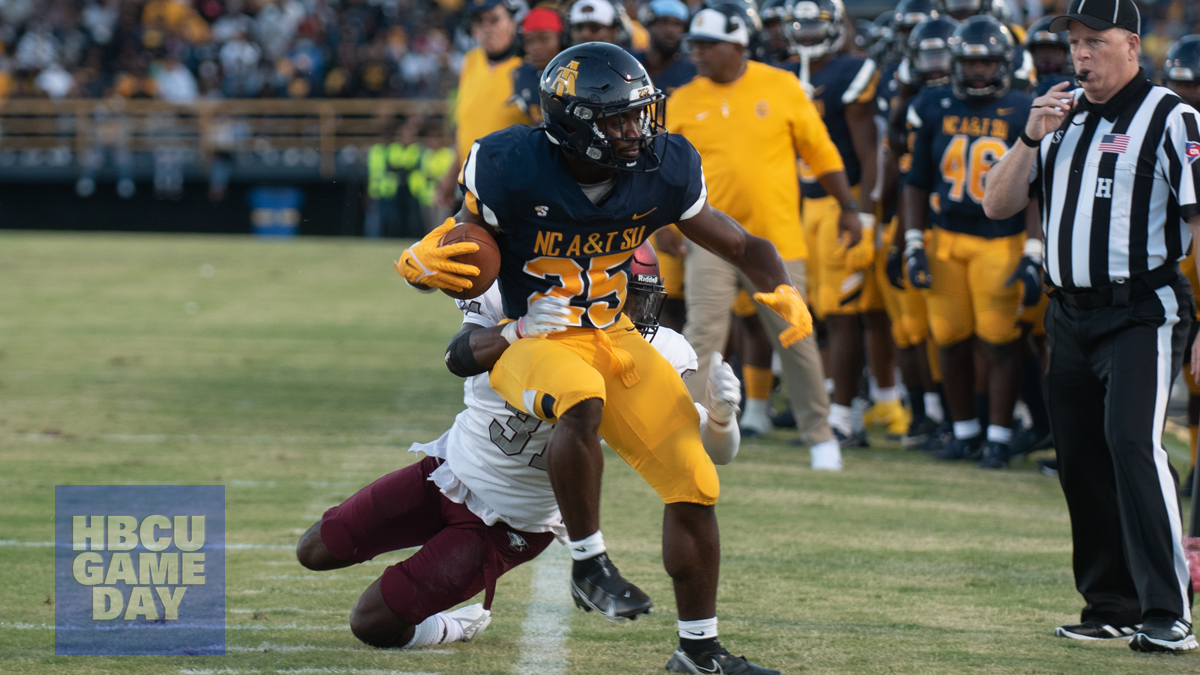 North Carolina A&T picked up its first win of the 2021 season as it beat rival NC Central for the fourth consecutive time. Here’s how.

For the fourth time in a row, North Carolina A&T put a hurting on its neighbor to the east.

NC A&T used a punishing run game to control the clock and beat North Carolina Central 37-14 in its home opener at Truist Stadium in front of just over 15,000 fans.

The win puts A&T at 1-2 on the year as it prepares for its first-ever Big South game against Robert Morris on Saturday.

Outside of the A&T Four, Market Street’s HBCU may be best known for running the football. And it lived up to that billing on Saturday night, doing it and doing it well to the tune of 254 yards. Leading the way was Kashon Baker, who finished with 137 yards on 12 carries. His biggest run of the night was a 47-yard touchdown that put A&T up 10-0 in the first quarter. It was his first-ever 100-yard rushing game at the collegiate level.

“It was designed to hit off tackle to the left,” said Baker about the touchdown run. “I hit off tackle, and then I saw the safety overplaying, and I cut it back. Then I ran to daylight. Catch me if you can.”

Running back Bhayshul Tuten had a solid night on the ground as well, running for 25 yards and a touchdown on just three carries.

“Offensively, we were able to run the football,” Washington said. “I think we had 250 something yards rushing, and whenever you can run the ball, you can control the game.”

NCCU was limited to just 52 yards rushing on 17 attempts, averaging just over 3.1 yards per carry. It ran for just three first downs on the night and was just 3 of 14 on third-down conversion attempts. It also lost the time of possession battle, holding on to the ball for six less minutes than its Big South counterpart. Quarterback Davius Richard accounted for over half its rushing total as Willie Totten was limited to 19 yards and just five attempts.

Which turned it into a one-dimensional offense

NCCU’s passing total turned out to be 225 yards. It’s not Alabama A&M numbers — but its not terrible. But 77 of those yards came on a late fourth quarter touchdown pass to Ryan McDaniel when the game was already out of reach. McDaniel finished with nine receptions for 178 yards and that score. Take that pass away, though, and NCCU spent most of the night dinking-and-dunking with nothing but two field goals to show for it. And even that pass was one that McDaniel made the most of. Through four games, NCCU has yet to show an ability to consistently threaten a defense with the deep ball as it has fallen to 2-2 on the season.

NCCU threw a late interception, but by that point the game was already pretty much wrapped up. The momentum-swinger was a blocked NCCU punt recovered by A&T’s Jazir Stanton to give it a 20-3 lead with nine minutes remaining in the second quarter. A&T, meanwhile, got a solid game (161 yards, TD pass) from Jalen Fowler who didn’t throw an interception and it didn’t lose a fumble.