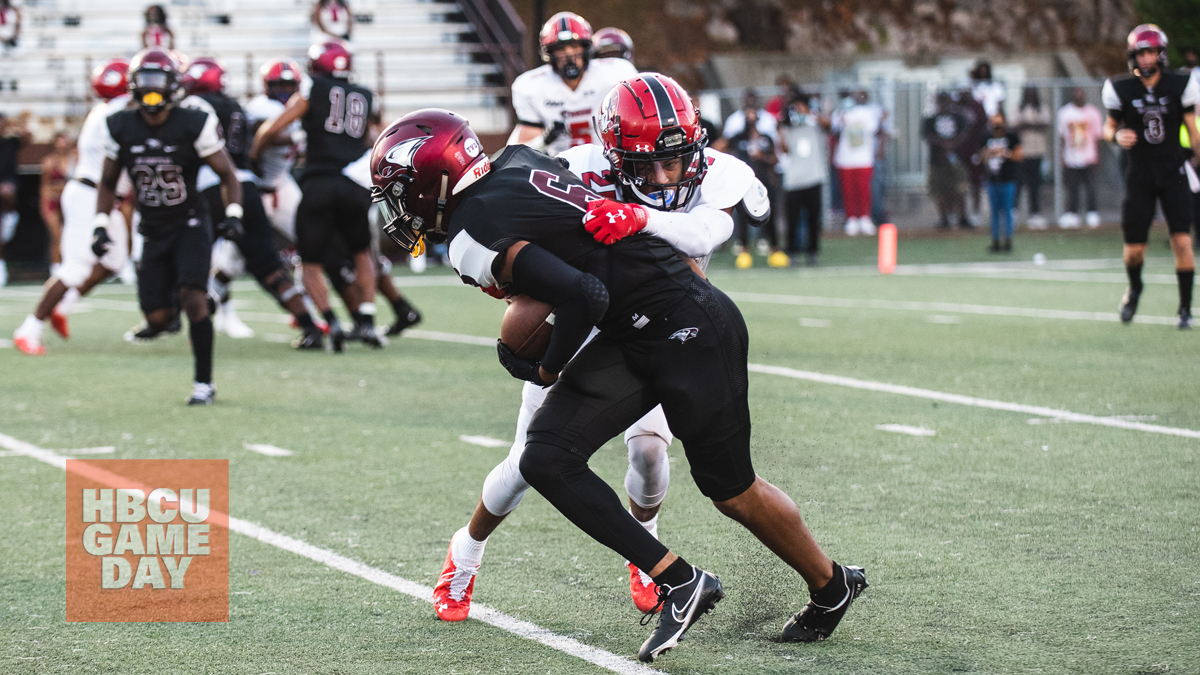 NC Central head coach Trei Oliver expected a dogfight against WSSU, and got one. Now NCCU heads to the dog’s back yard to play NC A&T.

NC Central head coach Trei Oliver knows that many people were expecting a much bigger margin of victory against Winston-Salem State than the 20-13 win his team picked up on Saturday night. But while he acknowledged there were some issues that needed to be correct, he isn’t all that concerned with outside expectations.

“People will say, “well, we didn’t beat them by X, Y, and Z and so on and soforth,” Oliver said during the MEAC’s weekly media day call.  “We play the game to win and we didn’t play as well as we wanted to. But I’m not going to apologize to anybody for an ugly win. Because that’s what it’s about — winning a football game.”

Now NCCU will turn its attention to another former conference foe — arch-rival North Carolina A&T. The two teams are set to meet in Greensboro on Saturday for the first time since A&T left the MEAC for the Big South.

“I haven’t gave that any thought to this not being in the conference anymore. It’s just the next game,” Oliver said. “We’re focused on North Carolina A&T. We’ve got to pull this one out for the alumni, students and the Eagle fans.”

Oliver predicted a “dogfight” against WSSU last week, and he was right on the money. NCCU had held CIAA opponents St. Augustine’s, Shaw and Elizabeth City State to just 42 points in its previous seven games against members of its former conference. WSSU led 13-6 heading into the fourth quarter before NCCU took advantage of field position and marched in for two Latrell Collier touchdowns to come away with the win.

While many people may look at the performance of the FCS team as a letdown against a D2 opponent, Oliver said he was pleased with the fact that his team didn’t sulk while trailing at home.

“I think that said a lot about the character of our football team,” he said. “The guys on the sideline didn’t drop their head. They were down by two scores in the second half. And nobody panicked. The coaches didn’t panic. The guys didn’t panic. You know you need some of those close games like that to really test your ballclub.”

NCCU’s quarterback depth was tested in the WSSU game as well. Oliver made the decision to go with freshman Walker Harris as the game’s starter instead of top quarterback Davius Richards. Richards did come in and attempt one pass after Walker’s helmet came off, but was hurt against Marshall and is currently day-by-day.

“We kinda got banged up against Marshall, and we had to go with the freshman,” Oliver said. “I had all the confidence in the world going with him.”

“We had way too many drops throughout the game,” Oliver said. “Guys wide open. We didn’t help the quarterback out. When you have a freshman quarterback in there, especially in a big game like that — you gotta help make the tough catches, the easy catches, get him some confidence and settle him down in an environment like that.”

Walker was helped by a solid running game. Four backs got carries, led by Collier’s 53 yards.

“All four of those guys played and got about the same amount of carries. Latrell’s a physical, downhill back. And he scores touchdowns. He’s a really good football player — better person. Going to Greensboro, we’re going to have to be able to run the football. We’ll see whose hot.”

The WSSU rivalry game may have been tougher to get his players to understand, given the differences in NCAA division and the fact that the two teams hadn’t played since most the current players were learning their ABCs. He’s pretty confident that won’t be the case this week, even though A&T comes in 0-2.

“They say it’s hard to get your team up two weeks in a row for a big game. Being that we didn’t really play as well as I would like last week, hopefully, it shouldn’t be a problem for us getting up for those Aggies,” he said. “But the guys know what this rivalry’s about, this matchup is. We as a coaching staff have to do a good job making sure the guys are prepared.”

NCCU should have plenty of motivation. A&T has won the last three games of the series, including a 54-0 win over NCCU the last time the two teams met in Greensboro in 2019. Oliver has been on both sides as a player at NCCU, and a coach at North Carolina A&T under Rod Broadway.

“You have an in-state rivalry. The teams are 45 minutes apart. It’s a lot of history between the two programs. It’s going back from way back. It’s been some chippy ballgames and a lot of trash talk. I’d like to say its a love-hate relationship, but it might be a hate-hate relationship,” Oliver said. “But it’s going to be a good one. They’re a championship football team, and we have to play much better than we did this past weekend to matchup with those guys.”