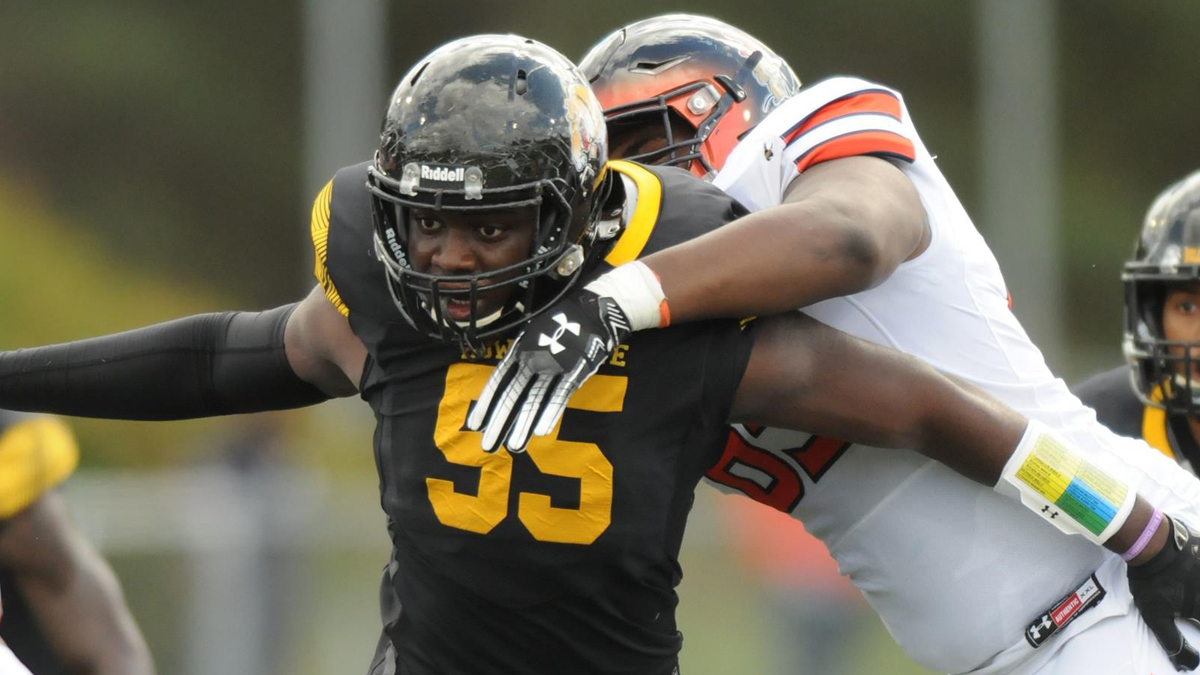 Bowie State, Shaw get three CIAA Players of The Week

Not one, not two but three Bowie State players were recognized as CIAA Players of the Week at their respective positions.

Johnson, a senior and native of Washington, D.C. completed 27-of-35 passes for 409 yards and three touchdowns to lead No. 25 Bowie State to a 28-19 win over Saginaw Valley State. The reigning CIAA Offensive Player of the Year currently leads the conference with 635 yards passing and six touchdowns through the air after two weeks.

A native of Fort Washington, Md., Bowman was Johnson’s favorite target on Saturday, hauling in eight catches for 175 yards. He also recorded one rush for six yards in the win Saturday. The redshirt sophomore currently averages a CIAA-best 95.5 receiving yards per game this season.

Baltimore, Md., native and All-CIAA Preseason pick Pryor finished with game-high seven tackles, including five solos to lead the Bulldogs defense against the Cardinals. The All-American also recorded three tackle for loss, two quarterback hurries, and a half sack as the Bulldogs held SVSU to 174 yards in total offense.

This week, the Bulldogs travel to West Haven, Conn. to face New Haven for the 2021 Harmony Classic on Saturday, Sept. 18. Game time is set for 1 p.m.

Other CIAA Players of The Week

Keck led a Chowan offensive line that paved for the way for 460 yards of total offense, including 325 through the air. Off to their best start since 1999, Keck and the Hawks offense scored 46 points in their double overtime win over Tusculum and are currently averaging a CIAA-best 38 points per game.

FOOD LION OFFENSIVE BACK OF THE WEEK

Gibbs finished with a game-high 110 yards on 15 carries and a touchdown in Shaw’s near upset of FCS-DI Davidson, averaging over seven yards per carry. An All-CIAA selection in 2019, Gibbs has the highest individual single-game rushing total in the conference so far this season.

FOOD LION DEFENSIVE BACK OF THE WEEK

Williams earns his second straight weekly honor after totaling game-high 10 tackles, including five solos, from the cornerback position while also registering a pass breakup. The Fayetteville, NC native currently ranks among league leaders in both tackles (15) and passes defended (3) after two weeks.

FOOD LION LINEBACKER OF THE WEEK

Hunt totaled a game-high 16 tackles, including seven solos and one tackle for loss, on Saturday as Shaw almost pulled off an upset over FCS-DI Davidson. The senior from Hamlet, NC also led all defenders with two pass breakups while helping hold the Wildcats to just 82 passing yards. Hunt currently leads the CIAA with 25 total tackles (12.5 tackles/game) on the season.

McAtamney went a perfect 5-for-5 on extra point attempts and hit a program record 47-yard field goal to help Chowan to a 46-38 win over Tusculum in double overtime and their best start since 1999 with a 2-0 record. The Derry, Ireland native also had five kickoffs for 301 yards with one touchback.

FOOD LION ROOKIE OF THE WEEK

In his first career start, Peters completed 19 of 31 passes for a game-high 196 yards while adding 23 yards rushing against FCS-DI Davidson. The Charlotte, NC native also tossed three touchdowns, including a 33-yarder to Jon Barnes. Peters is currently second in the CIAA with a 64.4 completion percentage after two games.

Bowie State, Shaw get three CIAA Players of The Week