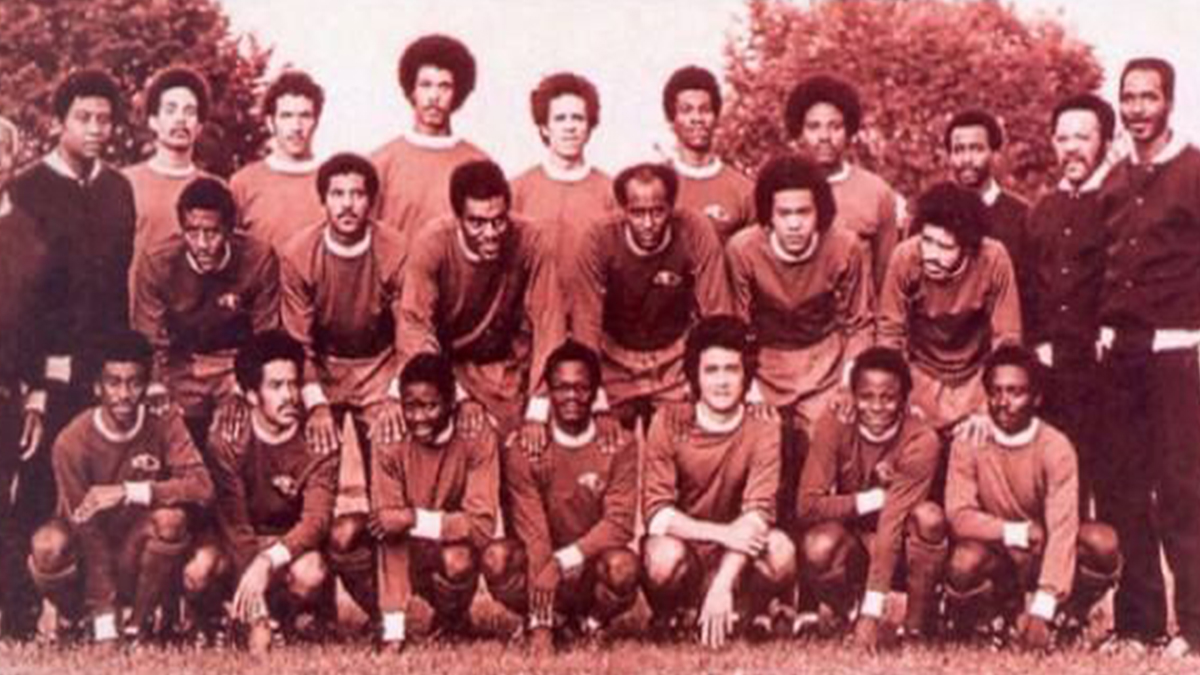 As a student at Howard University in the early 1970s, my friends and I would casually watch the Bison soccer team play at Greene Stadium from a third-floor room and window in the Cook Hall dormitory overlooking the field.

Soccer was not a particular concern of ours as we were tried-and-true, red-blooded black American sports fans. It never dawned on us that the game we were watching had more right to be called football than the game with which we were more familiar.

But interestingly, we noticed that games played against the Bison were often played on just one end of the field, towards the goal their opponents were defending. We found this odd, but refreshingly funny and entertaining, to say the least.

“Why can’t the other team get the ball to Howard’s end of the field,” we’d wonder.

Little did we know – though we came to understand – that that phenomenon was evidence of the Bison’s total domination. That 1974 team finished 19-0 and won the NCAA Div. I championship in a four-overtime thriller vs. a powerful Saint Louis University squad. Perhaps most outstandingly, the Bison scored 63 goals on the season while their opponents – all 19 of them – scored six goals. Total.

Did I mention that Howard is a Historically Black College or University (HBCU) or that it was the first and only HBCU to win an NCAA Div. I championship. Who knew? Turns out, not many. But there’s more to the story.

Taking down a soccer power

That’s the part that Grammy-winning rapper turned Oscar-winning actor Common and Steel Springs Pictures are telling in an upcoming movie entitled, ”Rising Above.”

You see, prior to its record-setting 1974 season, the Bison had won the 1971 NCAA championship 3-2 over an equally powerful St. Louis team. That Howard squad was led by Trinidadians Keith Aqui, Al Henderson and Ian Bain. But that title was stripped away three weeks later by the NCAA, obstensibly for Howard’s use of two ineligible players. St. Louis had won the first NCAA Div. 1 soccer title in 1959 and six of the 11 titles over that span.

The Billikens, as they were called, had a predominantly white squad. Howard’s was all-black made up mostly of African and Caribbean players. The contrast was obvious, to say the least.

Howard ending Saint Louis’s dominance in Div. I college soccer in 1971 could be likened to Texas Western employing an all-black line-up to end the dominance of Adolph Rupp’s all-white Kentucky team in basketball only five years earlier. Texas Western (now Texas at El Paso University) was a predominantly white school – or an Historically White College or University (HWCU), if you will. The NCAA found no discrepancies in their roster. But that’s another story.

Howard was an HBCU. The NCAA found two in theirs.

The road to redemption

“We feel that it is simply because we are a black institution that the NCAA was requested to investigate,” the late Howard University President Dr. James E. Cheek said in an official statement at the time.

Needless to say, the NCAA stripped Howard of that 1971 title and awarded it to the Billikens. Additionally, the NCAA imposed another penalty after the 1972 team lost 2-1 to St. Louis in the NCAA semifinals. The Bison played that game without seven players ruled ineligible that was ultimately reduced to four. As a result of that violation, the 1973 team was put on probation.

Thus began the road to “Rising Again” for the Bison that culminated with the redemptive dominance of 1974. In fact, a 2016 Spike Lee ESPN documentary film entitled, “Redemption Song,” also tells the story.

All those Howard teams were coached by Lincoln “Tiger” Phillips, a renowned professional goalie and football coach from Trinidad & Tobago. It was Phillips who put together the powerful force that became the Bison’s teams throughout the 1970s. From 1970 to 1980, he posted an outstanding record of 117-19-11 and took his teams to the NCAA Tournament eight times. He is now 80 years old.

By the end of that decade, all the top teams in America were recruiting players from Africa and the Caribbean and offering much more than Phillips and the Bison could.

“I’m very excited and grateful to be partnering with Steel Springs on this project,” Common told Variety of the film. “This inspiring story is one we never knew existed and together, are passionate about telling.”