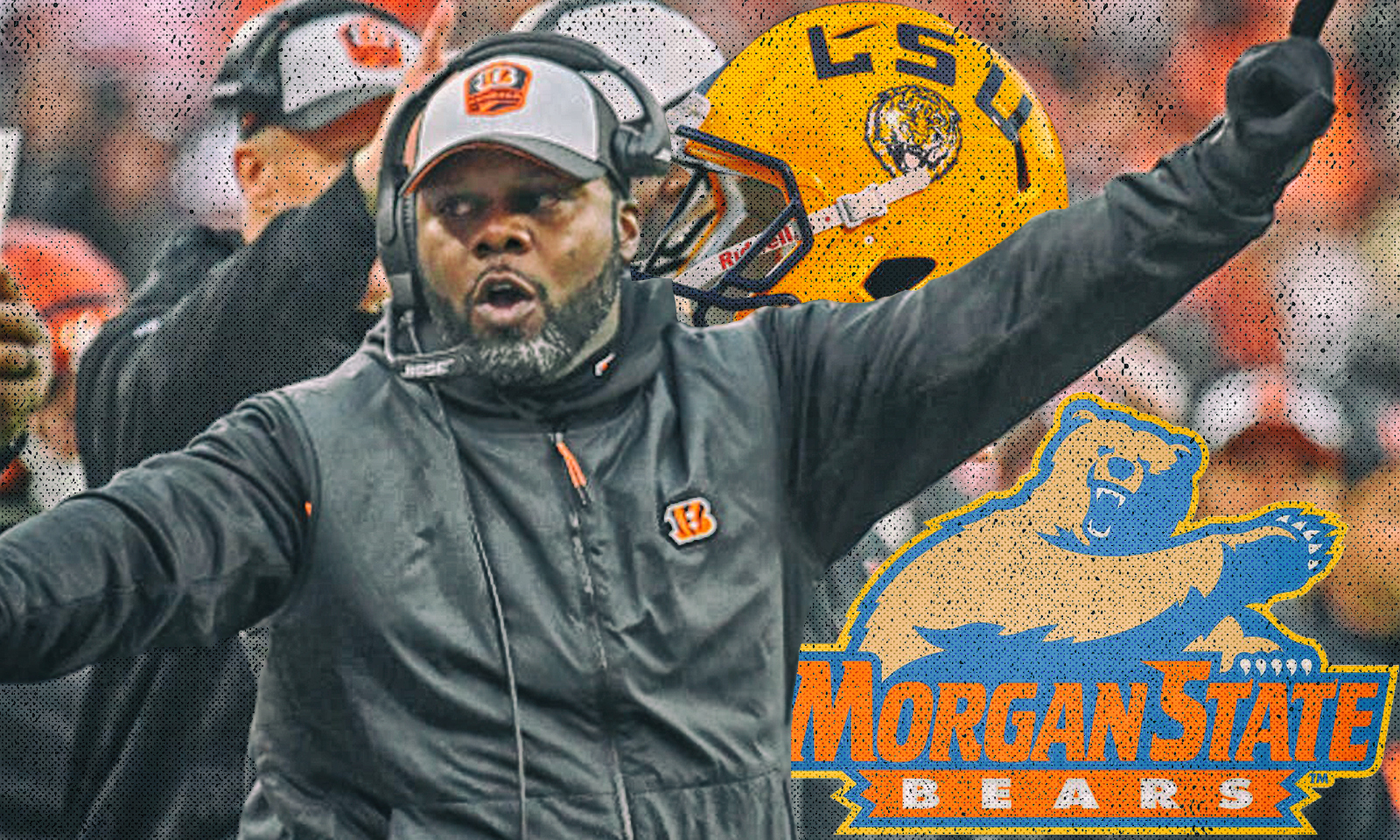 Daronte Jones thought he was in for a similar college experience when he transferred from Temple to Morgan State in the late 1990s.

Little did he know just how much things would change for him during his time in Baltimore.

The former defensive back saw his career end prematurely because of a neck injury, only to segue into a coaching career while he was still a student. That journey has since led him to Canada, Hawaii, multiple NFL stops and now the defensive coordinator job at Louisiana State.

So much of it started during his time as a Bear.

“Transferring to Morgan was definitely one of the best decisions I’ve made in my life,” Jones said recently. “My initial time there was rough, adjusting from a predominantly white college to a Historically Black College (HBCU). The way Morgan homes in and cares about the student is something I wasn’t used to from where I came from. … Real quick, you learn that if you miss three classes, you can fail. There’s going to be class checks. There’s going to be study hall. The institution is going to hold you accountable, but it is also going to guide you along the way until you become mature enough to handle things on your own.”

So much still stands out. The coaches he got to know, who would become professional mentors in due time. The close friends he shared a secondary with, who he remains in regular contact with and whose children for whom he is a godfather.

Even the everyday experiences any player knows all too well.

“If you were strong enough to withstand the challenges of our practice field at that time. …,” Jones said, trailing off with a laugh. “It was different. it’s not what they have now. We had nails and screws and rocks. We used to joke about how the field had a hump on it. The track was cement. Those times, those experiences at Morgan, although a current player may look back and say ‘How did you even do that?’, what we had was better than those that were before us. They helped build character. My time at Morgan helped build my character and helped me to push and see things through.”

It came in handy before he even left campus. Damage to his neck forced him to give up playing before his college eligibility was up. He remained on scholarship, but couldn’t help but to wonder what was going to come next.

“He said ‘Why don’t you help me out and start coaching? You’re one of the captains and one of the leaders on the back end, so just help us out,'” Jones said. “That got me out of my room, got me out of my slump and feeling sorry for myself. That’s how I got into coaching and I enjoyed it.”

JONES ON THE MOVE

So much so that when he learned about graduate assistant spots, he eagerly pursued one. But there was a coaching change after his senior year at Morgan State, and he didn’t receive a GA slot with the Bears when the new staff arrived.

Instead, he went to Division II Lenoir-Rhyne in North Carolina — only for that staff to be fired at the end of his first season. It was an early lesson on the movement a coaching career often requires.

From there, he became an assistant at Nicholls State, where he worked with Mickey Joseph — now LSU’s assistant head coach. He also got to know Joseph’s younger brother Vance, a future NFL head coach who quickly became a mentor for Daronte Jones. After he spent a couple years as a high school assistant, Morgan State had an opening for a defensive backs coach. He didn’t get it.

Instead, he landed the defensive coordinator role at Bowie State, where he worked with some of his former college coaches. He gambled on himself in 2010, taking a GA gig in his early 30s to work at UCLA, fashioning an apartment out of the meeting room he presided over during the day thanks to a few blankets and an inflatable mattress. (“I would always joke with people that I have the best real estate in Westwood,” Jones said. “I have free cable, free electricity, free water. But I slept in my meeting room that entire year.”)

After a year with the Montreal Alouettes in the CFL, his former UCLA colleague Norm Chow asked him to join his new staff at Hawaii.

“The best thing that happened to me was leaving Morgan State and getting under some other tutelage and under some other people who could kind of guide me along the way,” Jones said. “You’d be surprised how the doors that close can be blessings. … The two doors that closed became eye-opening opportunities for me and I never looked back from that point on.”

After making NFL stops in Miami, Cincinnati and Minnesota spanning the last five years, Daronte Jones is back in the college game at one of the top programs in the sport. The 42-year-old is a coordinator for the first time since his Bowie State days in his late 20s, and the move is also a chance to revisit an area that treated him so well early in his coaching career.

“It was an opportunity to come back to Louisiana and an opportunity to work for one of the top programs in the country at Louisiana State University,” Jones said. “I became an LSU fan living here 15 years ago. It’s hard to be living in the state and not become embedded in the purple and gold and what Tigerland is all about. Death Valley is one of those amazing sites I’m looking forward to seeing.”

His return to college football also comes at a time when HBCU programs are receiving more attention than they have in decades. Some of it stems from an increased appreciation of what those schools have contributed to both academics and athletics. Even if it wasn’t always fully appreciated at the time.

But there’s no question some of it is tied to prominent names taking over as head coaches. This season Hall of Famer Deion Sanders (Jackson State) made his head coaching debut, former Heisman Trophy winner Eddie George (Tennessee State) was named head coach, and Morgan State’s Tyrone Wheatley, a star running back at Michigan who played a decade in the NFL, is in his third season with the Bears.

“I look at it as coming full circle,” Jones said. “There were times when the only opportunities minorities had to attend college was an HBCU. It’s kind of fitting the HBCUs are again providing an avenue for former players who aspire to be coaches who have a wealth of knowledge and they want to share that knowledge and they want to build young men. If other schools are not giving them opportunities — if they feel the experience is not there in the coaching aspect — then HBCUs are. It’s a great supporting culture that HBCUs provide and it goes back to that nurturing feel I experienced when I transferred and how they give you the opportunity that some may not.”

For his part, Jones has an exceptional opportunity in Baton Rouge — one that could ultimately lead to even more down the road. While Jones acknowledges he has dreams of having a team or a program of his own, he remains firmly planted in the task at hand.

“I would love to become a head coach in this profession,” Jones said. “That’s the long-term goal. I would like to think most coaches have that goal if you’re in this profession, at some point in time. I’ve learned under so many head coaches and I would love to take a combination of all the things I’ve learned and applied and see what happens, if that’s in God’s will. But the initial thing I’m focused on right now is trying to help LSU become one of the top programs in the SEC [this year] and help us win and help us be successful.”

Jones acquired much of the resolve and resourcefulness any coach needs at Morgan State two decades ago. And the experiences stemming from his decision to become a Bear continue to inform who he is as a coach today.