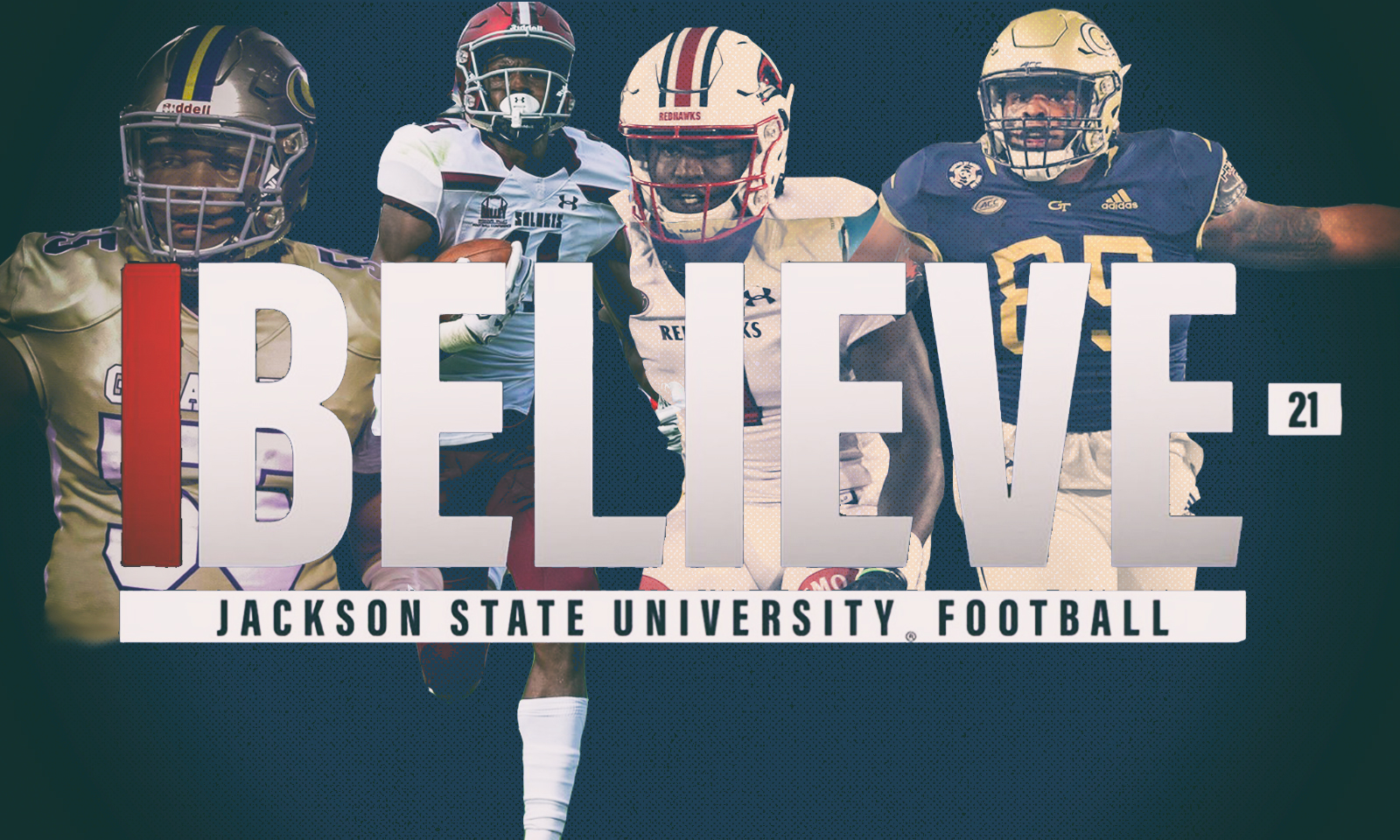 Six newcomers – a mix of high school. junior college, and transfers – join the program and are eligible this fall.

Six newcomers – a mix of high school. junior college, and transfers – join the program and are eligible this fall.

JD Martin brings speed and athleticism to the Tigers’ backfield. A four-star running back out of high school, Martin’s pure athleticism forced him to play quarterback and he amassed 3374 yards of total offense and 35 touchdowns at Wetumpka High School before an injury forced him to miss  senior season. In 2019 Martin played at East Central Community College and was the team’s primary running back. Martin rushed for 858 yards and five touchdowns and averaged 5.9 yards per rush. An all-purpose running back, Martin recorded nine receptions for 77 yards. Martin received several offers from FBS programs but chose Jackson State.

Michael Webb adds size and pure strength to the Tigers’ defensive line. Webb is known for his explosive first step and excels as an interior pass rusher that wreaks havoc in the backfield. This past Spring Season and as a true freshman, Webb worked his way into the rotation for the Leathernecks. Webb added seven tackles and one tackle for loss. Webb received offers from several FBS and FCS programs but chose Jackson State.

Al Young brings experience and play-making ability to the Tigers’ secondary. In 2019, started the first four games of the season before suffering a year-ending injury.  Notched 10 tackles and had two interceptions and posted a season-high six tackles at Missouri (Sept.13). 2018 Started 11 of 13 games at cornerback and collected 30 tackles, including 22 solo stops. Had two interceptions and tied for second on the team with nine pass breakups. Finished with a season-high five tackles vs. Jacksonville State (10/20) and at #3 Weber State (Dec.1) and posted one interception at Southern Illinois (Sept.15) and vs. Austin Peay (Oct.13).

In 2019, appeared in the first eight games of the season, making seven starts at defensive end, before suffering a season-ending injury. Ranked fourth among defensive linemen with 21 tackles (10 solo) on the season and one of six Yellow Jackets to record an interception on the season, an 18-yard return against North Carolina (Oct. 5) – the first of his career. Started the year with five tackles (four solo) in the season-opener at then-No. 1 Clemson (Aug. 29) and recorded a career-high six tackles (three solo), including the second sack of his career for 1 yard, against The Citadel (Sept. 14). Had two tackles in back-to-back games – at Temple (Sept. 28) and vs. North Carolina (Oct. 5) and Forced overtime at Miami (Fla.) (Oct. 19) when he blocked their 35-yard field goal attempt with 26 seconds left in the fourth quarter en route to the thrilling 28-21 victory. Registered four tackles (two solo) and a pass breakup at Miami. In 2018, Appeared in all 13 games as a member of Georgia Tech’s defensive line rotation. Finished the season with 21 tackles and opened the campaign with a career-high four tackles against Alcorn State (Sept. 1). Went on to have multiple tackles on five more occasions – three vs. Clemson (Sept. 22), Bowling Green (Sept. 29) and Virginia (Nov. 17) and two vs. North Carolina (Nov. 3) and Miami (Nov. 10). Returned a fumble 21 yards to set up a touchdown in the rout over Bowling Green. Saw the field as a true freshman in 2017, Appeared in eight games as a reserve defensive lineman and recorded a sack in his collegiate debut versus Jacksonville State (Sept. 9). Also had tackles at Miami (Oct. 14) and Virginia (Nov. 4) and was one of nine true freshmen that saw action for the Yellow Jackets.

Prep: Rated as a three-star prospect by ESPN, 247Sports and Rivals. Played defensive end and tight end as a prep and was a three-year letter-winner. All-state honoree and three-time all-area selection. Named one of the top 100 players in Florida by Orlando Sentinel and intercepted two passes from his defensive line position. Holds school record with four sacks in a game and helped lead Godby to a district championship as a sophomore in 2014. Three-year honor roll student and member of National Honor Society.